Round 10: Noah Boeken vs. Carlos Barrado 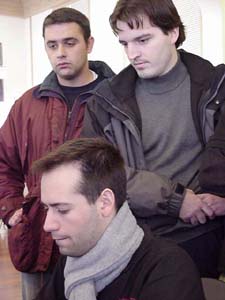 Noah started the round off by introducing Carlos to the time honored tradition of the feature match area: throwing the dice not only to decide who draws first but also who gets to sit with the library on its right side. A lot of players prefer to have the deck on his right side and the current layout forces one of them to have the library and graveyard in the left side.

Carlos Barrado is one of the best known Spanish players with a Grand Prix Madrid win and one national title in his resume and a lot of other strong results over the years. Boeken is, of course, the former European Champion with some brilliant results on the Pro Tour, including individual and team Grand Prix and a Masters' title in Tokyo.

Barrado had a huge crowd behind him before the round even started and he came out smoking with a turn-two Minotaur Explorer followed by a Werebear and Krosan Archers. Since Noah is playing white-blue, Barrado knew he needed to get some damage in fast before the Dutch could lock up the ground.

The first signal of the lock came with a Blessed Orator. Barrado tried to kill it with a Blazing Salvo, or at least keep it from blocking, and Noah decided he rather keep the creature and drop down to eight during combat.

Sadly that didn't save the Orator who got shot down by a Firebolt. Now is trouble Noah was forced to chump with an Aven Fisher but Barrado wouldn't step off the throttle: in came an Elephant Ambush.

Another Fisher show up to block, along with a Cephalid Scout and the Spanish actually stopped to think before sending everyone in. The crowd behind Barrado seemed to dwarf the whole table and the hard-pressed Boeken as he dropped to one and drew his final card. 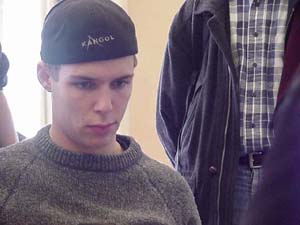 In seven minutes the game the first game was over. This is what green-red has to do to win this match-up: a true Blitzkrieg before the slower blue-white deck can close the gates.

Noah (aiming for the understatement of the tournament): "You had a nice draw."

Despite his first loss, Noah kept his good humor while sideboarding and shuffling, smiling to the little kid standing behind Barrado peeking at the cards. (Further investigations, with Juan Tavira's help, revealed that the boy is seven-year old Miguel Folgado Jr., the youngest member of a large Magic playing family.) The Dutch, however, wasn't so pleased when he had to mulligan.

Still he was forced to keep a one-land six-card hand and again face a Minotaur Explorer on the second turn. When he finally found his second land the Explorer had an Ember Beast and Halberdier to keep it company.

Noah knew he couldn't mulligan down to five against the speed-demon deck and he took his chance. Sadly for him the deck didn't save him early on and Barrado's start was too devastating. The whole round was over in fifteen minutes.