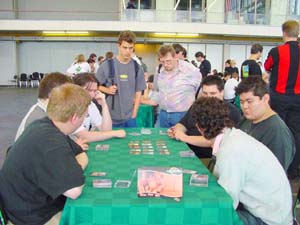 Object of Affection are all members of team Punisher, Anton Jonsson, Jens Thoren and Tomi Walamies. After nine rounds they lead the standing with eight wins and a draw, close behind in second place are Rankko Bongo Wheshiwheshi, a bizarrely named alliance between the two top South American players, Jose Barbero and Carlos Romao, and that colossus of French Magic, Wilfried Ranque. Unfortunately this reporter didn't wake up in time to watch the draft, so this report will have to be without the benefit of knowing what morphs each player has.

Anton only had Mountains in the early game, and a grip full of blue spells. A Goblin Taskmaster of his traded with Jose's Voidmage Apprentice, but then all Anton could cast was a fourth turn Skirk Outrider. Jose got some beatdown in with Mistform Seaswift and a fifth turn Covert Operative.

On Anton's fifth turn he cycled and managed to find an Island. He cast Imagecrafter which could make his Skirk Outrider bigger but didn't answer the unblock able creatures. Barbero's attack knocked him to eleven and Jose tapped out for a Warped Researcher.

Anton drew four cards with a Rush of Knowledge, and Spark Sprayed the Seaswift. He then attacked with the Outrider and made it a Beast. Jose dropped Crested Craghorn and swung in for ten, putting Jonsson to one. Despite the large amount of cards in Anton's hand, none of them was an answer to the Covert Operative, and he scooped.

This was the first game to finish. Jens and Carlos were locked in a white black mirror match where Carlos had a Stinger and Jens had a Whipgrass Entangler. Historically the matchup favors Soldiers, although I didn't see what cards were drafted, as the cleric deck is very easy to counterdraft. Just picking up it's Whipgrass Entangler for your Soldier deck, as well as any Misery Charms you see, will often be too much for the clerics to deal with. 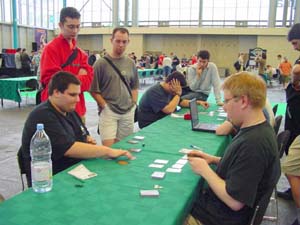 Wilfried and Tomi seemed to be playing at a very sedate pace in their Green-Black mirror match, the third mirror match of the draft.

In Anton and Jose's second game, Jonsson found both of his colors of mana this time, and his draw was fairly reasonable. He used Gempalm Incinerator to kill a Goblin Sledder, then morphed a Raven Guild Initiate and played a Keeneye Aven. Jose used Echo Tracer to bounce the Keeneye Aven and shot the Initiate with a Skill. Barbero's draw was rather good – Anton played a Frozen Solid on the skilled Wizard, but Jose had a Chromeshell Crab to donate the now pointless Tracer in exchange for Keeneye Aven.

By this time the first game between Jens Thoren and Carlos Romao was over, with Carlos winning, Wilfried and Tomi were still bogged down in their first game.

Jens Thoren was doing a lot better in his second game, as when I joined it he had Graveborn Muse, Bladewing's Thrall and Whipgrass Entangler in play. Carlos had two morphs and a Cloudreach Cavalry. Jens attacked with the Thrall. Romao double-blocked and flipped Defender of the Order to kill it, but realistically Jens card advantage from the Muse was going to be too much. Thoren dropped Dragon Shadow on Fallen Cleric. He attacked with that and a Vile Deacon. Carlos unmorphed Frontline Strategist, unfortunately he didn't have enough creatures to kill the Deacon with the Fog effect.

At this moment, Wilfried Ranque won his first game as well, to put RBWW on the brink of winning. Jens Thoren managed to level his match at 1-1 when he gave the Fallen Cleric a clutch of Undeath to make it an eight power fear creature.

In Game 2 of his match, Tomi Walamies had a dream draw. Third turn Krosan Warchief, fourth turn Timberwatch Elf. The Warchief allowed him to accelerate Kurgadon and Needleshot Gourna. The Gourna dealt with Wilfried's only real threat, a Sootfeather Flock. Between the Warchief and Gourna, Tomi had enough regenerating blockers not to need his Timberwatch Elf on defense.

He only had the mana to regenerate one of them, so Wilfried attacked with his Barkhide Mauler, Sootfeather Flock, and Wirewood Guardian. Jens had to let his Gourna die when Ranque unmorphed Patron of the Wild on the Flock. It didn't make the slightest bit of difference anyway, as his remaining card in hand was Ambush Commander. This made the Timberwatch Elf a little insane. Tomi attacked with his angry Forests and Wilfried conceded. 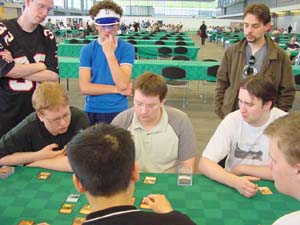 Things were looking very good for Jens in his third game. He was keeping all of Carlos' creatures at bay with a Whipgrass Entangler as he swung in with Essence Sliver and Bladewing's Thrall. It quickly became clear that this wasn't a game that was going to matter in any case – Tomi was stuck with only Swamps as land in the deciding game between himself and Wilfried.

Ranque was so far ahead he could even forget to use his Corpse Harvester once. Tomi couldn't unmorph his guys at all, and Wilfried had so much mana he could unmorph his Root Elemental, dropping another gigantic fatty on the mana-screwed Walamies. Tomi drew another uncastable green card, and scooped in disgust.

This made the deciding game between Carlos Romao and Jens Thoren a dead rubber. Jens managed to pull it out with an unblockable Anurid Murkdiver. This was pacified but then a massive Vile Deacon did the rest, to salvage some pride for his team from the draft.

This should be enough to see the South American/French team into the top four. The Swedes now have to win their last match to join them.