Round 10: Olivier Ruel vs. Frederico Bastos 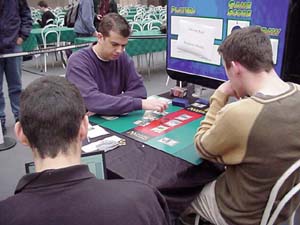 They have known each other from the Pro Tour for a while so the start of the round was filled with stories about the last Pro Tour, the Masters and travel. A coin toss and a handshake later they were on their way in the dreaded SuperGrow mirror match.

Olivier: "So this has been a good week for you."
Frederico (laughing): "So far."

Ruel started of with a Brainstorm and had to think for a bit before resolving it. He had no extra lands so he knew he was stuck at one and by playing Land Grant burying two important cards. Ironically on the other side Bastos had just kept a hand with more land than he would need.

In fact he only had one spell in his seven cards but felt he shouldn't push his luck by taking a mulligan with such a land-depleted deck.

A Land Grant showed Bastos a Werebear, Swords to Plowshares, Mystic Enforcer, Sleight of Hand and Gush. That fuelled a second turn Quirion Dryad from the French but Bastos was right on his case with his own Whip Lady.

Olivier: "I don't want to play this matchup. We will probably draw, right?"
Frederico: "You just have to play really fast or otherwise we will draw."

So the French turned on the turbo with a Swords on the Dryad before attacking. A Meddling Mage, locking Foil that he had seen on another Land Grant, joined the Portuguese team as the pace picked up.

Olivier's third Land Grant showed the Foil, Werebear, Gush and Mystic Enforcer. The Baby Dragon came into play and all of the sudden Ruel was a graveyard card away from having ten points of damage on the table.

Bastos took a deep breath and played his own Enforcer, still very far from having Threshold. The French Monsters attacked and a Gush and a Brainstorm later, left Bastos at two life.

The French played MegaBear to give Frederico an extra headache and passed the turn. A Wild Mongrel showed up to give Bastos' three blockers. A Meddling Mage, from Ruel, locked Swords out of the game, and the hit crew entered the red zone.

Bastos threw away most of his hand so his Enforcer could fly and block his incoming namesake. The whole combat phase turned into a blood bath leaving only the Meddling Mage and a MegaBear on the French side.

Olivier: "Drawing Gush would be a good start."
Frederico (flipping the card): "Swords. That won't help."

This time it was Bastos showed of his hand to play a first turn Land Grant: Werebear, Swords To Plowshares, Land Grant, Mystic Enforcer. He followed that with a second turn Legacy's Allure. 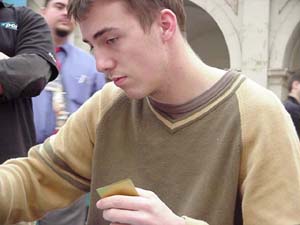 Olivier played his own Allure further thickening the plot. Whoever played an important creature first would now trigger long "let me think for a bit" periods.

The Portuguese played a small Werebear and with a handful of non-creature spells (including three Land Grants) Olivier started thinning his deck. Keeping with the creature theme Bastos upped the ante with a Mystic Enforcer (four cards in the graveyard).

A Swords got rid of the Enforcer straight away but Ruel seemed to do little else than draw lands. Eventually his constant Land Granting finally paid of when he found himself a foily MegaBear.

Olivier: "Same table position, same number of cards in hand and graveyard. But I won Game 1!"

He wasn't so happy when Bastos played another Enforcer and he promptly stole it with the Allure. He tried to Gush and Bastos had to figure if he could blow his own Allure. If he did and the French could answer by reaching Threshold he would be facing a huge Enforcer with no immediate solution.

Despite having lost the first game he took a long time to figure out the tricky play. Eventually he let the Gush resolve. A Brainstorm later Olivier Ruel had himself a stolen big flyer.

They both started laughing when Olivier tried to play a Mind Harness on the Bear and a fight ensued over it including a Submerged Bear and a Wane on Bastos' Allure.

Bastos took the opportunity to Sword his treacherous Enforcer but had little more he could do to stop the double Bear offensive team Ruel assembled, along with a Legacy's Allure.

With the Portuguese digging for answers the two bears started taking bites out of the Portuguese's life totals. A Phyrexian Furnace tried to eat away the French's graveyard and on the final swing tried to steal the Threshold from Olivier

A sideboarded Interdict put a stop to that by bringing up the graveyard up to the magic number of seven. Just enough for the two Werebears to finish the game, and the round.