First and second in the field going into this round, Olivier and Pierre were already playing for top eight, as the winner would almost certainly be in. Both of these players have competed in multiple Pro Tours in the past, and Pierre is a former National Champion. 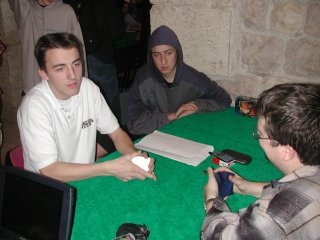 Olivier's opening hand only had one land in it, so he had to take a mulligan, and the second had no land at all. He eventually kept a five-card hand with four land and a Tsabo's Web, hardly ideal. Meanwhile, Pierre's hand had plenty of land, but no spells. Unlike Olivier he managed to find a playable hand with six cards in it.

Pierre played a Llanowar Elf on his first turn followed by the Fires of Yavimaya, then a Bird of Paradise and a second Fires. Hardly a terrifying draw, and Olivier was drawing good cards every turn. He now had Absorb, Wrath of God, and Accumulated Knowledge in his hand.

Malherbaud attempted a Saproling Burst and it was of course Absorbed. Pierre was now out of real threats and had to resort to casting Aura Mutation on his own Fires of Yavimaya, to attack with three tokens. Olivier cast Wrath of God to clear the board, and all Pierre had was another Fires, his third of the game.

Malherbaud drew and cast a Blastoderm, but Olivier used Fact or Fiction to find an Absorb, countered it and then played a Story Circle. Olivier had plenty of cards in his hand due to the Accumulated Knowledges and his Fact or Fiction, and drew two more when he Dismantling Blowed a Saproling Burst.

Ruel was now in complete control, and played a Millstone followed by Mageta, the Lion. Olivier tried to win by attacking with Mageta, but Pierre killed it with Urza's Rage, and so Ruel had to Millstone him to death. The game carried on for a few minutes, but Pierre didn't even try and cast a spell, until with only about fifteen cards left in his library he finally got enough mana to cast Obliterate.

He then played a Llanowar Elf and attacked with it for his first damage of the game, but Olivier had not been keeping land back in his hand, and only had two left. However, Pierre only had twelve cards left in his library, and Olivier was still on twenty-two life from the Absorbs. Pierre played a Flametongue killing his own Llanowar Elf as he needed the Red damage with Story Circle in play.

The Kavu attacked and brought Olivier to seventeen. Ruel Milled, the Kavu attacked. This happened three times but the Fires of Yavimaya meant that Pierre won the race with no cards left in his own library, as he sacrificed them to deal exactly enough damage to take the first game.

Olivier started and Absorbed Pierre's third turn Blastoderm, leaving Pierre with a Llanowar Elf and a Bird of Paradise, but Ruel didn't have a second counter and had to allow a Blastoderm into play.

He cast Fact or Fiction which revealed a Wrath of God, clearing the board once again. Pierre just played a Llanowar Elf as he was already out of gas, but as the first game had taken such a long time Olivier had to try and find a way to win quickly, while being wary of Obliterate.

He had to Dismantling Blow his own Tsabo's Web to find something, but he drew a Millstone and started the process of trying to grind Pierre to death. A judge was watching but didn't seem to mind the horribly slow pace that Pierre was playing at, and Olivier would struggle to win the game in the time remaining.

A second Millstone improved the pace of the game, and now Pierre resorted to looking through his graveyard to see what was in there, but Olivier playing a second Millstone proved to be a mistake, as Pierre drew an Obliterate and destroyed both of them.

Without a way to win in the time remaining, Olivier conceded.