Round 10: Osamu Fujita vs. Masahiko Morita

The cream has definitely risen to the top of the standings this weekend. The only two undefeated players going into the ninth round of play are also two of the best-known. Osamu Fujita, king of the down turned mouth, and Masahiko "Mister Second Place" Morita. Both are playing Red-White Slide, a testament to the deck's power. 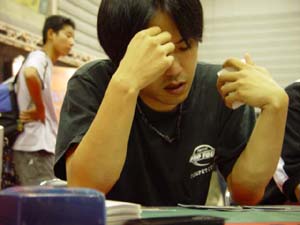 Fujita stayed on a hand of three Angels, Rift, Silver Knight and two lands. Morita mulliganed, and then kept his six. Unfortunately, his second land was a Temple of the False God, so it looked like Fujita would get a chance to draw out of his predicament. However, after a second turn Rift, Fujita's third land was Temple as well, and they both needed help to draw out of it.

Morita ripped land number three, and Chartooth Cougar gave him a fourth. Fujita drew another Temple. Morita dropped a Rift of his own, and then a second Temple, hitting five land first. Fujita followed suit, but had only a single white to work with. They Rifted each other as they cycled for action. The life totals were soon fourteen to ten for Morita.

Morita finally got on the board with a morphed Angel and enough mana to flip it over. Fujita considered Starstorming it away, but opted to check his draw step. It gave him a plains for Akroma's Vengeance. His joy quickly turned to dismay as Morita tapped eight for Akroma herself, easily outclassing Fujita's Angels. He played one as a speed bump. It got mangled. Then Morita showed him a Slide as a security measure. He also had an Exalted Angel. Fujita drew, and conceded.

Both players matched third-turn morphs in the second game. Fujita drew his fourth-turn card slowly, but it refused to be a land. He hit for two and played a Temple of the False God. Morita had no such difficulty, and after worrying about the threat of Wing Shards, flipped up his Angel and swung in. Fujita found a Secluded Steppe the turn after, switching on his Temple and letting him return fire. 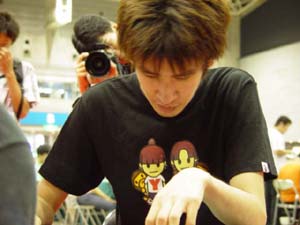 Fujita kept his Angel home and then Fujita did the same. They built still more mana. Finally, Morita hit eight land and dropped Akroma, Angel of Wrath, swinging in. Fujita took it, then weighed his options at end of turn. He needed one more land to cast an Akroma of his own. He could cycle Akroma's Vengeance to get rid of Morita's legend, and hope to draw the land he needed. He could Oblate his own Astral Slide to increase his odds. He even had a second Slide in hand.

He chose not to, playing the safe route of Vengeancing away the board. Morita tapped out for another copy of the Legend, bringing Fujita to twelve life. He played out his Astral Slide, and took another hit, falling to six. At end of turn he struck, sending out Eternal Dragon and removing Akroma, then untapping and playing his own version. He chose not to risk the chance of Wing Shards. Morita lost his Akroma and had to sweep the board with Vengeance.

Fujita brought back his Eternal Dragon and waited. Morita played yet another Akroma, forcing Oblation out of Fujita's hand. His last two mana bought him a Lightning Rift, which could very well give him the match. Fujita frowned at his hand. He played an Astral Slide and morphed an Angel, sitting on Decree of Annihilation. He hoped it would be enough.

Morita drew and passed it back. Fujita shrugged and swung in, turning over his Angel. Morita showed him Wing Shards. Fujita could only shake his head. Sure enough, Morita had the cyclers to finish him off.