Round 10: Patrick Mello vs. Ben Rubin 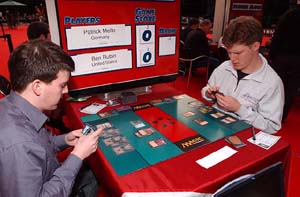 Patrick Mello is one of Germany's top players and is having a good year at the moment with multiple Top 8's in the Grand Prix and high finishes on the Tour. His opponent, the American Ben Rubin, is going through lean times at the moment.

With 3 losses and a draw both players are probably out of contention for the Top 8, but still have the Top 16 to fight for. It will be difficult as Ben Rubin has a very poor looking white-black deck. Mello is playing blue-black.

Mello won the die roll and elected to make his opponent start.

Rubin chose to cycle a Tainted Pact into a Wererat and then cast the same Wererat a couple of turns later only for Mello to steal it with a Butcher. Rubin had a back up Wererat but a lack of early plays left him facing down a Torturer, Butcher and Skywing Aven. Face of Fear was his answer on turn 6 to keep the butcher at bay.

A Patriarch's Desire combined with the Torturer made mincemeat out of the second Wererat.

"You have to look away from this play," Rubin said, casting Restless Dreams to get back the Dirty Wererat.

Mello summoned a Zombie Assassin that Rubin neutralised with a Kirtar's Desire. The Skywing Aven was still a problem for the American though.

Rubin thought for long time to try and find an answer. Eventually he decided to attack with the Face of Fear and Mello blocked with the Desired Assassin. Rubin looked so despondent about his lack of good cards he put the Face of Fear even before Mello got round to activating the Torturer to finish it off. It meant Rubin's Hallowed Healer would survive for an extra turn though. 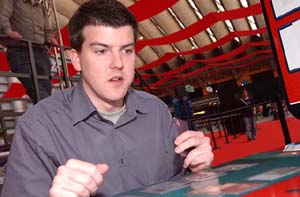 It was not looking good though when Mello summoned a Whispering Shade.

As expected the Healer died at end of turn and then Mello sent the evasion creatures in to finish Rubin off.

Rubin decided he wanted to go first. His first monster, a Dusk Imp, was promptly shot out of the sky by a Psionic Gifted Aquamoeba. Mello piled on the agony as he followed up with a Whispering Shade.

It gone in one hit before Rubin drew a Kirtar's Desire to neutralise it.

In his main phase Rubin went for a Tainted Pact and turned down Teroh's Faithful, plains and Cease Fire before taking the second Tainted Peak. This allowed Rubin to kill the Gifted Aquamoeba with a Fiery Temper.

Both players then said go a lot as their decks refused to cough up anything exciting.

Mello managed to find a Cephalid Scout to break out of a land glut, but only got a couple of uses before a Ghastly Demise picked it off.

Rubin found a Hallowed Healer and was disappointed as Mello dropped a second Gift on the Shade and nipped off the Healer before it could get active. 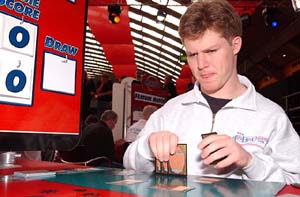 It didn't really seem fair on the American as his Face of Fear got sucked under a Butcher. Even when he tried to cycle Equal Treatment this gave Mello the opportunity to ping him for 2 instead of 1 with the Gifted Shade.

Rubin tried to block the Butcher with an Aven Archer and pump it with Gallantry.

Mello had Rites of Refusal.

The German seemed to have an answer to everything Rubin tried and after another unhelpful draw the American held out his hand.