Round 10: Peter Szigeti vs. Brian Kibler 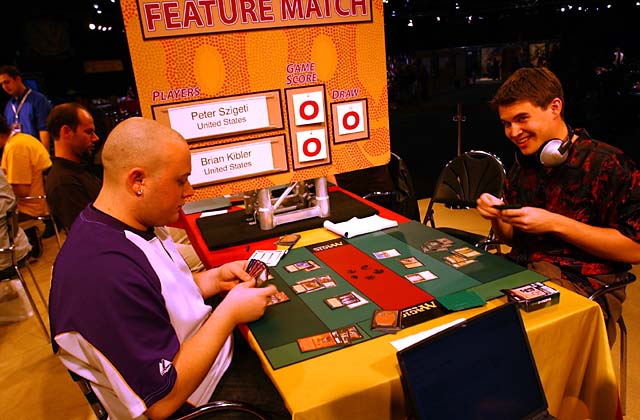 This match saw two of the Pro Tour's most famous personalities go head to head. Brian "Dragonmaster" Kibler is known for his love of fatties, and his Pro Tour Top 8 commentary. Peter Szigeti is Magic's newest villain that everyone loves to hate. Both have something to prove. Kibler's first and only Pro Tour Top 8 was at Pro Tour Chicago about a year and a half ago, and Szigeti is still looking for his first Pro Tour Top 8 finish.

Szigeti kept a one land hand and missed his second land drop, but made it on the next turn. He played Frightcrawler, and Kibler answered back with Cabal Torturer. The Frightcrawler attacked for one, and Innocent Blood cleared the board. Kibler rebuilt with Dirty Wererat, and Szigeti still couldn't find a second land. He played Mesmeric Fiend, taking Crippling Fatigue, but it didn't mean much considering that Kibler had a full grip and all the mana in the world. Szigeti eventually drew a third land.

Slithery Stalker took out Kibler's Aven Flock, and Flame Burst killed a freshly summoned Hallowed Healer. Gravegouger was answered by Kibler's Angelic Wall, and suddenly Szigeti was doing an impressive job of staying in the game despite his awful start. However, Kibler's Wererat was still getting through for two a turn, and Angelic Wall, Border Patrol and Pilgrim of Virtue meant that only Szigeti's Slithery Stalker could get through for damage.

Following that, Ghastly Demise killed Angelic Wall, and Szigeti sent Sonic Seizure at the Pilgrim. It seemed that could swing the game entirely in his favor, but Kibler had Prismatic Strands. The next turn saw Szigeti take the Strands with Gravegouger. Kibler bounced back with Cabal Torturer, which threatened to kill the annoying Slithery Stalker, but was burned away with Thermal Blast before it became active. Pulsemage Advocate reanimated the Torturer, It came back out, as Kibler proclaimed, "I want my stuff back! Gimme!" It killed the Stalker, which brought back Aven Flock, but one of the cards the Pulsemage Advocate returned was Morgue Theft. It was cast, and the Stalker came right back out.

Arcane Teachings made Gravegouger a monster, and it shot the Torturer. Pilgrim of Virtue was sacrificed in response to keep it alive for the time being. This let his Torturer kill the Stalker, bringing back the Flock, which attacked for the final two points of damage.

Play was slow for the first few turns until Kibler tapped all his mana on turn four. "You don't want to know what it is." It was the Dirty Wererat that gave Szigeti so much trouble the first game. This time, Szigeti had Fiery Temper to deal with it. At this point in the game, Szigeti had only mountains, and Kibler had only swamps. 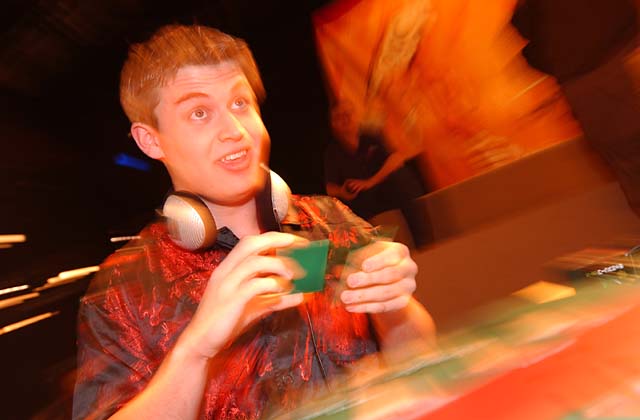 Kibler played some solid board control creatures in Cabal Torturer and Hallowed Healer, and went to the air with Soul Scourge. Szigeti had a Gravegouger, and Thermal Blasted the Healer. Shade's Form made the Scourge into a huge threat, but Szigeti played Faceless Butcher to take care of it. Chastise killed the Gravegouger, and Szigeti cast Gloomdrifter. Cabal Torturer killed Faceless Butcher with a little help from Crippling Fatigue, and Lava Dart was used twice to burn away Soul Scourge. Following up, Gravegouger took away Kibler's Crippling Fatigue and Dirty Wererat. Morgue Theft brought back Faceless Butcher, and Kibler used Waste Away on end step to kill the Gravegouger and get Crippling Fatigue back in his graveyard. Ember Shot destroyed Cabal Torturer, and Kibler summoned Aven Flock onto the otherwise empty battlefield. Szigeti cast the Butcher he had been holding, and then cast Frightcrawler. Carrion Wurm provided a huge barrier to keep Szigeti from attacking. However, Szigeti enchanted his Frightcrawler with Arcane Teachings, and attacked. Kibler called his bluff and blocked, so Szigeti removed three cards from his graveyard to save Frightcrawler.

A Painbringer later meant bad news for Szigeti. Prismatic Strands would have let it live for a turn to kill the Frightcrawler, but Szigeti had Flaring Pain. A second Gravegouger took away Prismatic Strands and Crippling Fatigue. Kibler locked up the board with Angelic Wall and Pilgrim of Justice, and then played Shade's Form on Carrion Wurm. Slithery Stalker removed the Wall, but Szigeti still could not attack. However, his Frightcrawler could shoot Kibler each turn thanks to Arcane Teachings. The Wurm attacked, Szigeti removed three cards from his graveyard, and did not block. Szigeti then decided to go for it, and attacked with all his creatures. Pilgrim of Virtue blocked the Bully, and Prismatic Strands was nullified by Flaring Pain. Szigeti's creatures busted through for massive damage, and Lava Dart finished the job.

Szigeti missed his third land drop, and Hallowed Healer died to Lava Dart. Barbarian Bully hit play, Kibler cast Aven Flock, and Szigeti made a Gloomdrifter. Kibler played Soul Scourge and Szigeti's Faceless Butcher removed the Flock, clearing the way for an assault. Prismatic Strands slowed things down a bit, leaving Kibler's Soul Scourge against Szigeti's Butcher, Gloomdrifter and Barbarian Bully. Szigeti swung with all his creatures, Waste Away killed the Butcher, and the Flock made a return appearance, but was killed with Toxic Stench and Ghastly Demise before blockers were declared. Prismatic Strands was flashed back in response to prevent some of the damage. Kibler untapped and put Shade's Form on his Scourge, putting the game in race mode. Pulsemate Advocate was summoned, and Painbringer followed to make Kibler's board even better. On the next turn, Painbringer killed the Gloomdrifter and the pumpable Scourge attacked for the win.