Round 10: Phoenix Foundation vs. Hobby One 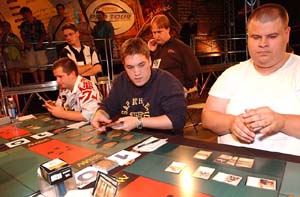 Phoenix Foundation has been playing in a single elimination tournament since the fifth round of day one. After starting out 2-2-0, Kai, Marco, and Dirk have torn off five straight matches to give themselves a chance at defending their title as the Team Pro Tour Champions.

Hobby One—formerly know as Black Ops—might have a thing or two to say about whether or not they get that chance. Florent Jeudon, Antoine Ruel, and Olivier Ruel have a Grand Prix victory and a Pro Tour top 6 in this format.

It comes down to six of the game's top players, two teams and room for one of them to have a chance to fight again for a shot a day three.

The last time I covered one of Kai's matches he was playing with such platinum hits as double Zombie assassin and Face of Fear. I was looking forward to seeing what he could pull out of his bag of trick against a French team that is well known for its unorthodox approach to deck building.

Kai did not disappoint with a first turn Thought Nibbler. Antoine seemed shocked to see the card and actually had to double check what the limitations it put on Kai's hand size (Answer: if you are playing first and put him out on the first turn you are right at your new legal limit of five cards). Antoine showed the card to Florent who could only shrug and gesture at Dirk's Bloodcurdler that he was preparing to examine more closely.

Kai drew first blood with his Nibbler and played a Seton's Scout. Antoine kept pace with a Werebear and the two creatures traded during Kai's next attack step. Kai played a Hydromorph Guardian. Antoine kept up play for play and added a Leaf Dancer.

Kai kept swinging with both of his guys but Antoine was not willing to trade for his forest walker. Diligent Farmhand hit the table this turn as well. Antoine played his own Seton's Scout this turn and was able to crack with the thinly veiled Cat People.

Kai just kept swinging his men into the red zone and the Guardian and the Scout traded. Kai played Aven Wind reader and sent the turn back to Antoine who made his own Windreader during the bottom half of the turn.

Kai was undeterred and attacked with everybody. Antoine proposed a trade with the 3/3 fliers but Kai found some Sudden Strength and the Frenchman fell to 11. Antoine played Grizzly fate one card shy of threshold and put two Bears into play.

Kai swung into the red zone and played a Standstill. Kyle had to break it but he scooped when Kai flashed him Twigwalker. 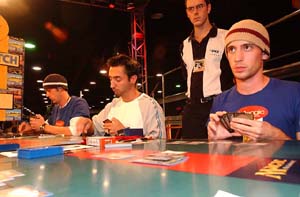 I looked over to see what was happening in Marco and Olivier's match. Marco had a Savage Firecat in play with Benevolent Bodyguard for back up. If Olivier somehow managed to deal with both of those cards, Marco was holding enough burn to kill his opponent.

Antoine won his second game against Kai and Marco cruised to his second win against Olivier. Dirk also won his first game during this time.

Antoine made a Chatter toke during the bottom half of the first turn. Kai summoned a Seton Scout. Antoine used his second turn to Rites of Spring for four cards and madnessing a Rootwalla into play. The only card in his hand that was not a land at the end of turn was a leaf Dancer.

Despite playing a turn four Possessed Aven, Kai was not able to keep up with –my favorite!—Grizzly fate with Threshold and flashing it back Suddenly the game rested on Dirk's shoulders.

Game 3 did not get started until turn three when Dirk cast Last Rites for three cards 'mind twisting' away everything but one card—a Caustic Tar—and some lands.

Florent ramped right up to six lands but could not keep up with a never ending stream of gray ogres from Dirk's side of the table.