Round 10: Raphael Levy vs. Jean-Louis D'Hondt 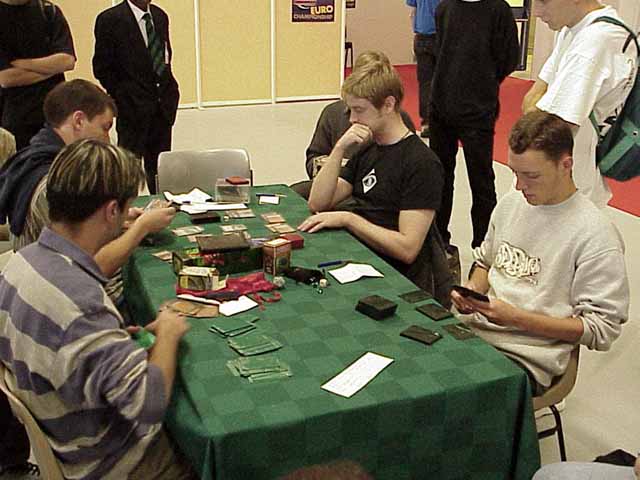 Raphael Levy and Jean-Louis D'Hondt sat down for round ten with 8-1 records. Each had lost to Noah Boeken, and only to Noah Boeken (who had yet to lose to anyone). The winner of this match should be able to draw in to the Top 8. The match was surprisingly friendly, with both players teasing each other constantly in French. Levy is running Replenish while D'Hondt is playing a Control Black variant with Mishra's Helix, Phyrexian Processor, and significant artifact mana.

D'Hondt used Dark Ritual to play Mishra's Helix on turn four with Peat Bog untapped. Levy was able to play Attunement on his next turn anyway thanks to a Sky Diamond. Levy had practice using his Frantic Searches to get around Mishra's Helix (and Tangle Wire) last round versus Ben Ronaldson's Wildfire deck. Levy used Frantic Search on his fifth turn, dumped 4 things that say "Parallax" on them into the graveyard along with an Opalescence, and then cast Replenish. D'Hondt concedes.

D'Hondt mulliganed once before game 2, but his new hand contained both Dark Ritual and Phyrexian Negator. One Rishadan Port was all it took to pin Levy down enough to hit him five times with the Negator.

Levy kept a five land hand with Sky Diamond and Seal of Removal. D'Hondt Duressed away the Diamond and then a Port war ensued for several turns. D'Hondt whiffed on a turn 4 Unmask since Levy still had nothing but land in his hand. On his next turn D'Hondt went for Mishra's Helix and Levy, laughing, threw a Counterspell at him that he had just drawn off the top of his deck. Nice top-deck Levy then drew Parallax Tide and phased out all of D'Hondt's swamps. When Levy next drew Attunement, the game was really looking up. D'Hondt played a swamp and a Negator, but that wasn't nearly enough offense. Levy just Sealed the Negator back into his hand, Attuned, and cast a small Replenish. Levy was in position to win the game a few turns later so D'Hondt went for Masticore with his Vampiric Tutor. Levy flipped over a Parallax Wave that he was holding in his hand and D'Hondt extended his hand, conceding.