Round 10: Reiji Ando vs. Toshiki Tsukamoto 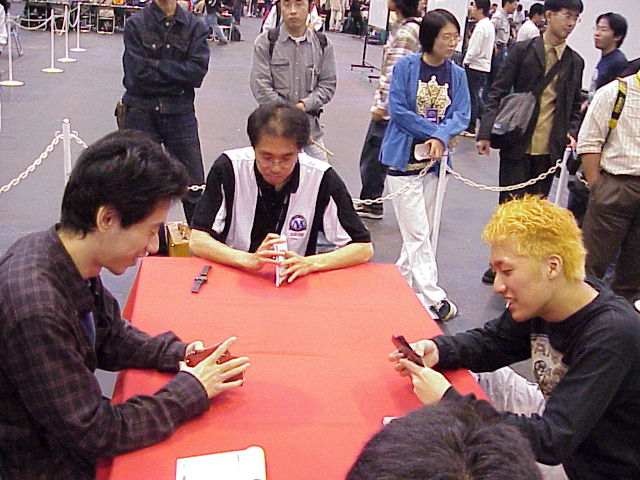 Veteran Toshiki Tsukamoto is perhaps known more for his pace of play than for his accomplishments, but that does him a disservice. He is, after all, one of the founding fathers of Japanese professional Magic. Two-time National Champion, winner of Grand Prix - Manila, and invitationalist, this graybeard's resume is impressive. This round he squares off against Reiji Ando, one of Tokyo's best. Though he doesn't have a title of his own, his consistent strong finishes (including Top 8 at Nationals and APACs in 1998) have made him a known commodity.

Ando had to mulligan in game one, going second. Tsukamoto led with Mystic Visionary, and Ando decided to match him with Thought Eater, discarding Ghastly Demise. Hallowed Healer came to Tsukamoto's aid, and Ando decided to race two against two with Foul Imp. He tried to cement things with Repel, but Tsuakmoto was ready with Syncopate.

Tsukamoto continued to build his advantage, regrowing his Syncopate with Scrivner. However, Ando had a second Repel for the Healer, and pulled ahead in the race. He too had the power of the Scrivner, and got back his Ghastly Demise.

Now Tsukamoto was in a bind. He needed to answer Ando's fliers, but couldn't protect his investment with Syncopate. He played his sixth land and Hallowed Healer, then Kirtar's Desire to stop the Thought Eater. Ando answered with a second Eater. Tsukamoto's pace turned glacial as he sought a way out. He swung with his Visionary, and Ando let it through.

The two were even at eight life apiece. Tsukamoto worked out all the angles, and settled on playing Mystic Zealot over Balshan Griffin. Ando knocked him to four and played Patchwork Gnomes. Tsukamoto's twin Syncopates were doing him no good, as he needed to tap out to stay alive. With no other play to stay in the game, he dropped the Griffin. 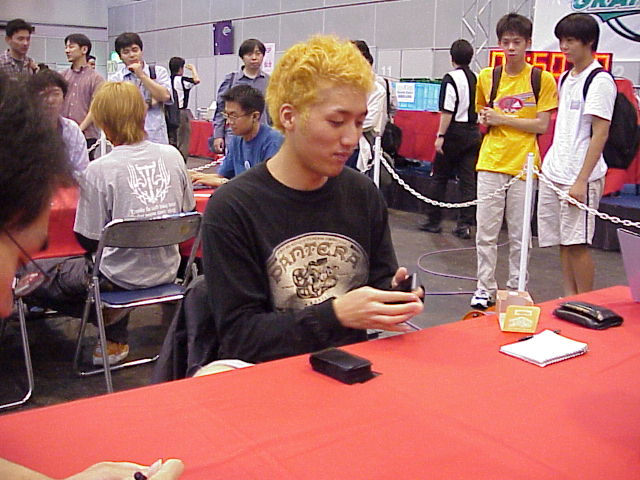 Ando looked at his one untapped mana, checked the board, then dropped Painbringer. Unanswered, it would remove Tsukamoto's one flying blocker and Ando's fliers would finish him. Tsukamoto insisted on making sure before scooping his cards.

In game two, Tsukamoto opened with Mystic Visionary. Ando answered with Frightcrawler, and when Tsukamoto couldn't find a swamp to power Afflict, he ran his creature into it and added Angelic Wall to his team.

Ando, however, couldn't find a third land, letting Tsukamoto drop Cephalid Retainer and Balshan Griffin to bring the beats. Ando found a third land, but was in dire straits. Tsukamoto brought out Patrol Hound, then knocked Ando to eight, the Retainer making way. Ando steadied himself with Patchwork Gnomes and Repel on the Retainer, but the Griffin brought him to five. Aether Burst only delayed the inevitable.

Tsukamoto kept a land-heavy hand for the deciding game three. When he found more land waiting at the top of his deck, it seemed to spell doom. However, things turned around when Ando played Frightcrawler. Tsukamoto's deck kindly gave him Afflict.

Now he started to draw action. He answered Ando's Thought Eater with Aven Fisher. Ando's Aether Burst bought time, and he brought it back with Scrivner. Tsukamoto replayed his Fisher and added a Healer to the mix. Ando swung and played Aven Windreader. 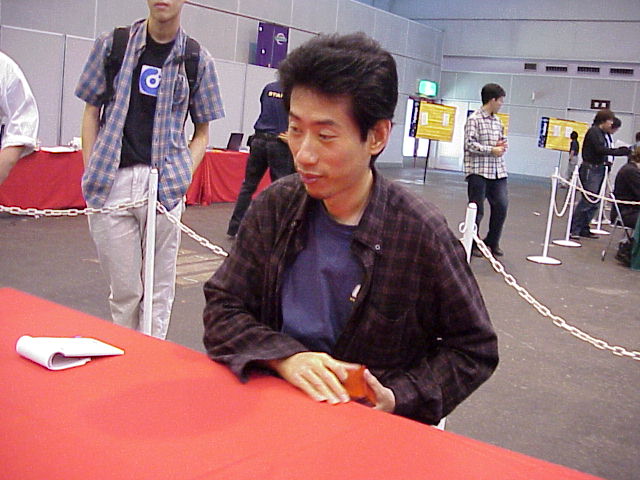 However, now Tsukamoto's Healer was active. Balshan Griffin further solidified his defences. Ando trumped with Screams of the Damned. Tsukamoto played Cephalid Broker while Ando bade his time, waiting to dispatch the Healer. It failed to turn up an answer.

Ando's creatures swarmed the breach. Tsukamoto blocked both Scrivners, but the Screams left him with no board and just four life. At this point time ran out, but because of the Screams the finish was academic.