Round 10: Ryan Fuller vs. Brian Lynch 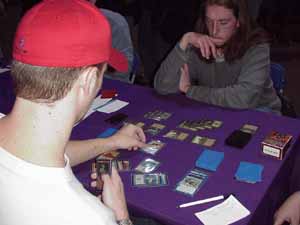 Out of the game for a year thanks to his suspension for various infractions, Ryan Fuller is back and playing with the same talent and confidence that earned him a Masters title. He breezed into Day 2 and has drafted himself a solid red-blue deck despite the absence of Lavamancer's Skill. His opponent, local pro staple Brian Lynch is both less famous and less infamous. He’s been to a dozen or so Tours, and has a Top 20 under his belt to show he’s no slouch. His is a black-green machine that keys off elves, but lacks Dirge of Dread.

Lynch curved out beautifully in the first game, with Elvish Warrior, Gempalm Strider and Symbiotic Elf. Fuller had just a morph to trade with the Strider, and then Acending Aven to take to the air. However, the remainder of his hand was lands. They traded damage, with Fuller falling farther and farther behind.

A Wellwisher from Lynch exaggerated the problem. Fuller found a morph, Willbender in fact, to trump what turned out to be Lynch’s Patron of the Wild, but Nantuko Husk was right on his heels, and after failing to draw a fourth spell, Fuller packed it up for game two.

A mulligan from Lynch earned Fuller’s trademark smirk. His six were better, and they were off. Riptide Mangler stared at Elvish Warrior, and then both players made morphs. Lynch’s turned sideways, blocked by the Mangler. He revealed Branchsnap Lorian for the trade, as Fuller had mana open. 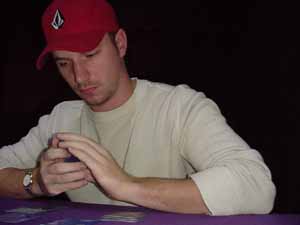 Both players rebuilt. Soon it was Fuller’s two morphs versus Lynch’s army of Warrior, Husk, Wellwisher and morph. Lynch left the Wellwisher at home and sent the rest. He had five mana open. Fuller had six. The morphs tag-teamed the Husk. Damage was stacked. Fuller flipped over Weaver of Lies. Lynch, Patron of the Wild to save his Husk. Fuller fell to eleven.

Fuller played Screaming Seahawk, fetching another that would have been his next draw. He couldn’t resist a “How lucky” at the irony. Crown of Fury suited up his morph. Lynch went one better, with Symbiotic Elf for his Husk. Fuller traded his Seahawk for the spent Patron of the Wild. He made a morph and Embermage Goblin and passed it back. The Weaver stopped the Husk, costing Lynch his Wellwisher and Symbiotic Elf, but Lynch’s morph go through, and was Treespring Lorian. Fuller stood at six.

Lynch’s next attack did not go so well. He bashed in with all his men. Fuller unmorphed the Crowned creature to show a Skittish Valesk. His other morph blocked the Husk, and after damage was stacked, used his remaining mana to reveal Wall of Deceit. Lynch did get through for three, but he was now on the defensive.

Fuller took the opportunity to summon a second Riptide Mangler, inheriting the Valesk’s six power, then got Mistform Wall and Screaming Seahawk. He swung with only his flier, and not for long. Spitting Gourna blocked that avenue. Lynch got a Symbiotic Elf that helped the Husk dispatch the Valesk, and then the works really got gummed up. Embermage Goblin brought Lynch to eleven as he amassed troops. Fuller played morph after morph. They traded creatures, but Fuller had the advantage. Voidmage Apprentice shut down Krosan Tusker. Pinpoint Avalanche took care of the Gourna. With time running out, Lynch decided to take a chance on game three. 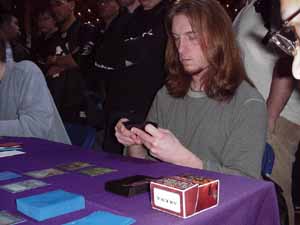 The two shuffled like lightning, with just five minutes left to play. Lynch again had to mulligan. Lynch started with Wirewood Elf, but then hit for damage and made no play on his third turn. Fuller had a morph. Lynch baited with the Elf, but fuller didn’t block. He followed up with Gempalm Strider.

Fuller attacked with his morph and Lynch blocked, trading with the hidden Willbender. Fuller had no shortage of action. He had Ascending Avens on turns four and five. Lynch had just Berserk Murlodont and a morph. He was at eleven when he found Spitting Gourna. Fuller showed him Pinpoint Avalanche. Lynch drew his next card, and extended the hand.