Round 10: Scott Richards vs. Tim He 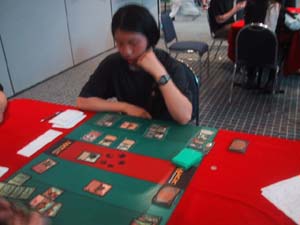 Both players had 1-1 records in this pod coming into this match, the loser on theis match having a considerably more daunting task ahead of them. The winner would still have much to do but a 1-2 draft can be momentum destroying.

Tim wins the toss and play first, but Scott goes on the offensive with a Goblin Taskmaster. Tim's 3rd turn regulation morph drop doesn't block the Goblin, and Scott replied in turn with a face down creature of his own. The rule of thumb is not to block morph creatures, as you can often lose your blocker to a first striker, but that proved costly as Tim morphed in his Goblin Commando.

A Fallen Cleric hit Scott once before being traded with a Symbiotic Elf as Scott started collecting small 1/1 tokens. Scott was put on a clock with an unblockable Severed Legion being played. With both players not missing a land drop in turns, spells were at a premium, and an Aggravated Assault seemed out of place. The next turn a Symbiotic Beast came off the top and took down a Battering Craghorn and a morphed creature, leaving Scott with 6 1/1 tokens against a Severed Legion. With Scott on 3 life after a Legion attack, Tim Misery Charmed the Fallen Cleric back – an interesting choice with Scott on such low life. With Solar Blasts ready, Scott was able to remove the Cleric for a second time and then the legion a turn later leaving him on 1 life. Tim unfortunately could draw nothing but land in the subsequent turns allowing Scott to get the win by the smallest of margins. 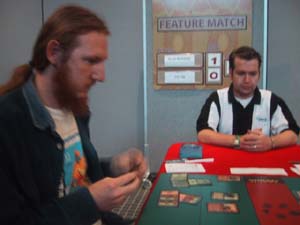 Richards – In, Spurned Wolverine. Out, Words of Wilding.
He – No changes.

Again both players drew enough land to be considered real estate, Scott pushing early with a Birchlore Ranger. Tim's Legion blocked the ranger third turn and was removed with a Solar Blast. Scott's Symbiotic Elf was caught with a morphed in Battering Craghorn, Tim was unable to push for any attack with Scott playing true to his curve with a Barkhide Mauler. The mauler was double blocked, by the Craghorn and the Fallen Cleric, trading 2 for 2 with the assistance of a Goblin Sledder.

Scott was then able to drop the Spurned Wolverine and a Krosan Tusker, following it with an Aggravated Assault. An interesting combo, which gave him a 6/5 first striker which a mana flooded Tim couldn't deal with.