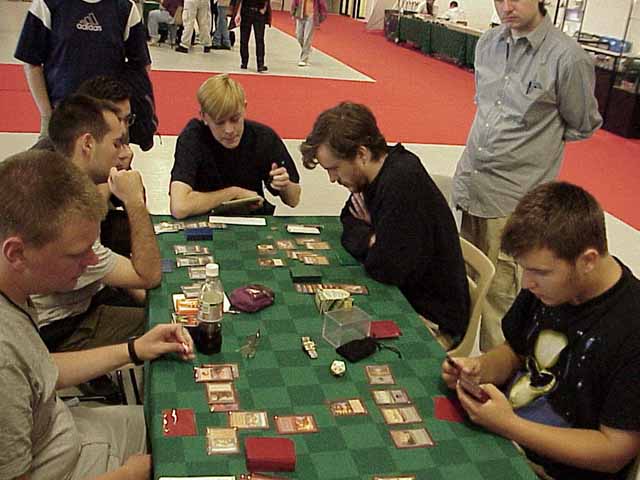 Pro Tour-New York winner Sigurd Eskeland is doing fairly well in this tournament. He is probably out of mathematical contention for the top 8, but doing well in the last few rounds will certainly give him a top 16 finish. This round he is facing Jan Tomcani from Slovakia. Tomcani is playing a Control Black version very similar to the original designed by Mike Flores. Eskeland is playing a copy of Red Deck Wins 2000 with maindeck Pillages.

Tomcani was forced to mulligan in the first game, and Eskeland certainly had the draw to punish him for it. Eskeland cast Goblin Cadets and Goblin Patrol, which kept attacking until Tomcani got up to four mana in order to cast Massacre. Eskeland played carefully enough and kept another Patrol in his hand, which he cast after the Massacre.

Tomcani was ready for that one too, dropping a Masticore and taking out the Goblin. Using his Rishadan Ports, Eskeland was eventually able to catch the Masticore while its controller was tapped out and kill it. He went on to unload a barrage of burn spells at Tomcani. Down to a handful of life points, Tomcani drew and cast Vampiric Tutor, getting� a Phyrexian Negator! Not bothering with the Negator, Eskeland used more burn to win the game. Later on Tomcani explained that, even though Negator is a horrible card for this matchup, he had virtually no chance to win that game and needed to take big risks to have any chance at all.

In the second game Tomcani had clear advantage early on. He used discard (including Persecute) to get rid of Eskeland's hand. He then dropped a Masticore, but Eskeland drew a timely Pillage.

Eskeland tried to win via Hammer recursion, but Tomcani cast a Rapid Decay in response to the Norwegian trying to return the Hammer back into his hand. Eskeland drew two more Hammers however and kept lowering Tomcani's life total, slowly but surely.

Tomcani was able to slow down, but not prevent the inevitable. Eventually his mono-black deck fell to Eskeland's direct damage.