Round 10: Silence in the Arena

Shuhei Nakamura, reigning Player of the Year, comes into this round at a respectable 8-2, but needs to keep the dream alive by smashing through powerful Limited player and Englishman Matteo Orsini-Jones. Nakamura has a five-color concoction with a fair number of domain cards, whereas Orsini-Jones has a very aggressive black-red deck.

The two players were extremely calm and collected as they prepared to do battle, shuffling up in complete silence. 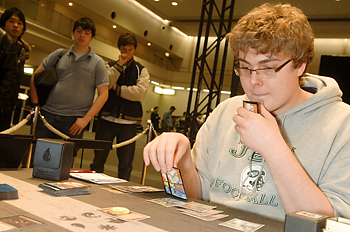 Nakamura kept, and led with three mountains, not a good sign for his multicolor deck, while Orsini-Jones spent his early turns fixing his mana with a Grixis Panorama. Orsini-Jones’s Hissing Iguanar was the first creature to hit play, and all Nakamura could do was pass without a land. The Iguanar bashed in to the red zone, bringing Nakamura to 17 and then 14 as Nakamura was forced to discard his Nacatl Outlander, and then Vein Drinker, as the land refused to arrive.

Scourge Devil accelerated the clock to strike 10, and Nakamura, unable to cast his spells, could only scoop on the next turn when no fourth land or second color was forthcoming.

Nakamura led with a Forest this time, and the Jund Panorama that followed helped ensure he wouldn’t be encountering the same virtual lockdown due to mana screw again. Matca Rioters hit play for the Japanese pro as a 3/3 on turn three, but Orsini-Jones cycled into Wretched Banquet to deal with the lone Rioters.

Nakamura, unfazed, tapped out again to play Fleshformer, passing with no fourth land, but quickly remedied that with a second Swamp into Bant Obelisk. He swung Orsini-Jones down to 18 since the Englishman was unwilling to block the incoming Fleshformer with his newly-made Rockslide Elemental. The first red Elemental was joined by a second, of the Hellspark variety, and both bashed in to take Nakamura to 16.

Nakamura untapped, laid a Mountain to reach the full five colors for his -2/-2 on a stick, and followed it with the Vein Drinker he had been forced to discard in the first game. The board did not look good for Orsini-Jones, but he kept his cool, swinging in with the now 2/2 first striking Elemental. Nakamura declined to block and went to 14, but did not hesitate to swing in again with the Fleshformer, evening up the life totals at 14 apiece.

Orsini-Jones was up to seven lands but had only a Rockslide Elemental to his name: not ideal for a beatdown deck. He swung in again past the active Vein Drinker, taking Nakamura down to 12. He followed up with a Blister Beetle, shrinking the Vein Drinker to 3/3 before attempting Skeletonize. Nakamura held up a hand and responded with an activation that took the Rockslide Elemental along with his dying Drinker.

Nakamura had a replacement monster, however, in Charnelhoard Wurm. Orsini-Jones looked at Nakamura’s hand of four cards, and made his move to match the Wurm with his own double-devouring Tar Fiend, a massive 8/8. When Orsini-Jones declined the block the incoming Wurm, Nakamura used a -4/-4 Drag Down from his hand before the Wurm’s recursion damage trigger went on the stack, then replayed it to kill the 8/8.

Orsini-Jones combined Infest and Bloodpyre Elemental to sweep the board of Wurms and Formers alike, but Nakamura quickly rebuilt his army with a Rhox Charger and Rakeclaw Gargantuan. Orsini-Jones only had Viscera Dragger, and it alone couldn’t complete with the exalted, first-striking combination. He quickly dropped to 0. 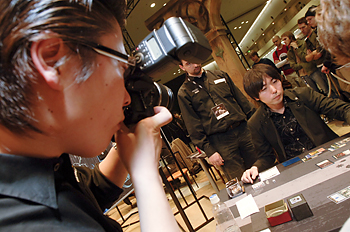 Orsini-Jones got to start off the third and final game, but inauspiciously, as he was forced to mulligan. Orsini-Jones tried to improve his hand’s quality using two cyclers, and found himself a Shambling Remains. It turned out his six appeared to be doing much better than Nakamura’s seven, as the Player of the Year again could not find land. He found a third land two turns later, but it turned out two turns of silence from the opposing mage is all Orsini-Jones’s team needed.

Matteo dropped a Hissing Iguanar and Hellspark Elemental, his next attack dropping Shuhei from 16 to 6 and then 5 when the Elemental expired with a hiss. Shuhei could only pass the turn with four mana up. When Matteo unearthed his Hellspark for another go, Shuhei extended the hand.

“I kept a one-land hand, with two cyclers,” explained Orsini-Jones, the silence of the match broken, as Nakamura just shook his head. “I didn’t want to go to five.”

“It’s such a good feeling when your opponent is reigning Player of the Year and he goes, turn three discard,” Orsini-Jones added, clearly sympathetic with Nakamura’s mana-screw plight during the match but unwilling to look a gift horse in the mouth.

Orsini-Jones left the Arena triumphant, undefeated in Limited at this Pro Tour.