Round 10: Slivers against Families

oloradoans Shaun and Brett Piazza form one of four brother/brother family teams that entered the event, and they're the most successful so far at 7-2. Brett first tried his PTQ luck with a different partner, but found a lack of collaboration aggravating. Sometimes it's best to keep it all in the family. For this game, Brett brought white-green while Shaun wields black-red. 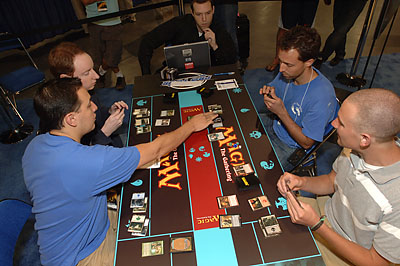 Fiorillo opened with Two-Headed Giant all-star Essence Warden, which the Piazzas answered with Magus of the Scroll, Knight of Sursi, and Sudden Shock for the Warden.

Harvey followed up with Spinneret Sliver, Poultice Sliver, and Quilled Sliver, but the Piazzas halted the Slivers' assault with Dunerider Outlaw and Nessian Courser.

Both sides built up their armies until the Piazzas had Magus of the Scroll, Dunerider Outlaw, Knight of Sursi, Grinning Ignus, Phyrexian Totem, and a mystery morph. The Sliver players had been building their mana bases but still controlled just Spinneret Sliver, Poultice Sliver, and Quilled Sliver, and they were starting seriously to fall behind.

On turn six, the Slivers turned the tables. Fiorillo introduced the unpredictable Firewake Sliver, then Harvey dropped a nuclear Might Sliver, which added 12 hasty power to the board with a single card. Might, Poultice, Quilled, and Spinneret Sliver all charged in with 15 power total, while hasty Firewake stood back with mana up to regenerate something as necessary. Dunerider Outlaw blocked Spinneret, and Grinning Ignus and Knight of Sursi blocked Poultice Sliver. The Poultice Sliver took down both its opponents, and Fiorillo regenerated the Poultice Sliver by tapping the Firewake Sliver and 2 mana. The Slivers forced 7 damage through, and it briefly looked like the Piazzas had thrown away two creatures for no benefit, putting themselves even further under the gun of the sudden Sliver turnaround. Piazzas 19 - Harvey/Fiorillo 32.

With Cradle to Grave leaving Shaun Piazza's hand, his turn-one Magus of the Scroll suddenly got dangerously close to active. Shaun played out a Hammerheim Deadeye targeting nothing, then still had enough mana to activate Magus with one card in hand, targeting Poultice Sliver in the remaining window of the regeneration shields being down. Harvey and Fiorillo understood the value of Poultice Sliver in protracted combats, and they sacrificed Quilled Sliver through Firewake Sliver to save the Poultice Sliver. Needless to say, there were more than a few on-board tricks. 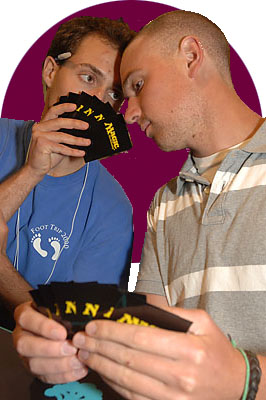 The Piazzas put their heads together.

Through some patient plays, the Piazzas had successfully defused the atomic bomb known as Might Sliver. Killing just a couple of Slivers can drastically reduce the capabilities of the Sliver armada, and they had done exactly that by making sacrifices in combat and saving their removal for the latest possible time. The Piazzas alpha struck back through the tapped Sliver army, dealing 9 damage and taking it back to a score of Piazzas 19 - 23 Harvey/Fiorillo.

They felt confident making such an aggressive attack because Brett Piazza followed it up with Calciderm, about as solid and reliable a blocker as you could wish for.

Incredibly, Fiorillo swung the momentum back again by playing a creature that could actually attack into Calciderm: a hasty Battering Sliver, backed by possible pumps from Firewake. Battering Sliver headed in there, indeed got blocked by the 'derm, and ate a sacrificed Spinneret through Firewake Sliver to defeat the Calciderm and trample over for 1.

To take stock, the remaining Slivers were Battering Sliver, Firewake Sliver, and Poultice Sliver. Team Piazza included Dunerider Outlaw, Magus of the Scroll, mystery morph and Phyrexian Totem. It stood at 19-23, balanced on the edge of a knife.

The Piazzas added Llanowar Empath, finding Castle Raptors. Another Hammerheim Deadeye came out, and the morph and 2/2 Outlaw attacked. In a swarm of activated abilities, Poultice Sliver blocked the morph, stacked damage, regenerated itself, got shocked in response by Magus of the Scroll, then got saved by Eugene's timely Momentary Blink. Perhaps Magus should have shocked Poultice before combat, just to get it tapped so that the Morph and Outlaw could attack.

Keeping the haste pressure on, Harvey produced Reflex Sliver while Fiorillo made another Firewake Sliver. In a fit of creepy déjà vu, the Sliver players sent in all their monsters except for a hasty Firewake Sliver staying back to use Poultice Sliver's ability.

Undeterred, the Piazzas sent more brave men to the front line, summoning Rathi Trapper and a new Nessian Courser. Knight of Sursi nipped in for 2 damage, and the life totals hit 11-20 in a close game. 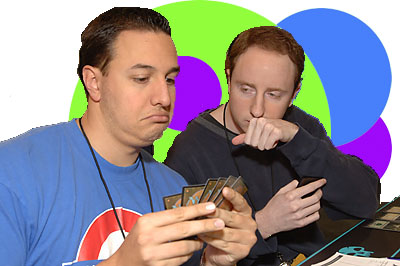 Harvey and Fiorillo's Slivers are too fast and, in the end, too furious.

On turn nine, Harvey and Fiorillo found more Slivers to play, and this time it was Spinneret and Reflex Slivers for Harvey and Fury Sliver for Fiorillo. Hey wait a minute, Fury Sliver for Fiorillo?? With that incredible topdeck and the Piazzas largely tapped out, the entire Sliver army charged forward en masse, using double strike to inflict 30 points of hasty trample damage, clearly more than the Piazzas' army's combined toughness and their life total put together. gg.

Yup, against a mass of slivers it really can happen that quickly. One power pumper like Might, Sinew, Bonesplitter, Sedge, Fury, or even Virulent Sliver can end the game just as fast as that, especially where haste or trample is involved. In this case, double strike, haste, and trample combined to make the horde especially deadly.