The tenth round brought together two titans: Yuuya Watanabe, current Pro Player of the Year with a whopping six Grand Prix Top 8s last year, and Luis Scott-Vargas, three-time Pro Tour Top 8 player and recent 17-0 streak-holder at Pro Tour–San Diego. The two sat down in the feature match arena to an already-gathering crowd. 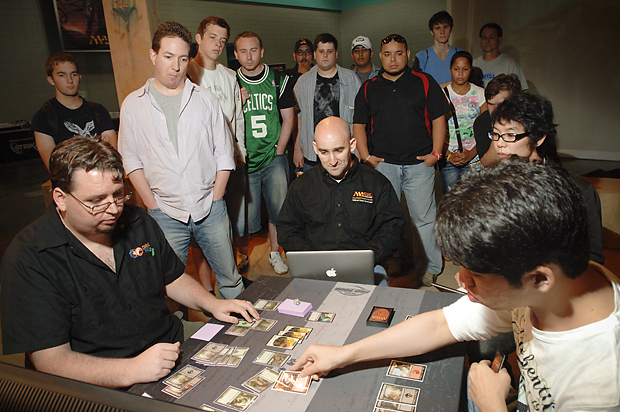 Luis Scott-Vargas and Yuuya Watanabe draw a crowd—but who to cheer for?

"Who am I supposed to cheer for?" asked a member of the crowd. He pointed at Watanabe. "I know LSV—but this guy is probably a master!"

"You know he Top 8ed like six Grand Prix and/or Pro Tours in a row last year," Scott-Vargas replied. "Right?"

Watanabe led with Swamps to Scott-Vargas's Forests, and eventually put down an Arrogant Bloodlord to an empty board. Scott-Vargas had the answer though, in Growth Spasm for a Swamp of his own. His Eldrazi Spawn token was the perfect foil to the Bloodlord.

Indeed, Watanabe merely played a Mountain and passed. Scott-Vargas continued to produce Spawn at an alarming rate, this time with a Kozilek's Predator and then some non-Spawn acceleration with Ondu Giant. Watanabe still had no plays on five lands, but had a Hellcarver Demon on six. 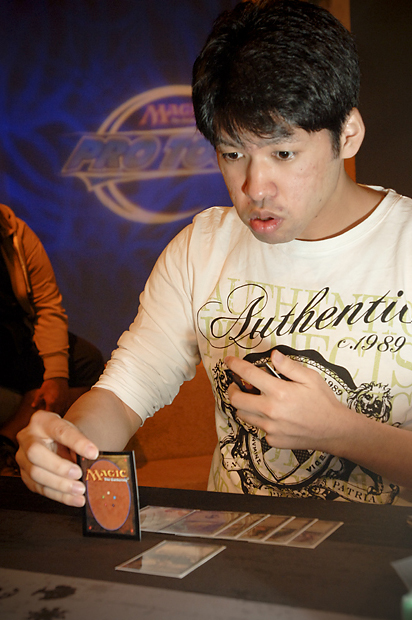 Scott-Vargas dropped one of his deck's three (!) Pelakka Wurms, bringing the pristine life totals to 27-20. The massive 7/7 meant Watanabe could not attack with his Demon or he would die. Scott-Vargas put the screws in with a Consuming Vapors, taking out the Arrogant Bloodlord. When the Wurm attacked, Watanabe blocked with his Demon rather than lose it to Consuming Vapors, and then used Staggershock to finish it off. His rebounded Staggershock hit a Spawn token, but he was surprised when he cast Perish the Thought and saw a second copy of the Big Palookas. He had Scott-Vargas shuffle that in but also saw Consume the Meek.

When Scott-Vargas reinforced his already impressive board with a Wildheart Invoker, Watanabe looked at his empty battlefield, drew once more, and conceded.

"I think I draw," said Yuuya, after sideboarding and shuffling.

Scott-Vargas looked to take the game away with a turn two Overgrown Battlement, but his acceleration didn't stop there—he cast Awakening Zone next. Watanabe could only sit and watch with no plays as Scott-Vargas continued to Spawn with a Growth Spasm. He added a Bramblesnap the next turn.

Watanabe tried to get some action going with a Battle-Rattle Shaman, capable of scooting past the Wall, but Scott-Vargas upgraded with Sporecap Spider. When Watanabe cast his formidable Magmaw to try to control the board, Scott-Vargas was ready with a Flame Slash. Bramblesnap started to make Spawn-powered chunks out of Watanabe—first 4, then 5 damage. When Pelakka Wurm #1 hit, the life totals stood at 27-11 in Scott-Vargas's overwhelming favor. 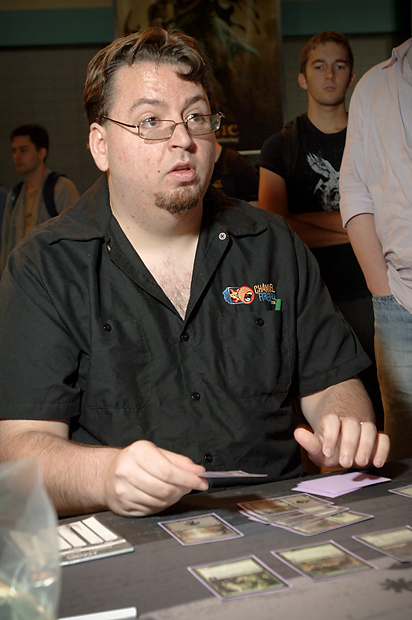 'Sometimes, I even amaze myself.'

A Rapacious One from the Japanese player did not seem like it could tangle with the Wurm, but it swung in valiantly regardless. The American thought for a moment, then double-blocked with his Battlement and his Spider—more than enough toughness to stop the now 7/4 trample from producing any Spawn on the Japanese side of the field. Scott-Vargas could not keep his total monopoly on Spawn, however, and Watanabe put the life totals at 24-14 with an Essence Feed.

Luis rumbled in with Bramblesnap and Pelakka Wurm, leaving back his now four Spawn and one Battlement. Yuuya, calm and collected, opted to take the 10 resulting damage, including another two tapped Spawn, putting it at 24-4.

Watanabe untapped, then sacrificed his three Spawn and tapped all seven of his lands.

Yuuya nodded and dropped the Butcher of Truth onto the battlefield. He drew four cards and passed.

Unfortunately for the Player of the Year and his 12/12 minion, Scott-Vargas had mana up for Induce Despair—and with a revealed Jaddi Lifestrider capable of taking down the Rapacious One, and enough Spawn to threaten lethal from both his Bramblesnap and his Wurm, Watanabe scooped.