Round 10: Standing on the Precipice: Mike Thompson vs. Neil Reeves 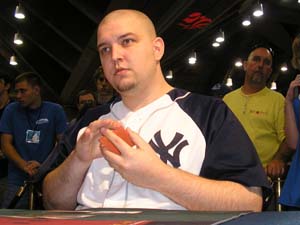 Reeves has done this a few times before, including last year. He's familiar with sitting at or near the top of the U.S. Nationals field, in spite of the fact that his occupation of professional card player doesn't leave him with as much time to sling spells as it once did.

Sitting across the table (and also with only one loss thus far on the weekend) is Mike Thompson, a Pacific Northwest pro who has been a consistent performer at Pro Tours and Grand Prix, but who has never broken through with a big finish. After a 6-1 Day One, I told Mike that it was now time for him to have a really good Day Two as well, and he hasn't disappointed yet, going 2-0 thus far in a very tough pod 1.

Thompson was forced to mulligan his opener, complaining that the second set wasn't any better. Neil only needed to look at the first three cards in his stack before choosing to keep his.

Child of Thorns and Akki Underling for Reeves squared off against Thompson's Hand of Cruelty and Frostling on turn two, as both players jockeyed for position. Reeves cast Gnarled Mass on his third turn and Thompson used his Frostling to get rid of the Child, making sure Reeves wouldn't be able to use it to gain an advantage in combat. 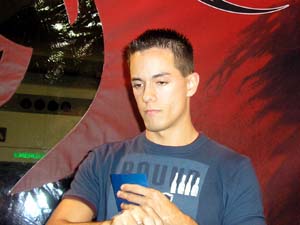 Mike Thompson is looking for a breakthrough performance.

Turn four was where the separation began, as Thompson stalled while Reeves kept laying various weenies that sat back on defense while Gnarled Mass kept swinging past the Hand. A Kami of the Hunt and Soratami Cloud Chariot finished Game 1, with Thompson drawing nothing to go along with his Hand of Cruelty and a hand full of lands.

Game 2 started off exactly like Game 1, with a Child of Thorns for Reeves on turn one and a Hand of Cruelty for Thompson on turn two. Reeves recruited Akki Underling to his cause on turn two and then lost Spiraling Embers to Thompson's Distress.

Reeves kept laying two-drops while Thompson searched for an extra land or two to bring some Barrel Down splicing Glacial Ray online. Thompson dropped to 10 before that happened, but once it did, Neil was left with a Child of Thorns and nothing else.

Late Goblin Cohorts and snide remarks from both players brought some smiles to the crowd, but Reeves couldn't muster anything big enough to withstand Thompson's men and removal, and Sokenzan Bruiser plus Devouring Greed plus a spliced Ray evened the match for Thompson. 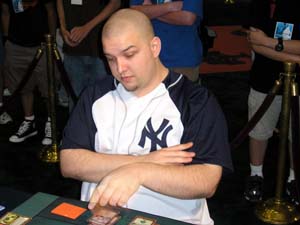 Reeves engages in a little sleight of hand…or does he?

Game 3 again started slowly for Thompson, as his draws simply would not cooperate. Reeves played out a series of weenies, and Mike traded with them early, but rapidly ran out of creatures.

Then on turn five, when Reeves had three other creatures on the board, Reeves proved why he's so good. On turn five Thompson failed to cast a creature, and Neil thought about what to do on his turn for about two minutes before casting Ghost-Lit Nourisher and passing the turn with no attack, clearly reading a Blind with Anger from Thompson's hand.

On the next turn he cast Shinen of Life's Roar and gave it haste with Akki Drillmaster, completely negating any real advantage from the Blind and dropping Thompson to 5 after he lost 6 total from the Oni-Slave that made an ever-so-brief appearance on the board.

At that point Reeves verbally mentioned that maybe he made a misread, but Thompson showed the spell to him on the next turn just before extended his hand, and dropping to two losses in the tournament.