Round 10: Start Fast or Go Home

were lots of angles coming into this round of action - the first round with fresh new draft decks. A member of the U.S. National team, Neil Reeves has helped push the Americans to the top of the team leaderboard on the strength of his 3-0 performance in the first draft pod. 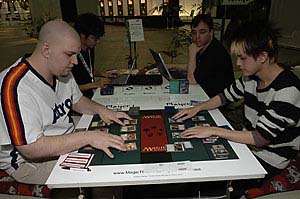 Neil and Kenji had contrasting decks.

While Kenji Tsumura was not a member of his national team, he was focused on surpassing Olivier Ruel in the Player of the Year race. He was also being chased by Masashi Oiso, who was a member of the Japanese National team. The National team competitors have an opportunity to pick up as many as six extra Pro Points via that exclusive day of action, so Kenji could not be too upset that his countrymen hit a little bump in the road.

While Tsumura waited for Neil to come over to the Feature Match area, Julien Nuijten and Tsuyoshi Fujita admired Kenji's Dimir mill deck which featured two Entrancers and three Induce Paranoia. Additionally the deck was sporting Convolute and Perplex. Julien looked at all the counterspells and offered some advice.

On the draw his counters would not be nearly as good. The players also updated Kenji on Olivier Ruel's disastrous draft day which was off to an 0-3 start.

Neil Reeves slid onto his feature match mat and shook his head at the 40 cards sleeved in front of him. "And now he gets to play me round one of this draft," muttered Neil.

This game was played at an almost blistering pace by Reeves, who won the die roll and led off with Terrarion and Thundersong Trumpeter. Neil was looking forward to getting in for two and frowned at Kenji's Dimir Infiltrator. 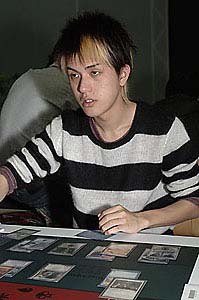 Kenji was behind the pace from early in the game.

"Man! What a blowout that guy is," said Reeves.

Neil cycled his Terrarion and played a second Trumpeter. Kenji had no turn-three play and passed with three mana up. Neil smelled a counter and tentatively offered up a Sell Sword. Kenji nodded to indicate it was okay. Neil tried a Courier Hawk and Kenji showed him Perplex. Neil looked at his hand and decided he liked it better than Courier Hawk.

Kenji tapped out for Entrancer on the fourth turn and Neil took it out of the mix with Faith's Fetters.

Kenji offered up Stinkweed Imp. Neil just kept up the barrage of guys with a Skyknight Legionnaire. The two Trumpeters shut out potential blockers and Kenji was quickly at 10.

Kenji tried to hide behind Drift of Phantasms but Neil enchanted it with Galvanic Arc and killed Stinkweed Imp. (Neil was terrified of Peel from Reality, which is why he enchanted Kenji's creature and not his own.) Kenji fell to six on the attack.

Kenji decided to dredge back the flier and he was able to stem the bleeding. Neil could only get in for two in the air. Kenji had been holding Induce Paranoia the whole game but never had a turn to use it. He finally had to use it on a Courier Hawk. He found Last Gasp waiting on top of his deck and took out a Trumpeter.

When Neil glumly said "go" it looked like Kenji had finally stabilized the board. He added Lurking Informant to his defensive board and finally had a win condition. Neil drew Viashino Slasher and played it with a grumble, knowing that he would not get many quality draws in the future thanks to the Informant.

Kenji did not use the Informant on his own turn, choosing to wait for Neil's end step.

Neil drew and raised an eyebrow. "One card?" he asked.

Kenji saw that Neil had drawn Dogpile and had exactly enough guys to kill him merely by attacking. Kenji took a peek at the top of Neil's deck with Lurking Informant.

"Oooh you saw a good one," smiled Neil, with a Master Warcraft on top of his deck. It would not have mattered if he had used the Informant.

"If he has Peel there I am destroyed. These guys…I guess that's why they make the game and don't play it anymore," joked Reeves.

Neil safely played a Trumpeter on turn two. Kenji was holding Convolute but decided to play Drift of Phantasms instead. Neil punished him by dropping his Forest and fattened up the Trumpeter with Moldervine Cloak. Kenji took five and played Vedalken Entrancer. Neil saw no reason not to send in his monster and Kenji was quickly down to 10. Neil added Ordruun Commando to his team.

Kenji passed the turn with five mana up. Neil tried to play Veteran Armorer before combat but Kenji Covoluted his plans. Neil simply swung with the Trumpeter since he had tapped his white mana and was not prepared to trade the Commando for the Entrancer. 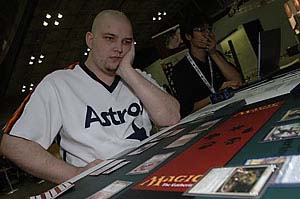 Neil was actually happy with his deck, contrary what you see here.

Kenji blocked the Trumpeter with his Entrancer and Last Gasped it. Neil sent it to a Fiery Conclusion and killed the Drift in response. Kenji had a Dimir House Guard but had almost no way out of the situation since Neil was going to dredge his Cloak back and put it on the Commando. Two turns later, Neil was 4-0 on Day Two.

After the match, I accused him of being misleading regarding the quality of his deck at the outset.

"I did not say my deck was bad," Neil clarified. "I was just disappointed because I thought my deck was going to be the best deck in the history of the game after the first pack. My deck is good…just not insane."

He laid out his first 10 picks in order: