Round 10: Steve O'Mahoney-Schwartz vs. Mike Long 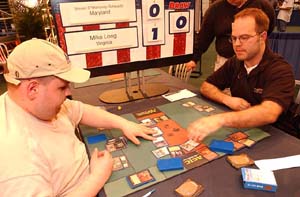 This match featured two of Magic's old school heroes who have fallen on hard times. Both are Pro Tour Champions that have had a string of bad finishes on the past year or two, and are looking for redemption today. This tournament must mean even more for Mike Long, who is a three time United States National team member, and also made Top 8 one year as well.

Steve mulliganed to start, and summoned Crypt Creeper on turn two. Mike answered back with Mystic Familiar. The Creeper got through unblocked, and Mike dropped Anurid Brushhopper. It attacked along with the Familiar for four on the following turn, and Mike brought out Angelic Wall to keep the Creeper from bashing him for two. Steve cast Aquamoeba and attacked with the Creeper. Mike blocked with the Wall, and Steve activated the Aquamoeba's madness ability to enchant the Creeper with Strength of Lunacy before damage. Mike responded with Sonic Seizure to kill it, discarding Arcane Teachings. Aether Burst slowed down the Brushhopper for a turn, but Steve was definitely going to have problems with it. 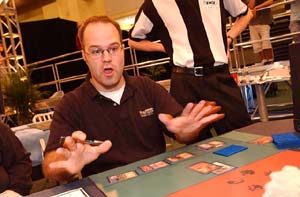 Slithery Stalker took out Mike's Familiar, but the Brushhopper was still coming through for three a turn. It was joined by Rabid Elephant, which changed things from bad to worse. Steve summoned Mirror Wall, but still couldn't stop the Elephant. Mike increased the pressure with Battlewise Aven. A few turns later, the game was over.

Steve opened with a first turn Careful Study. Mike joked, "If you drop two Rootwallas, I'm going to call shenanigans on you." Crypt Creeper came out on turn two, but died to Flame Burst. Centaur Chieftain was summoned on turn four, and dealt three to Steve. Concentrate got Steve ahead on cards, but left him tapped out as Mike attacked once again with the Chieftain, and followed up with Battlewise Aven. Steve's Faceless Butcher got back some tempo, taking out the Chieftain. The Aven attacked for two, bringing Steve down to twelve, and Mike played Border Patrol to hold down the fort. Steve untapped, and cast Rancid Earth on Abandoned Outpost. 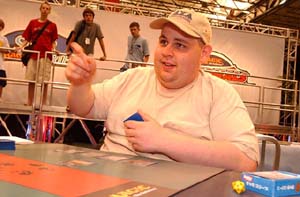 Mike attacked for another two damage, and his Firebolt was Liquified. Aether Burst bounced Border Patrol, clearing the way for the Butcher to deal two. Scrivener brought the Burst back to Steve's hand. The Patrol was replayed, but taken out with the help of Slithery Stalker. Cephalid Scout followed, and Steve had the game remarkably in his favor. Wormfang Behemoth swung the pendulum even further. Steve put Strength of Lunacy on the Behemoth and put all his chips on the table, attacking with all his creatures. Mike had his second Flame Burst to take down the Butcher. He blocked and killed the Stalker, getting back his Border Patrol. He then took his turn and enchanted the Patrol with Arcane Teachings and attacked for five, before dealing the final point of damage to take the game and match.