Round 10: Steve Wolfman vs. Ben Page 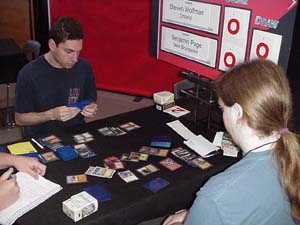 Steve Wolfman and Ben Page were in pretty good shape to make Top 8. Wolfman was in slightly better shape, as his record was 7-1-1 while Ben was at 7-2 but both players were still in contention after this round regardless of the outcome of this match. Wolfman wanted to win his one so he could draw his way to the day 3 alongside his 2020 teammate Elijah Pollack. Elijah was already able to draw and was along the rail cheering on the Wolf. Their third teammate, David Rood was also on the rail but he had already been eliminated from contention. When asked to explain his performance Rood offered, "They wanted me to play Constructed."

Wolfman was playing a Wake deck with a different kill mechanism than your run of the mill Wake deck—no elephant tokens here folks. Ben is playing three-color slide, which is Wolfman's best possible match-up.

Wolfman played a Brushland to open the game, which prompted a low groan from Ben. "I don't like seeing that much." "Yeah, this is a pretty good match-up for me."

Ben cycled into a third turn morph but Wolfman Wrathed it away—it was an Exalted Angel. That seemed to exhaust Ben's early game and he cycled a small territory's worth of lands to find some pressure. He settled for Laying Waste to Wolfman's Skyshroud Expanse but Wolfman had plenty of land and was inexorably creeping toward the lock with a Mirari's Wake one turn and Mirari on the next.

Ben had so mach land he was able to hard cast a Krosan Tusker—he also had two Nantuko Monasteries. Wolfman wrathed away the creatures and Moment's Peaced the lands as he compulsed for the Cunning Wish he needed. He found it and got a Moment's Peace and an Early Harvest, which sent a murmur of excitement through the onlookers.

On his next turn he started abusing Deep Analysis and Mirari to dig deeply into his deck. When that did not yield he Cunning Wish he needed he used Early Harvest to put a degenerate amount of mana in his pool and began to compulse. Finally he found the Cunning Wish and flashed it triumphantly. Ben knew he was dead but asked Wolfman to show him how. 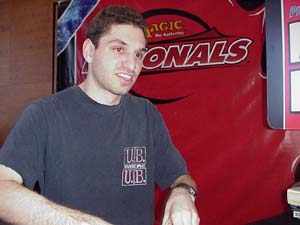 Ben nodded admiringly and they prepared for the next game. "I drew too many lands that game—sure a bunch cycled but..."

Wolfman finished the thought, "You don't want to be hard casting Tuskers."

"That seems a lot faster than the Elephant Ambush version although it doesn't really matter. My plan for beating Wake is to not play against it."

Ben opened up with a turn two Lightning Rift before Wolfman could get counter mana available. Page followed it with a turn three Astral Slide. He missed his fourth land drop and his opening seemed less impressive when Wolfman Cunning Wished for Ray of Revelation at the end of his turn. When Page cycled away a Starstorm to find mana at the end of Wolfman's turn, the Wolf took the opportunity to cast the Ray on the Rift.

Land number four was still eluding Ben but Wolfman was developing nicely and played a Compulsion. Ben fourth land came in the form of Wooded Foothills and he used his own Ray of Revelation at the end of Wolfman's next turn to kill the Ray, "Here's a free card for you!" Wolfman sacrificed the enchantment and took his card. 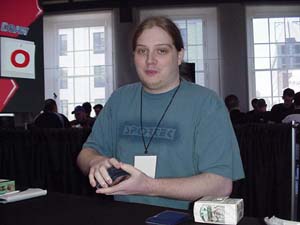 When Ben attempted a morph the Wolf flashed back his Ray in response to deal with the Slide. He untapped and once again "edicted" the face down Angel with a Wrath. Ben's Lightning Rift was countered although he did get a Boil to resolve when the Wolf activated a Krosan Verge, "I was expecting that..." Wolfman was still in fine shape and he played a Mirari. A few turns later he was able to start going off.

Ben – "Do you have a way to deal with Slice and Dice?"

"I don't kill you with tokens. I can deck you with Opportunity..."

"Win again and I will see you in the Top 8 as well. Please!"