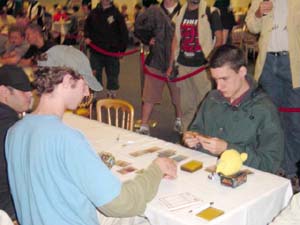 Stewart is playing a land destruction deck of his own design that many have seen as a wise metagame call and the 7-1-1 record has he achieved seems to back this up. His opponent is Jelger Wiegersma who is a GP veteran and was part of a team featuring current World Champion Tom Van de Logt and PT player of the year runner up Kamiel Cornelissen that made top four at a team GP.

Stewart chose to go first and after some thought mulligans his opening hand before keeping the hand of six. The hand was not great however and Stewart was soon stuck on two land. This proved crucial as he was not able to Vindicate turn three and when the Vindicate was attempted the following turn, Jelger had Absorb mana open and did just that. This early play was crucial as it allowed Jelger to stay one step ahead of Stewart's efforts to destroy his mana base. A Goblin Trenches made Stewart's land kill even less effective and between the goblin tokens and Prophetic Bolts, Stewart was under real pressure. He concedes when his Sabertooth Nishoba is countered. Stewart managed to kill around eight land that game but the lack of the third turn LD and subsequent stall was punished by a land heavy draw by Jelger.

The next game went more Stewart's way, with Jelger lacking early blue and Stewart punishing for it. With no blue available Jelger played two Sunscape Familiars during the first few turns, one of which is killed by a Flametongue Kavu. The Kavu started to apply beats the following turn and Jelger declined to chump with the familiar. Jelger then played an answer to the Kavu in the form of a Galina's Knight, finally getting blue mana from a Shivan Reef. The Reef was killed next turn as Stewart continued his assault. When Jelger failed to drop a blue source the next turn Stewart took advantage of this and dropped a Sabertooth Nishoba, Jelger was visibly upset about the big cat hitting the table but there was nothing he could do. Goblin Trenches was played as a way to apply pressure back on Stewart but it was Vindicated and Jelger conceded shortly after.

The third game was again decided by Stewart's mana. This time it was not a lack of it but an abundance of pain lands. With Forests as his only basic lands, Stewart was punished by the multi color nature of his deck, a good example being Rith's Charm which was costing Stewart two life every time he cast it. In the end this self inflicted pain prove too much and when Stewart tapped a Battlefield Forge for red to play a Flametongue Kavu as an answer to a Lightning Angel. Jelger played Fire dealing him lethal damage. Stewart had taken eleven damage from his painlands in the course of the game, which had lasted around seven turns.