Round 10:
Stolen and Consumed Hopes

As the saying goes: one man's trash is another man's treasure. After seeing how his second Draft here at Pro Tour Dragon's Maze went, it's clear that few people know this as well as Reid Duke.

After a difficult draft, Duke ended up with a rare-laden deck which he used to dispatch Tomoharu Saito in a very close three-game match in the first Pro Tour meeting of these Magic superstars.

"We're playing for the first time, right?" Saito, a four-time Grand Prix winner and former Player of the Year, asked with a smile.

"Yeah," confirmed Duke, a Grand Prix winner himself. "I've watched you for a long time, though. I'm a big fan." 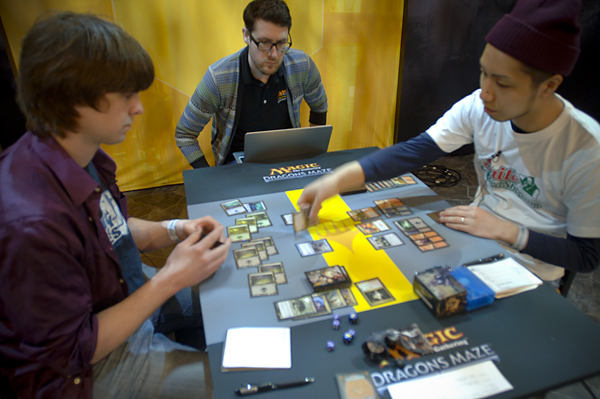 Reid Duke and Tomoharo Saito got a chance to play against each other for the first time, with Duke leaving the match ahead 2-1.

Duke rode his rares to victory over the course of the match, but it wasn't always clear that his deck would be as powerful as it ended up being. His draft was incredibly difficult to read, and he ended Dragon's Maze without a clear direction. After opening up a Consuming Aberration in Gatecrash, his move into Dimir was rewarded with bomb after bomb. The capstone moment was a very late Soul Ransom, a card that would prove very important in the deciding game of this match. Dimir was already a very underdrafted guild in triple Gatecrash, and it is even more maligned with the full block in play.

The first of Duke's rares to make an appearance came into play early in the first game where one of his two Abrupt Decays teamed up with Treasured Find to hold off Saito's early aggression. Saito's Rakdos deck had provided him creatures on turns two and three, but they never got to attack once. The delay afforded by the Arupt Decays was enough to allow Duke to land Consuming Aberration, Desecration Demon, and Stolen Identity on consecutive turns. Any one of those would not have been enough to stave off Saito, who had managed to deal 9 damage to Duke over the course of the game with his Lobber Crew, putting him preilously low. The combination of them, however, took away all of Saito's outs. 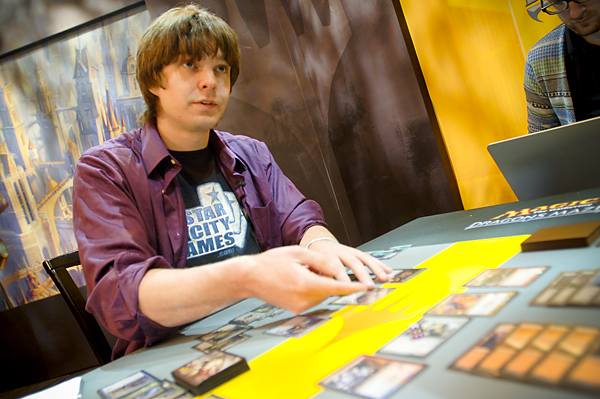 Duke's deck has a plethora of powerful rares, including some monstrous Dimir cards.

The third game featured yet another bomb rare that swung the game early for Duke. Facing down a pair of Frostburn Weirds, Duke used Soul Ransom to gain a massive advantage over Saito, forcing him to discard a Rakdos Drake and Dead Revelers to retain his creature, creatures which would have been extremely relevant against Duke's ground defenders. The Drake alone accounted for half of Duke's life total in the game that he lost, so getting that advantage was immense. Saito managed to keep things close with his pair of Frostburn Weirds, even managing to trade them each off with a Consuming Aberration and Lotleth Troll over the course of the game. In the end, though, Desecration Demon and Maze Abomination proved too large for Saito to deal with.

"I was a little light on lands, too," Duke admitted discussing the Ransom. "I missed my fourth land drop the turn before, but when I got to draw those two cards from the Ransom, I was fine. I got to catch myself back up and draw the cards I needed to get back into it."

Saito did manage to steal a game from Duke using a Civic Saber on a Rakdos Ragemutt to act as an effective Abyss every turn, but Duke was still almost able to pull it out thanks to the power of his rares. 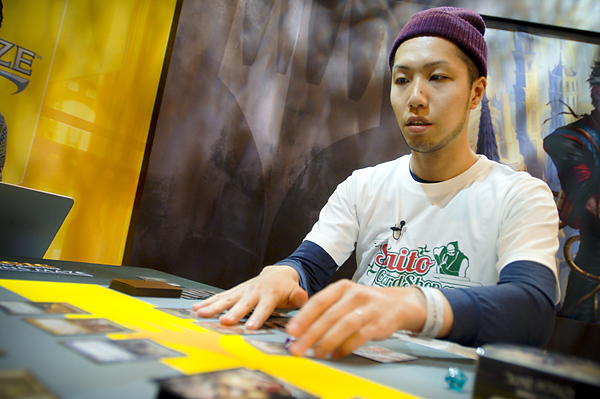 While Saito was able to steal one game with his aggressive Draft deck, it was not enough to take the match.

"I had Gaze of Granite in my hand the whole time, but I was trying to be greedy with it," he said with a thought. "If I blew it early, I could have killed the Saber and his other creature, which would have been something, but I wouldn't have really been in that great of a position. If he followed that up with an Augur Spree, Makka, or anything like that on my blocker afterward, I would have been in big trouble."

Match Notes: Duke briefly described his draft after the match.

"My first pick was fairly unexciting, taking an Ascended Lawmage over a Guildgate. There really wasn't anything else. I grabbed a Steeple Roc and a Pilfered Plans over the next couple of picks, but then things really started to disappear. At the end of the pack, I only had like four playable cards and a Guildgate, and I thought I might be in either Golgari splashing white or blue. When I opened the Aberration, it made my mind up."

Saito had three copies of Frostburn Weird in his deck, and he drew all of them in his final game against Duke. While it worked out well initially due to Duke's blockers, he soon found himself in a catch-22 where he had to pump to force through damage to prevent things from running too long, but that prevented him from developing his board.