Round 10: Takahiro Fukuchi vs. Itaru Ishida 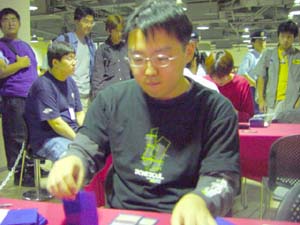 Itaru Ishida is best recognized as the brains behind the Japanese Team Masters demolition crew known as Panzer Hunters. He's also widely considered among the top five Japanese pros. His opponent is amateur Takahiro Fukuchi, who's been ripping up the tournament. He's sitting pretty at 8-0-1.

Fukuchi won the die roll and started things going. It was soon crowded on the playing field. With just two plains apiece they had eleven creatures on the table. Fukuchi had all four of his Spurnmage Advocates and Tireless Tribe, while Ishida had a Tribe, a Suntail Hawk, an Advocate, a Beloved Chaplain and two bird tokens from a pitched Battle Screech.

Fukuchi grew tired of the stall. He drew up his third land and pitched Glory, swinging for five unimpeded. Ishida returned fire for six and played a second Advocate. Things were not looking good for Fukuchi. He swung again, but had nothing to add to the board. Ishida hit for seven and dropped a second Chaplain.

That was enough to convince Fukuchi to hold back. Ishida's three fliers and two Chaplains brought him to two, and on the following turn he scooped. 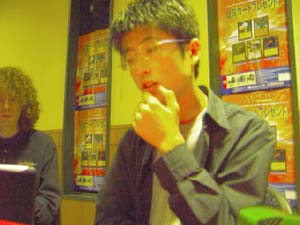 Fukuchi's all-action opening hand in Game 2 was tragically short on lands. His next was packed with three Prismatic Strands. He had to keep.

What followed was nothing short of brutality. Ishida started with Chaplain and then Tireless Tribe before firing off a pair of Battle Screeches for eight fliers. Fukuchi's Strands kept it from being a complete massacre. Ishida played a third Battle Screech, and why not?

Unfortunatley, rather than drawing creatures, Fukuchi was drawing his Divine Sacraments. He stopped four lethal attacks with his strands while he dug with Deep Analysis. After stopping the sixth attack, his Cunning Wish bought him two more turns. He refused to add creatures to the table, as his sideboarded Kirtar's Wrath was his only hope. Not only did he not draw it, but Ishida was safe behind Envelop