As Antonino De Rosa sat down for Round 10 against Conley Woods, he spotted the player board with the previous round's match still displayed on it.

"Ali Aintrazi? Who is that?" De Rosa asked.

"That's the national champion—you should know that," deadpanned Woods.

"I know a little something about the national champion," said De Rosa, himself a former U.S. National Champion in 2005. 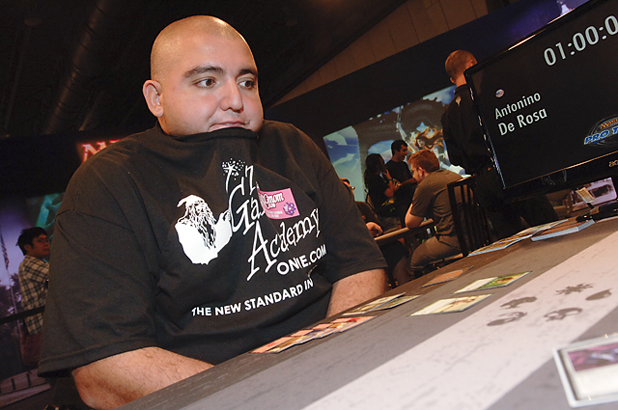 This is former U.S. National Champion Antonino De Rosa. You may have heard of him. He's kind of a big deal.

De Rosa is an old-school pro who hasn't played regularly on the Pro Tour since about 2006, and he noted a few changes with the feature match arena he used to be a regular in.

"Back when I played, I remember when this was red," De Rosa said, referring to the now-tan stripe on the feature match table used to indicate when a creature is attacking.

The Tan Zone just doesn't have the same ring to it.

Both players had managed the unfortunate feat of a 5-0 / 0-3 Friday and were looking to battle back in the second draft. De Rosa was sporting a self-acclaimed "bad deck with two Titans"—Primeval Titan and Inferno Titan—while Woods had a mono-black monstrosity that could close quickly with massive Drifting Shades.

Woods was first to play and had the first action with a turn-two Distress.

The next few turns saw the players trading haymakers. A Stampeding Rhino traded with Woods's Vampire Outcasts—pumped thanks to Scepter of Empires—and a Drifting Shade, backed by five Swamps, clocked De Rosa for 5 through the air.

The Garruk's Companion crashed in to enable Stormblood Berserkers backed by a Bonebreaker Giant, but it was too little, too late. With De Rosa tapped out, Woods' 9/9 Drifting Shade stormed through the Tan Zone to drop De Rosa to one. A ping with Scepter of Empires was all it took.

was all about trading one-for-ones for roughly eighty-seven turns. Give or take.

Cudgel Troll wasn't even as lucky as any of those cards, as it was prematurely Distressed and didn't even make an appearance on the battlefield. The Act of Treason, Plummet, and Bonebreaker Giant also revealed didn't promise much action with De Rosa stuck on three lands at the time.

The trading continued as both players were land-light. A Devouring Swarm devoured itself in response to Act of Treason, and with both players on four lands, the battlefield was completely empty.

Even with a clear board, Woods paused and thought before playing his fourth land.

"You have choices? That is not good for me," De Rosa said.

When he finally hit his fifth land, De Rosa had at least one option of his own, landing the Bonebreaker Giant. Woods, naturally, had an answer, sending it to the Brink of Disaster.

A topdecked Naturalize pulled the Bonebreaker back from the Brink of Disaster and allowed the Giant to attack in ... for exactly one turn. Then it was right back to a second Brink of Disaster. Again, the board was on parity. 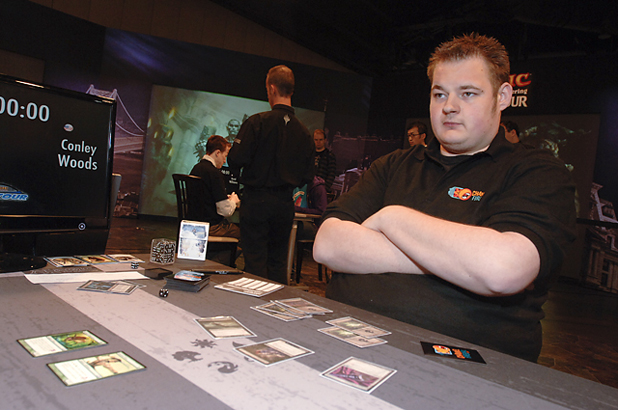 Goblin Bangchuckers wasn't the most dangerous follow-up, but any action at the point was a better than nothing.

"Yeah, don't mind if I do," said De Rosa as he prepared to chuck some bang.

Woods, though, did mind, and killed the Bangchuckers with Sorin's Thirst as the two continued to trade.

A third Distress did the same dance as before. Woods took a Fling from a hand of Forest, Fling, and Stormblood Berserker.

"You have a lot of Distresses," noted Antonino. "You take all my good cards."

Finally, after all that back-and-forth, Woods summoned a Drifting Shade and followed it with a Vampire Outcast. Still on air and with nary a Titan in sight, the Shade needed just two quick trips through the Tan Zone to take the match.