Round 10: They're Having Flashbacks

Nico Bohny was 8-1 coming into round 10. After going 5-1 in Standard with Blue-White Delver, he handily 3-0'd his first draft pod. Standing in his way this round was Josh Utter-Leyton, who also 5-1'd Standard (with Tempered Steel) before 3-0'ing a draft pod of his own. 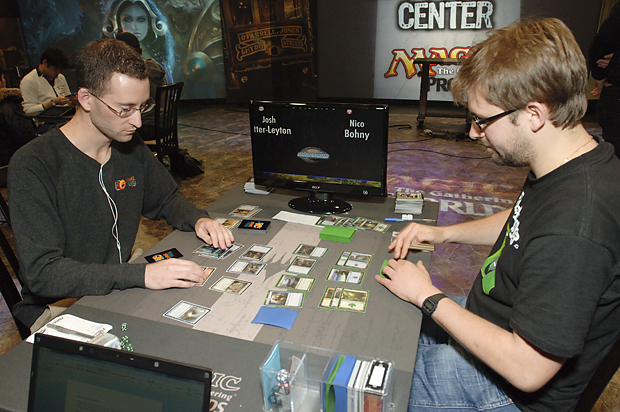 Both Nico Bohny and Josh Utter-Leyton have 8-1 records. Who will keep their relatively untouched records going strong?

Bohny won the die roll, and elected to play, trading his early Civilized Scholar with Utter-Leyton's One-Eyed Scarecrow. Unfortunately, this allowed Utter-Leyton to replace it with a Makeshift Mauler to hold off Bohny's Undead Alchemist. Bohny instead took to the air with a Murder of Crows, but Utter-Leyton hit that with a Grasp of Phantoms, then knocked it off the top of Bohny's deck with a Dream Twist. Bohny replaced it with a less impressive 3/3 Boneyard Wurm.

Looking for a way past Utter-Leyton's Mauler, Bohny tried to summon a Skaab Goliath, but it got Lost in the Mist, and the Undead Alchemist wandered off for a bit to try and find it.

Utter-Leyton finally revealed what his Blue-White deck was splashing red for, and cast Burning Vengeance, before flashing back a Feeling of Dread to kill off the Alchemist once and for all. He attacked with his Mauler and a Deranged Assistant to finally deal the first damage of the match. 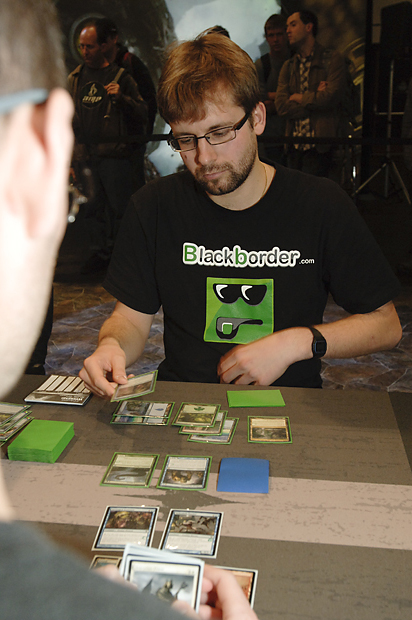 Bohny's spiders, courtesy of a Spider Spawning, were too fast of a clock for his opponent's Burning Vengeance to handle.

However, Bohny was also reaching outside of his colors, and cleared the table in a Blasphemous Act. Utter-Leyton repaired his side of the board with an Armored Skaab and an Avacynian Priest, while Bohny cast a Spider Spawning for eight.

Utter-Leyton flashed back a Desperate Ravings to take down one arachnid, and summoned a Moon Heron, before taking 5 as the Spiders swarmed aggressively in his direction. Bohny utilized his Shimmering Grotto to flash back the Spider Spawning, taking his Spider count up to thirteen. Two attacks later, and Utter-Leyton was buried under the eight-legged menace army.

"Are you gonna play or draw?" Bohny asked, as they shuffled.

Utter-Leyton again managed a turn four Makeshift Mauler, and again had the Grasp of Phantoms and Dream Twist combo for Bohny's Murder of Crows. The Mauler dropped Bohny to single digits, but before Utter-Leyton could seal the deal, Bohny again cleared the room with a Blasphemous Act.

This time, Utter-Leyton recovered with a Moorland Haunt, while Bohny summoned a 6/6 Boneyard Wurm, and followed that up with a Spider Spawning. Unable to finish the battle in the air, Utter-Leyton simply flashed back Dream Twist, retrieved it with Runic Repetition, and spilled the rest of Bohny's library into his graveyard.

Bohny elected to play in game three, keeping his hand while Utter-Leyton threw back his seven.

Utter-Leyton summoning a Deranged Assistant and a Moon Heron, as Bohny summoned an Orchard Spirit, and Undead Alchemist.

Utter-Leyton fell to 18, and attacked back for 3, before summoning a Chapel Geist. Bohny attacked with both creatures. The Geist ate the Spirit, while the Alchemist milled 4 cards, recruiting one Zombie for its efforts. A Woodland Sleuth swooped in to successfully solve the murder of the Orchard Spirit. 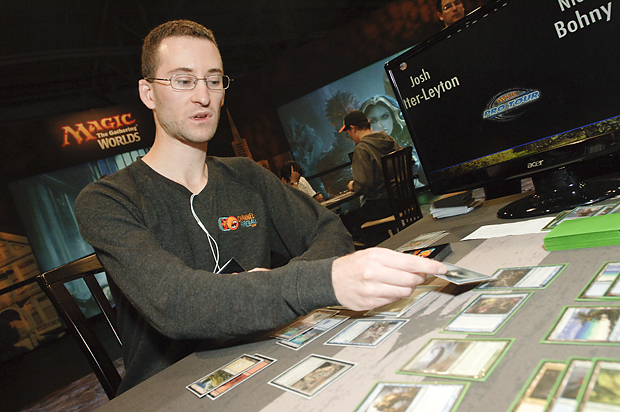 Without a fourth land, Utter-Leyton thought about frowning. (Have you ever seen his forehead move? I have not). He attacked with just the Heron, dropping Bohny to 14, before summoning a Mindshrieker.

Bohny cast Forbidden Alchemy before attacking with his Alchemist. Utter-Leyton offered the Chapel Geist trade, and Bohny accepted. Utter-Leyton attacked for 4 in the air, and summoned a Makeshift Mauler. Bohny needed to find some spiders, and quick. He cast a Think Twice with flashback, but came up short.

Utter-Leyton activated the Mindshrieker once, hitting Forbidden Alchemy. He tried again, and was rewarded by a Skaab Goliath, easily giving him enough to fly over for the win.