Round 10: Tobey Tamber vs. Sam Lau 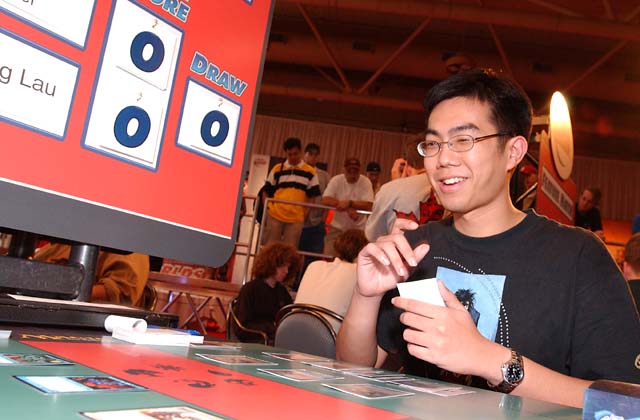 Tobey Tamber is an American currently living in Taipei, furthering his career as a teacher in addition to putting himself in a good location for Magic, as can be seen by the fact that he has won a Grand Prix this season, as well as made the Top 8 at the APAC Championships just recently. Sam Lau, likewise, has seen some success, having won Grand Prix Singapore as well as making the Singaporean National Team to arrive at Worlds this year. Sam won the Bear-and-Queen game, and elected to draw first amidst the friendly banter from these two Asia-Pacific players. Both players kept their hands and played a first turn island, but Sam's island comes with a Ceta Disciple. Tobey played a second island, while Sam gets a fast start, playing a swamp and Cavern Harpy after attacking for one. Tobey played a plains and Disciple of Kangee, while the Harpy got a taste for the Red Zone and Sam played his third land type, mountain, on his third turn, followed by recasting the Ceta Disciple. Tobey played a second Plains, then a Crimson Acolyte, and attacking with the Disciple. Sisay's Ingenuity on the Acolyte was met by Scorching Lava, and Sam then untapped and attacked, then played a Volcano Imp to prove that he is, in fact, the aggressive player in this matchup. 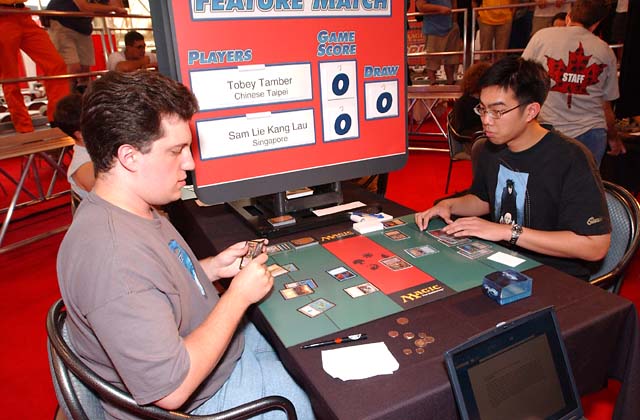 Tobey elected to not attack his Disciple into the Imp, and played Living Airship. The Airship traded with the Volcano Imp via the Ceta Disciple, and was quickly replaced with Firescreamer. Tobey played Diversionary Tactics and Stormscape Apprentice, while Sam attacked again. Firescreamer and Disciple of Kangee traded in combat, but the Harpy-Disciple attack kept putting Tobey further and further behind, with Tobey at four life before he was able to add a Tower Drake to his board to help with the Stormscape Apprentice's holding tactics. Sam played his Nightscape Battlemage, returning Tobey's creatures to the hand, and Tobey accepted defeat.

Tobey's deck was full of Acolytes and even a Crusading Knight, so he didn't even touch his sideboard while Sam has to toggle quite a few cards back and forth to deal with the problematic Clerics. Tobey had to make a careful decision as to who should play first, and he decided that drawing first was what he felt most comfortable with. Again Sam started with an island and Ceta Disciple, to Tobey's plains. Sam attacked and played a mountain, this time not having quite the blinding start. Tobey played an island and Sam attacked, missing land drops, while Tobey got to four mana and played Benalish Heralds. Sam immediately drew the second island to cast Metathran Transport, and Tobey played land 5 while Sam attacked for one, played a third island and cast Rainbow Crow. Tobey drew a card at end of turn, then untapped and played Sawtooth Loon, pushing two lands from his hand to the bottom of his library. 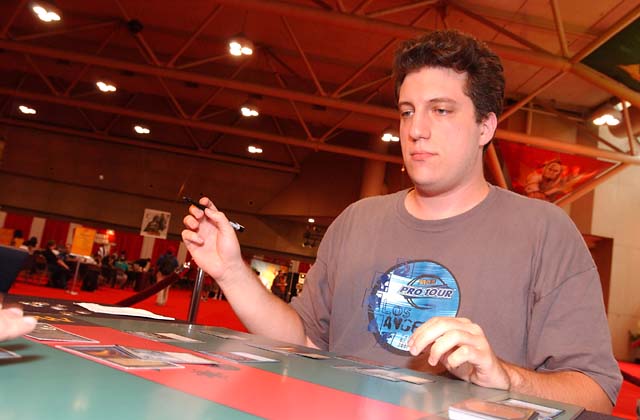 Crimson Acolyte then joined the party, though Sam took it calmly enough. Sam's air goons continued to attack, with the help of a Disciple, and Tobey dropped to eleven as Sam played a Living Airship to increase Tobey's problems. Nightscape Battlemage is enlisted by Tobey to beat Sam around the head and shoulders, returning the Airship and Crow to his hand and allowing his Heralds and Acolyte to attack. Tobey goes to eight from the Disciple and Transport, and Sam replayed Living Airship. Tobey got off Barrin's Spite, aimed at the Disciple and Airship; Sam decided that the Airship would die and the Disciple would live, since it had been doing a good job recently. Tobey attacked for five after that, and played Disciple of Kangee, getting a bit of headway in the air war.

Metathran Transport continued with his attack, and a Breath of Darigaaz with kicker surely spelled bad news for Tobey. Crimson Acolyte survived naturally, and saved the Nightscape Battlemage while dropping Tobey to three life. With Sam at eight life, the Acolyte and Battlemage swung, and Tobey played Marsh Crocodile, returning the Battlemage to his hand, and Sawtooth Loon didn't show any help before the Metathran Transport/Disciple combo killed him on the next turn.