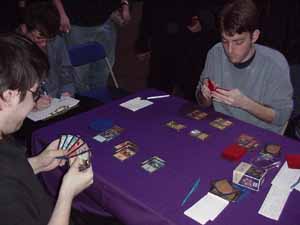 Trey Van Cleave, fresh off his top 8 at Grand Prix New Orleans is trying to make it consecutive top 8s here. He won Grand Prix Philadelphia 2000 and was doing very well on the pro tour before taking a forced yearlong hiatus from the game. He is back, though, and has an aggressive red/green deck, complete with Ravenous Baloth and plenty of other big green men.

Facing him is Pro Tour regular Zvi Mowshowitz. As a member of Team Your Move Games, Zvi took the Grand Prix New Orleans title. He also has a Pro Tour win at Tokyo and several other Top 8 appearances.

As the players shuffled, Zvi requested that a table judge be present. Before presenting his deck and knowing his own reputation, Trey asked for the judge to check his sleeves before presenting. A few sleeves were replaced and the match began. 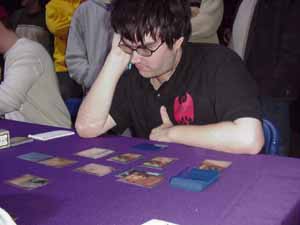 Zvi won the die roll and chose to play first. He led with a turn two Riptide Biologist against Trey’s turn one Birchlore Rangers. Zvi was able to follow the Biologist with a turn three Sparksmith, but lacked a third land.

Trey cast his Ravenous Baloth to get some pressure going alongside his recently cast morph, but all he could do was come through for two damage.

Zvi, still stuck on two lands, cast Lavamancer's Skill on his Riptide Biologist and used it and the Sparksmith to finish off Trey’s morph and Birchlore Rangers, respectively. The morph proved to be a Skirk Marauder, one of Trey’s few solutions to the skilled creature with protection from beasts.

On turn six, Zvi found his third land and used it to cast a Gempalm Incinerator. Now able to deal four damage to any creature on the board, Zvi was able to practically coast to victory. The Ravenous Baloth went down first, followed by a pair of Snarling Undoraks. Because he was unable to kill the skilled biologist, Trey needed to play his creatures as morphs, where they would get shot down by the biologist, or get out two creatures with enough toughness to survive taking four damage. A few attacks from Zvi earned him the game.

Trey was a little miffed at the power of Zvi’s red cards, as he was feeding him for two of the three packs. Somehow, Zvi had better red than Trey despite that. 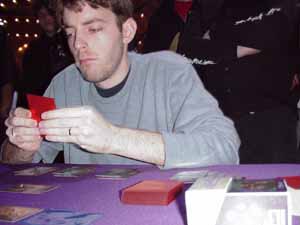 Trey chose to play game two, and again led off with a Birchlore Rangers. He followed that with a Wellwisher. Zvi simply cycled Solar Blast to finish the Wellwisher before it got out of hand.

Both players summoned morphs, which traded with each other, and Trey summoned a Symbiotic Elf. Zvi countered with Riptide Shapeshifter.

Trey suddenly had a major decision to make. He could use the Pinpoint Avalanche to finish the shapeshifter or he could risk Zvi activating it and busting out whatever bomb he may have. Trey chose the conservative route and smoked the shapeshifter.

Unfortunately for Trey, Zvi simply drew his Imperial Hellkite and summoned it. The 6/6 flier combined with a Mistform Seaswift to end the game, and the match, in short order.