Round 10: Tsuyoshi Ikeda vs. Itaru Ishida 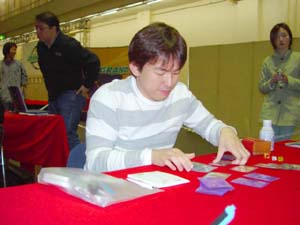 Tsuyoshi Ikeda is a pro from way back, often seen in the company of his boys from shop-fireball. At the Venice Masters Gateway they came within one match of adding another Japanese team to the action. Opposite him is another Team Masters mainstay, Itaru Ishida, the quiet mastermind behind Panzer Hunters. Ikeda is with red-green, and Ishida is running a black-green build with two Death Matches but no Symbiotes to take advantage.

Ishida won the right to play first, but despite dropping two swamps and a forest made no play. Ikeda was already on the board with a Goblin Taskmaster and added a morph to the mix. Ishida cycled Death Pulse to be rid of the goblin and then set up Death Match. Ikeda held back. Ishida smashed his morph with one of his own. Ikeda elbowed with Barkhide Mauler. Ishida played two morphs and got rid of it. Skirk Outrider from Ikeda left just one morph standing.

Ishida topdecked Elvish Soultiller to be rid of it. Now it was Ikeda's turn to spend two morphs destroying a creature. A morph from Ishida returned the favor. When Ikeda showed Barkhide Mauler next, Ishida flipped over Nantuko Vigilante in response, destroying his Death Match. The Vigilante traded for the morph with ease. He made another face-down, and then doubled-up on Ikeda's incoming Mauler. Ikeda showed Tribal Unity for four, but Ishida flipped up Spined Basher, netting the two-for-two.

It looked like Ikeda was ahead, but Ishida wouldn't stop drawing goods. Ikeda answered Berserk Murlodont with Chain of Plasma, but had no witty rejoinder to Enormous Baloth. The Krosan Tusker follow-up was enough to earn the scoop. 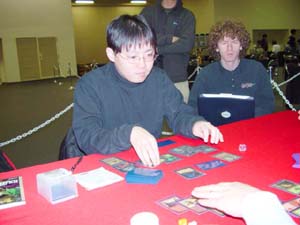 Ikeda led Game 2 with Stonewood Invoker. Ishida matched with Withered Wretch. They traded, and Ikeda made a morph. Ishida's only play was Wirewood Elf. Sure enough, Ikeda had Skirk Commando to get rid of it. Ishida cycled Death Pulse, but still found no fourth land.

Ikeda came down with Invoker and morph. Ishida pulled land number four and double-amplified a Canopy Crawler. Ikeda's morph got through and dealt four when it was shown to be Branchsnap Lorian, and then he made a Snarling Undorak. Ishida had another Death Pulse to fell the Undorak. Ikeda goggled. While Ikeda drew lands, hoping to turn on his Invoker versus the ruling Crawler, Ishida did the same, enabling a Treespring Lorian. Ikeda hit eight and swung in. As soon as Ishida double-blocked he knew he was sunk. Ishida showed him the Vitality Charm to take the match.