Round 10: Under the Radar

hilean native José Luis Echeverria Paredes has found himself as the lone undefeated player coming into Round 10; not bad at all for his third Pro Tour. American Pro Tour champion Mark Herberholz was the man tapped for this round to wrest José from his perch. Mark was sitting on a very healthy 24 points and knew full well that he was in direct contention for the Top 8. A win here would bring the distinction that much closer for either competitor. 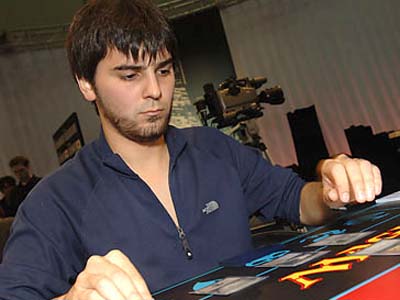 Both players were running black-blue control, although Mark's version touched white for additional Mystical Teachings options. Pull From Eternity had been an all-star Teachings target all weekend, according to the players running that configuration. This game started out as most control mirrors do, with a series of land drops and passes. The occasional Lens or Totem resolved, but for the most part it was a spell-free interaction. Who would cast first?

Herberholz had no interest. After getting to seven mana, Mark laid the mirror-breaking Urza's Factory, happy to make 2/2s over getting into any kind of counter war. This was particularly effective against José, whose hand was chock full of Cancel, Dismal Failure, and Draining Whelk; all pointless against the Time Spiral uncommon. Mark began languidly assembling his 2/2 worker contraptions. José alternated between discarded Mystical Teachings and resolved kill spells. Mark had no interest in fighting over Tendrils of Corruption on a token when he could so easily make another. Indeed, Tendrils and Damnations continued to fly unabated, all the while José's life went down in two and four point increments. Aside from one teased out counterspell, Mark had not played a single non-mana source by turn thirteen. And he was winning.

José fought on as well as he could. His morph resolved and flipped into Brine Elemental, buying a turn at a scant two life. José, showing Chilean bravado, attacked with his Brine Elemental one turn and played Tendrils of Corruption on a token, bringing the life totals to 6-15. Mark shrugged and made a guy and attacked for four, returning José to two. Briney attacked again, and J cast and resolved a Damnation. At the end of José's turn, Mark finally played the format MVP: Teferi, Mage of Zhalfir. Both players unloaded their clip of charge counters, but at the end Teferi manged to resolve against a backdrop of Draining Whelk, Draining Whelk, Dismal Failure, and Cancel. José immediately conceded.

Despite the brevity of the previous game's description, this was not exactly a speedy affair. With 25 minutes remaining in the round, the judge politely asked the competitors to sideboard quickly. In an obliging show of diplomacy, the two players did move quite fast. It's possible what looked like consideration was just two people very, very familiar with the mirror match.

José came out blazing this game. His opening volley included a pair of Shadowmage Infiltrator, which resolved and dealt their damage. Herberholz was frustrated sitting on Damnation against a counter-free opponent, without the second black. José recognized the situation and wisely kept his Urborg in hand. Mark did manage to Terramorphic into another Swamp, by this point José had drawn a Dismal Failure. Back against the wall, Mark tried a last ditch Urborged Tendrils against an attacking Phyrexian Totem, but of course José had another counter and they began to shuffle for Game 3.

With time running out, both played at a very clipped pace. José started strong with a Prismatic Lens accelerating into an authentic Japanese Plague Sliver. Mark had the perfect answer, using a slightly charged Dreadship Reef to find and cast a Temporal Isolation on the 5/5. José grimaced, but accepted the personal Copper Tablet. The game continued with the standard exchange of threats and responses. A suspended Aeon Chronicler took a Pull From Eternity, Teferi got nailed with Sudden Death, etc.

All of a sudden, the game was put on hold. A spectator had noticed the incremental life loss and pulled an English Plague Sliver out of his binder to show the table. Unexpectedly, the Plague Sliver said it dealt damage instead of life loss, and thus Temporal Isolation would prevent it all. That was nice for José to know, but what about the four points already lost? After a brief judge consultation, it was ruled that the life loss would stand as it was both players responsibility to know what their cards do. A stinging lesson on the use of foreign cards at a Pro Tour. 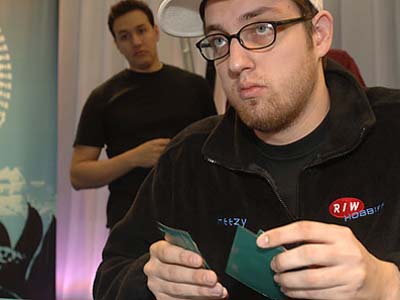 With that resolved, the players got on with the business of winning the match. Quickly Herberholz pulled ahead, using a well-timed Extirpate to Coercion a Teachings' taught Dismal Failure out of José's hand, library, and grave. With incremental but quickly mounting edge, Mark continued to gain advantage with cards and life totals. A Teferi's Moat set to black shut down another Plague Sliver. José's facedown Shapeshifter was Tendriled, and soon after, Urza's Factory came back online. With multiple Mystical Teachings at the ready, Mark would overwhelm his opponent in time.

Unfortunately for the American, time was the one thing the match was short on. Even with his advantages, Mark couldn't deal damage particularly quickly. With an opponent at 11, Mark was looking to get through quickly when time was called. Three extra turns wasn't quite long enough to pierce José's defenses, and Mark had to settle for the draw. José, for his part, had to be pleased to remain undefeated.