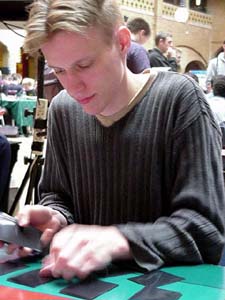 After nine rounds of play, the only undefeated player of the tournament was Victor van den Broek from the Netherlands. He was paired up against a Team Punisher player, Anton Jonsson from Sweden, who was at 8-1. While the Dutchman had chosen to play an aggressive red and green deck, Jonsson had a weird red, white and blue deck with Meddling Mages, Goblin Trenches, Flametongue Kavus and countermagic.

Victor won the die roll, and he chose to play first. He got out a turn two Yavimaya Barbarian and a turn three Call of the Herd, while Jonsson answered by killing the Barbarian with an Ice. The Elephant was allowed to live, and Victor borrowed some cards that displayed a grinning "Mike Piazza, Rookie of the Year" to use as tokens.

Van den Broek attempted to flashback the Call of the Herd, but Jonsson didn't feel like letting him have two Elephants, so he Memory Lapsed the spell. He then used an Ice to tap down the Elephant on the table, while van den Broek summoned a Wild Mongrel and a Grim Lavamancer.

A third Fire killed the Lavamancer. "A lot of Fire/Ices," Victor remarked, while Jonsson merely nodded. The Swede played a Deep Analysis and a land, then he ended his turn.

Victor continued attacking. He sent the Mongrel and the Elephant over for five damage, knocking Jonsson down to ten life. The Swede needed to play something, and after thinking for a good while, he decided to summon two Meddling Mages, calling Violent Eruption and then Flametongue Kavu. Unfortunately, van den Broek had two Firebolts in his hand, and the two Mages died a blazing death.

The following attack took Jonsson down to three life, and van den Broek got out a Basking Rootwalla as well. At one life, Jonsson finally cast Goblin Trenches—but it was too late. The Swede was able to chump block for two rounds, then he scooped. 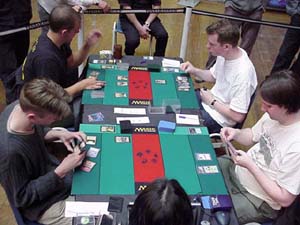 Jonsson went first in the second game, which was quite important as he was able to Counterspell a turn two Basking Rootwalla. Van den Broek then played a Fires of Yavimaya, but Jonsson saved his countermagic for the actual threats—which turned out to be Call of the Herds.

Jonsson cleared the table by Fire-ing it. Then he slapped down a Rakavolver with double kicker. Suddenly, it was Victor's turn to look a little displeased. Finally, his Call of the Herd resolved, twice. But while the Elephants hit hard, the Rakavolver both hit for five each turn and made sure that Jonsson's life total never was threatened.

At eight life to Anton's 19, Victor attempted to Flametongue Kavu the Rakavolver. The Flametongue was Counterspelled. And when Jonsson played a Flametongue of his own, the game was over for van den Broek.

While the second duel had been quite entertaining thanks to the unexpected, double-kickered Rakavolver, the third duel was even more entertaining. Van den Broek decided to play first, and got out a turn two Wild Mongrel. He got his turn three Call of the Herd Memory Lapsed, but when he summoned a turn four Jade Leech, Jonsson let it resolve, choosing instead to Repulse the Wild Mongrel.

During the following turn, Jonsson dropped the bomb—a Circle of Protection: Green. He chose to take five damage from the Leech to keep two mana open in order to be able to counter, and when van den Broek played a Call of the Herd, it was Memory Lapsed. 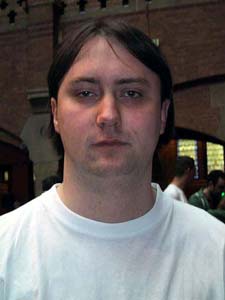 With the CoP: Green safely in place, Jonsson figured it was time to let Victor have some creatures. The Dutchman played three Call of the Herds with flashback, and at one point, he attacked for 23 points of damage every turn, only to see it all being prevented by the CoP: Green. "My kingdom for a Shifting Sky!" he proclaimed. Then he ran out of Call of the Herds, and summoned a Wild Mongrel instead.

Facing a Jade Leech, six Elephant tokens and a Wild Mongrel, Jonsson figured it was time to clear the table. His Wrath of God earned him a roar from the crowd that had gathered around the feature match table. Suddenly with no creatures in play, Victor had to re-build an army, and he cast a Wild Mongrel.

At this point, Jonsson's hand was quite good as he had basically been playing draw-go while using his Circle of Protection. He summoned a Flametongue Kavu, targeting the Mongrel. Victor had three cards in hand, but were able to use it in the best possible way. He discarded a Violent Eruption and paid the madness cost to deal two damage to the Kavu and two to Jonsson. The Swede chose to Counterspell it. Victor discarded another Violent Eruption, and this time, the Kavu went away. Then he discarded his last card, a Basking Rootwalla, and used the madness to get it into play.

But while van den Broek's play was good, Jonsson's was better. He had a Fire that killed both the Mongrel and the Rootwalla, clearing the table once again. Two Call of the Herds later, the Swede played two Flametongue Kavus, killing both the Elephants.

Victor was running out of resources, and he got out a Basking Rootwalla. A Jade Leech was Counterspelled, and playing his third Flametongue Kavu to kill the Rootwalla, Jonsson actually smiled. Van den Broek cast a Wild Mongrel to try and survive a little longer. But Jonsson had a Fire, and the game was over.