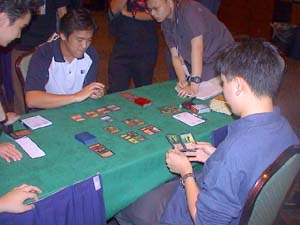 This was a rematch of the GP Kuala Lumpur 2000 quarterfinals, in which two local favourites played each other. Back then, Ti Shen won and made it to the finals. Not to be outdone, Wei Ren has trained hard and has found success as a current member of this year's Australian national team. Both are fighting to 3-0 the table.

Wei Ren has a blue-red deck with an insane amount of burn. He has 3 Firebolts, 2 Flame Bursts, 2 Fiery Tempers, Violent Eruption, Thermal Blast and Engulfing Flames! Savage Firecat makes up the obligatory bomb.

Wei Ren won the roll and kept a hand with 2 Fiery Temper, Firebolt, Engulfing Flames and Mountains. Ti Shen kept a hand that in comparison was unspectacular, having only Cartographer as the earliest play.

Wei Ren brought the first creature into play, a Phantom Whelp. With cheap burn in his hand it was possible for him to fry all the critters Ti Shen put into play (Cartographer, Nantuko Calmer, Elephant Ambush). Each time he had enough mana to attack with the Whelp and replay it. 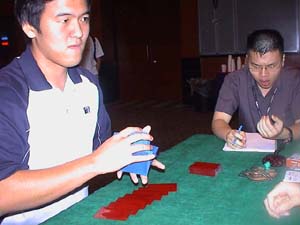 The Whelp did six damage before Tham had enough and Firebolted the Whelp. He then cast Acorn Harvest. Khoo called up an Aquamoeba to defend. When the squirrels attacked, Ti Shen flashed back the Firebolt to clear Wei Ren's board. He flashed back the Acorn Harvest and passed. Wei Ren answered with Hydromorph Guardian. Ti Shen was content to play another Acorn Harvest from his hand and wait for backup. On Khoo's turn he decided it would not do to have too many squirrel tokens in play and he used Firebolt and a flashed back Engulfing Flames to take away two more tokens. The Guardian came in, and Ti Shen chose not to block. He could start going on the offensive with the little army of squirrels he was building up. The Guardian brought him to nine.

Ti Shen flash'd back his second Acorn Harvest - going dangerously close to burn range at six life. The next turn Wei Ren traded his Guardian for a couple of squirrels and played Mad Dog. Ti Shen played a Narcissism and attacked. When the Mad Dog came over Ti Shen let it through again and was brought to 4. Wei Ren, holding Violent Eruption could barely contain himself - he only had two Mountains. He TD'd the third Mountain two turns later before Ti Shen could build up enough cards to finish him off with Narcissism.

Tham mulliganed and got back a much slower hand. Wei Ren did not have any Islands, but had burn spells and Red mana. Who doesn't keep hands with burn spells and Mountains?

Tham did not have any plays for the first three turns. Wei Ren got his Island on his third draw and made a turn-two Aquamoeba. When Ti Shen made Petravark it didn't matter as Wei Ren held Fiery Temper. He got his Island back, and cast Phantom Whelp. On his fourth turn Ti Shen held Acorn Harvest but it was useless and left mana up for Flame Burst instead. 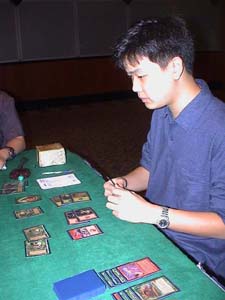 He suspected right. On Wei Ren's fourth turn he discarded a card to Aquamoeba to make it 3/1, cast Reckless Charge on the Phantom Whelp and tried to flashback the charge on the Aquamoeba. Ti Shen responded with the Flame Burst - which was ill timed because he should have waited for the Charge to resolve. The Aquamoeba switched p/t again, and survived the Flame Burst. The Charge resolved and Ti Shen took nine damage that turn instead of six. This devastating attack brought Ti Shen from 17 to 8. At least the Whelp got sent back.

Backed against the wall, Ti Shen did not have any other tricks in his hand and so cast the Acorn Harvest and enchanted a squirrel with Crackling Club to be able to handle the Aquamoeba. The Aquamoeba and Squirrel w/ Club got traded, and Wei Ren replayed the Whelp. It managed to deal two more damage before Ti Shen stalled the ground with Elephant AmbushKrosan Avenger and Wild Mongrel but by then Wei Ren had another Whelp and a Barbarian Lunatic.

Khoo's objective was to prolong the game as long as possible until he could draw enough burn to finish Ti Shen off. When Tham tried to clear the way for his Avenger to attack with a couple of Blazing Salvos, Wei Ren stubbornly refused to let his Whelp die by taking ten to the head! This prompted Ti Shen to take a gutsy play - he paid three more life to flashback Acorn Harvest, bringing him down to three. He was gambling Khoo would not TD any burn as Tish massed his attackers to swarm Khoo and take the game.

This was not to be. The squirrels were too small, and Wei Ren added a Dreamwinder to his defensive force. Ti Shen drew Blazing Salvo but Khoo's defences were too tight. A Savage Firecat allowed Khoo to go on the offensive, wiping out half of Ti Shen's army. A Firebolt off the top sealed Tham's fate.