"In my younger days, I used to do a lot of trash talk," Paul Rietzl said, breaking the silence during shuffling. Rietzl has one Pro Tour Top 8 to his name, from Honolulu, and is no doubt looking for a repeat here.

"And you grew out of it?" asked his opponent, Kevin Grove, last year's Netherlands National Champion.

"Nah, I just figured I couldn't back it up anymore."

Rietzl won the die roll, chose to play first, and had the first play with Gargoyle Sentinel. Grove just played a third Mountain and passed the turn. Rietzl summoned Howling Banshee to put both players at 17, Grove made just another Mountain and passed again. But when Gargoyle and Banshee ventured into the red zone, the latter took a terminal hit from Chandra's Outrage. (Grove at 14, Rietzl at 15.) 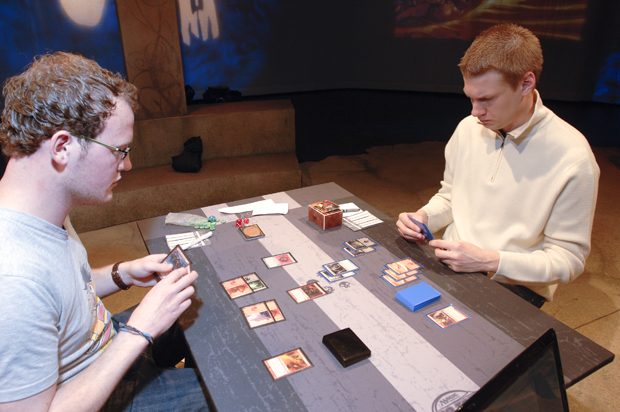 Grove put down a fifth Mountain and cast Magma Phoenix. The big fiery bird proceeded to attack, while Rietzl made Gravedigger to return Howling Banshee. With Rietzl at 12, Magma Phoenix went unblocked one last time. Fling provided an additional 3 points of damage, as did the Phoenix's triggered ability, as did Grove's Lightning Bolt.

Once again, Rietzl had the first play, with Whispersilk Cloak on turn three. Grove's first was not as passive, though, and Goblin Chieftain took Rietzl down to 18. Rietzl cast Canyon Minotaur, which was in turn burned away via Chandra's Outrage to put Rietzl at 14. He made Gargoyle Sentinel and equipped it, and his opponent cast Sorcerer's Strongbox. Rietzl had Pyroclasm to kill Goblin Chieftain and Liliana's Specter, which had forced Grove to discard Berserkers of Blood Ridge.

Grove lost the die roll on Sorcerer's Strongbox, then cast Fiery Hellhound. Rietzl summoned Berserkers of Blood Ridge and equipped it with Whispersilk Cloak. Grove cast Act of Treason targeting Gargoyle Sentinel, then used Fling to get rid of both the Sentinel and Liliana's Specter indefinitely. Meanwhile, he missed out on yet another die-roll with his Sorcerer's Strongbox. He also attacked with Fiery Hellhound with two red mana up, and Rietzl chose not to block. Rietzl went to 10, but then had Corrupt on his turn to both kill the Hellhound and replenish his life total. 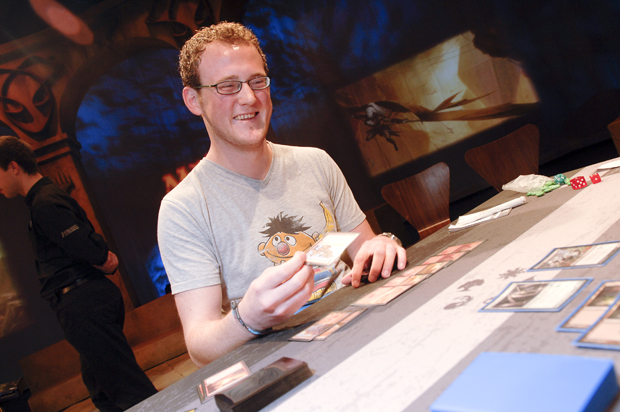 I guess that means Grove is Bert.

Berserkers of Blood Ridge went on the offense, and Grove missed yet again on his Strongbox. What a strong box indeed! The Berserkers attacked once more, and left Grove in range of Howling Banshee.

For a change, Grove had the first play, but his Chandra's Spitfire immediately caught Doom Blade. Then his Vulshok Berserker traded with Gargoyle Sentinel. Rietzl summoned Liliana's Specter to which Grove discarded Magma Phoenix. 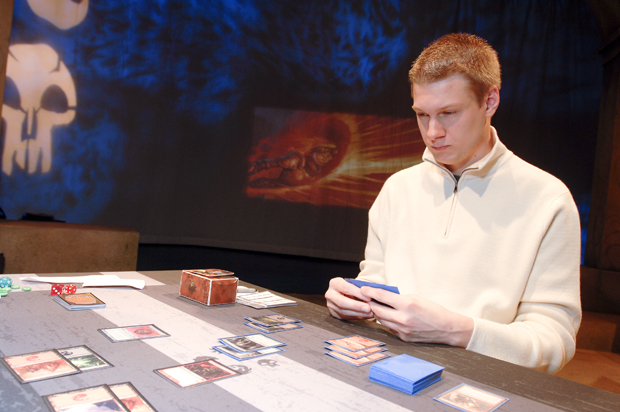 Quick PT pronunciation lesson: American Paul Rietzl's name is pronounced the opposite of how it would be if he were German.

Grove cast Sorcerer's Strongbox and made a face. Rietzl attacked with the Specter and continued the pressure with Berserkers of Blood Ridge. Grove activated (and obviously failed at) his Strongbox, then summoned Goblin Chieftain. The Goblin, however, couldn't really do anything about the Berserkers or the Specter coming his way.

Grove finally managed to crack the amazingly strong Strongbox and summoned Fire Servant. Rietzl, however, had Act of Treason to take the Fire Servant, supposedly until end of turn—in fact until the end of the game.