Round 10: Will the Undefeated Fall?

into this round Rasmus Sibast of Denmark is still undefeated, having run three consecutive tables so far to find himself at a very comfortable 9-0 with just two drafts left. Right behind him is Olivier Ruel of France, at 8-1. 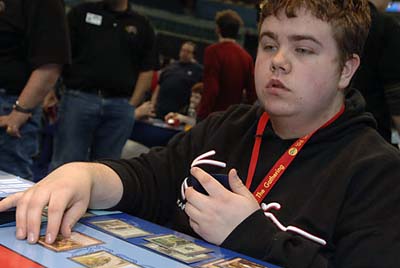 Big Oots was still undefeated at the start of Round 10.

Olivier took the roll and opted for the play. As the players shuffled up they reminisced on their decks from previous drafts this weekend, the kind of decks you get to reminisce about when you're at 9-0 and 8-1. Both players looked loose, and the atmosphere of the match was casual and laid back. The unmistakable message? It's good to be at the top!

Olivier chose to keep his first seven, consisting of Swamp, Dimir Aqueduct, Selesnya Signet, and four spells. Rasmus sent back his opener but stayed on six.

For this one, with a little help from the top of his deck, Ruel's draw transformed from somewhat clunky to streamlined beatdown machine. Turn-two Signet allowed Skyknight Legionnaire and Orzhov Basilica, followed by a devastating Belfry Spirit.

Stuck on two Forests and a Signet with his GRU deck full of giant monsters, Rasmus was little more than a spectator for this one. In fact, once the Belfry Spirit hit, he checked his next card and conceded immediately, getting only one spell onto the board before throwing in the towel.

While Game 1 was a quick and brutal affair, this one was a titanic struggle that swung wildly back and forth. In the opening it looked like Rasmus was in control, powering out an Assault Zeppelid off a Signet followed by a bloodthirsted Burning-Tree Bloodscale. Meanwhile Ruel wasn't getting much done other than a Surveilling Sprite while he developed his mana with several different karoo lands. Finally Ruel got his defense going, playing a Helium Squirter to trade with the Bloodscale.

Surveilling Sprite stepped in front of the Zeppelid to cycle a card, but Rasmus continued the pressure with a Tin-Street Hooligan plus a Gnat Alley Creeper. Olivier thought a bit and opted for a Rakdos Pit Dragon. "Thanks for opening this!" Rasmus laughed, and Ruel followed up by fanning out his hand of six after laying karoo No. 3: "Almost Hellbent!"

Beastmaster's Magemark hit the Hooligan, which swing in with the team and traded with the dragon, dealing 6 to Ruel and dropping him to 9. Thundersong Trumpeter and Petrahydrox came to shore up Ruel's defense. A Gnat Alley Creeper traded with the Petrahydrox, with Olivier dropping to a precarious 6 life, but now the Trumpeter was online and the French player's large hand continued to drop creatures into play as Rasmus' side began slowing down.

Now the Trumpeter was playing offence, keeping the Silhana Starfletcher from blocking while most of his fliers went in, leaving the Belfry Spirit back to block and potentially generate more bats down the road. During all this Rasmus occasionally got more creatures into play, but always seemed just one creature short of sending in the team for the win. 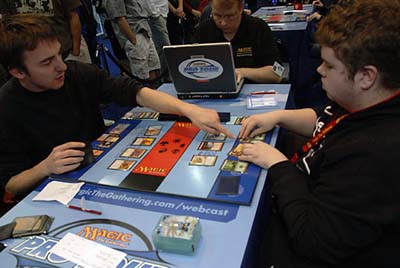 Get to the point, Olivier.

A critical play happened a few turns later. A +1/+1 Bloodscale Prowler for Rasmus swung in with Sporeback Troll to watch its back. Absolver Thrull blocked, Rasmus used both his green to regenerate, and Ruel cast a devastating Reroute to make the troll regenerate itself instead, sending the Prowler to the dumper and drawing the French player a card in the process!

Despite the swing Rasmus looked okay with a Gruul Guildmage to end the turn, threatening to win the game next turn by pitching three land to Ruel's face, but a Wrecking Ball from Ruel put an end to that immediately. Next was Streetbreaker Wurm, which Ruel answered with Court Hussar and Galvanic Arc attached to the Demon's Jester, sending a Zeppelid to the bin.

Streetbreaker had to stay home, so a Gruul Nodorog joined the team as well. With one card in hand, Olivier sent in the Jester plus both bats. Withstand saved the bat from the Starfletcher, putting another card in Olivier's hand, which turned out to be star of the show Guardian of the Guildpact. Rasmus played Thrive on everyone but the Elf, but could only send with Nodorog, activating its ability. Guardian and Belfry Spirit blocked, haunting the Court Hussar, making it Rasmus 11, Olivier 6. Olivier used Trumpeter on the Elf and sent in with a bat and the Demon's Jester for 3, with still just one card in hand.

With only a bat, Court Hussar, and Guardian of the Guildpact left back to block (and the Trumpeter tapped) Olivier looked vulnerable, but Rasmus cleared feared that last card in Ruel's hand. He thought a long time on this one, so long in fact that Ruel joked at one point "You're not slowrolling me, are you?" Ruel had a big smile and was leaning comfortably back in his chair, while Rasmus clearly struggled with his decision, an undefeated record hanging in the balance. The call turned out to be Golgari Brownscale, and just go.

It turned out to be the last chance he would get. For the last few turns Rasmus was only able to draw mana while his opponent continued sending in with the fliers. On the final turn, Ruel finally managed to get hellbent, allowing him to deal exactly the final amount needed to put the game away. 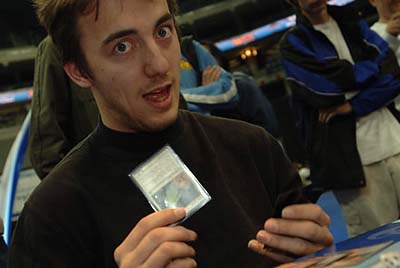 Oli shows off a most valuable Belfry Spirit.

Checking the next card since he'd had so much trouble getting Hellbent, he flipped over a Culling Sun and laughed.

"I would have been dead immediately if I played this!" He consoled Rasmus a bit as they packed up their cards and signed the results slip. "You were very unlucky to have the guildmage that specific turn, since it let me use the Reroute and let me kill the guildmage without you hurting me any." A clearly disappointed Rasmus could only nod. "There just wasn't anything I could do once the Trumpeter was there. You just had too many creatures."

He was right, and it ended up being the difference between a win and a loss, as for any of those final turns Rasmus could have swung in with the team to drop Ruel to 1, so had any other damage gotten through the result would have been reversed. But sometimes, particularly at this level, that one point can make all the difference. Fortunately for Rasmus, he hasn't had to take his first loss until Round 10. Losing is never fun, but when it has to come, it's a little easier to take when it still leaves you tied for first!