Round 10: William Jensen vs. Carlos Romao 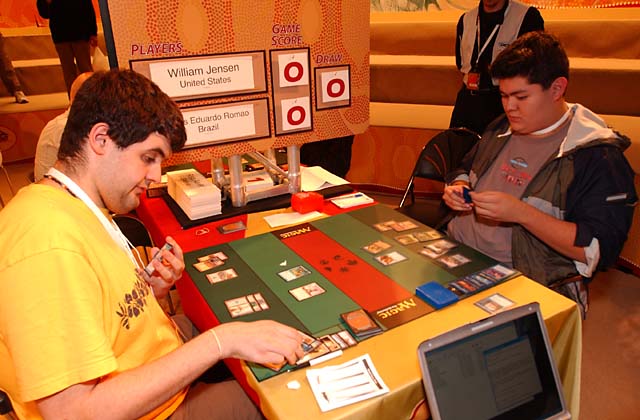 Some would say it shouldn't happen, that the collision of worlds could tear everything apart. There are those who say that it is their destiny to meet in single combat. Today it is inescapable. The Huey's must face one another.

William "Baby Huey" Jensen has been a fixture on the Tour for many years. He's also fast become a name to fear on Magic Online. He's believed to be one of the best five drafters in the game, if not the best. He declared at the start of the day that he would go 6-0, and he's already at 3-0.

His opponent, Brazillian Carlos Romao, got on the scene in 2001, when he walked away with the title at Grand Prix - Rio. The photo coverage made his face known, and he was dubbed "The Brazillian Huey".

Romao won the coin flip and got a fast start from Aquamoeba and Hydromorph Guardian. Jensen got out Skywing Aven, and blocked the next assault. Romao had Refresh. Huey bounced the Aven.

His next turn he got out a Luminous Guardian. Romao swung in again, pitching Deep Analysis for damage, and then drawing from it. Jensen made a Spirit Cairn and passed it back with one white mana open.

Romao punished him with Arcane Teachings on the Aquamoeba. He turned it sideways. Jensen blocked. Romao pumped, as did Jensen. But then it was pointed out that the Luminous Guardian had taken lethal damage. It was an embarassing moment for Jensen.

He pressed on. Aven Cloudchaser took out the Teachings. Romao traded Aquamoeba and a pitched Moment's Peace for it. Jensen made a Spirit token. With the threat of the Teachings gone, he was safe to get out Skywing Aven. Romao answered with Balshan Collaborator (mercifully, he was playing it just as a 2/2 flier). Jensen swung in and made a second Aven.

Things got somewhat more complicated when Centaur Chieftain crashed the party. Now Jensen was forced to keep his team at home. Romao pushed his fliers into the Red Zone. Jensen pushed the Spirit and Aven in front of the Chieftain, and the other Aven in front of the Collaborator. After stacking damage he bounced his Avens. Romao, forgetting his Moment's Peace in the graveyard, let his team die.

But the tragic misplay couldn't cost him when he was this far ahead. Aven Windreader, and then Nantuko Mentor joined his side. Jensen tried to keep up, building an army of Spirits while he bounced his Aven in combat. Nantuko Tracer upped the ante.

Jensen's tried to stop him with Patrol Hound and Skywing Aven, but Romao's creatures were too good. Nomad Mythmaker was good what with Arcane Teachings in Romao's graveyard, but time was something he didn't have. After chumping with his team, he scooped it up.

In Game 2 it was Jensen's turn to get the quick start. Mystic Familiar and Skywing Aven tattooed Romao while he got out a Tracer. Things looked even better when Romao had no play. 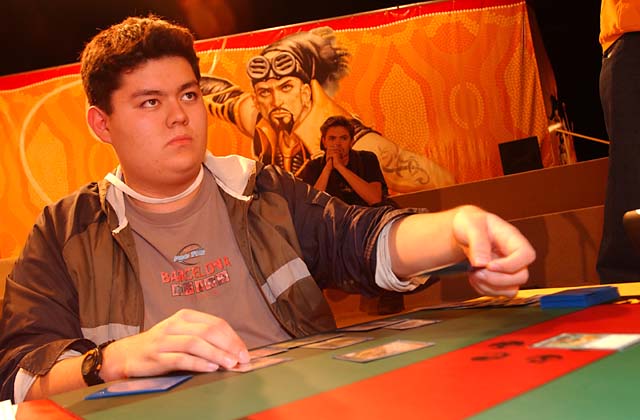 Jensen smashed in with just the Aven, signaling what was to come. Psionic Gift for the Mystic Familiar. Romao was ready with Rites of Refusal. Still, Jensen had a Phantom Nomad to increase the beats.

Romao made a Nantuko Mentor and passed it back. Jensen hit for five and played Stern Judge. At twelve, Romao decided to gas up with Deep Analysis. When Huey crashed again, Romao tried to trade by blocking with Tracer and Mentor, but Prismatic Strands for green left him without creatures.

Romao tried to hide behind Aven Windreader, but Jensen swung in all the same. He lost his Familiar and left Romao at three. Romao finally started playing creatures and Jensen had a bunch of land, so they had to wait.

Two turns later Jensen had pulled Nomad Mythmaker, and Romao had no answer. It fetched the Gift, and soon it was over.

Jensen didn't bat an eye at Romao's mulligan for Game 3, but when he dropped turn-three Nomad Mythmaker, he allowed himself a small smile. Romao came back with Balshan Collaborator, but Jensen kept it at bay with Skywing Aven.

The Aven attacked. Romao blocked and went for Refresh. Jensen shut that down with Repel. Then he pitched Ghostly Wings to save the Aven. The Collaborator came back. Jensen added a Stern Judge. 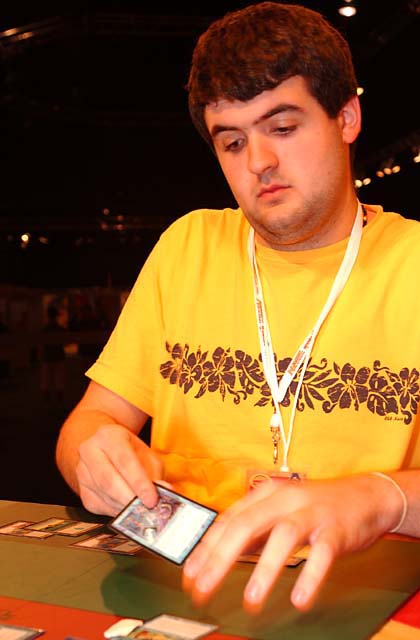 Romao wanted to make it quick, dropping Teachings on his Collaborator and hitting for four. Jensen fired back for two and remade the Aven. On Romao's next attack, Jensen blocked with the Skywing and pitched Frantic Purification to save it, killing the Teachings in the process. Mystic Familiar hit the board to earn the Teachings.

Now was not a good time for Romao to add nothing to the board. Jensen attacked for six, having Wings'd up the Judge. Keep Watch drew Romao some cards. He dropped Aven Windreader and Ironshell Beetle, armoring up his Collaborator. The Windreader fell to the assault, and Romao dropped to six.

His plan of attack was to get threshold, and hopefully trample for enough damage with Centaur Chieftain. He suicided his Beetle and bounced one of his own lands with Aven Fogbringer. He ended up trading Collaborator for the Wings'd Judge and Fogbringer for Skywing Aven, as Jensen didn't want to fall for Moment's Peace.

Mental Note got Romao to threshold, but now he had to stay home to block. Next turn he simply extended the hand, graciously accepting his defeat at the hands of the superior Huey.