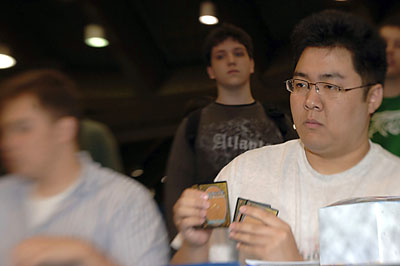 his round featured perhaps the highest-profile match possible at a National Championship: a showdown between the previous two champions. Antonino De Rosa won the title of U.S. National Champion in 2005. Remarkably, he also made the Top 8 last year, but his Sunday streak ended in the quarterfinals. Paul "Neon" Cheon won last year's Nationals in his first foray into the tournament. Both competitors are 7-2, and a win here puts the person in good shape to Top 8. Antonino has a very strong red-green deck, while Cheon's deck is a solid black-white number.

Antonino won the die roll and chose to play, and both players started with a mulligan. Cheon had the first play of the game with a turn-two Blade of the Sixth Pride, which Ant answered with Prodigal Pyromancer. Cheon bashed for 3 and played a morph. On his fourth turn, Ant killed the Pride and played a Blood Knight, missing his land drop. Cheon untapped and swung with his morph, which Ant declined to block. Cheon then played a Poultice Sliver and passed, also having missed his fourth land.

Antonino played a Skirk Shaman and ended his turn. Neon found a fourth land, turned his morph into a Whip-Spine Drake, and hit Antonino down to 12. Ant pinged Cheon at the end of the turn, then played Flowstone Embrace on the Drake on his turn, finishing it off with the Pyromancer. Ant then sent his 2/2s into Cheon before playing a land and a Riftsweeper.

On his turn, Paul cycled Marshaling Cry and found a fourth Swamp. He attacked with Poultice Sliver, Antonino blocked with Riftsweeper, and Cheon saved the Sliver with a Whitemane Lion. Ant attacked back for 4, played a fourth Mountain (his fifth land), and passed the turn with a 12-11 lead in life totals. Cheon hit Ant for 2 with his Lion and played Spitting Sliver, and Ant pinged Cheon at the end of the turn to even the score at 10 life apiece.

Antonino drew a card and sent his Blood Knight and Skirk Shaman into the red zone again. Cheon blocked the first striker with his own, but a Strength in Numbers from De Rosa killed off the Sliver while ensuring his creature's survival. Cheon played a sixth land and went into the tank. He eventually decided to hit Ant down to 8 with Whitemane Lion before playing Poultice Sliver and Necrotic Sliver. Ant shot Cheon to 6 with Prodigal Pyromancer.

Ant attacked with his busy red 2/2s to put Cheon to 2, then played Forest and Sporesower Thallid. Neon flashed back Marshaling Cry and attacked with all three of his 3/3s. Ant blocked Sporesower on Necrotic Sliver and Prodigal on Poultice, shooting Neon to 1. Seeing no way to hold off both the pro-white Knight and the "red fear" Shaman for another turn, Cheon conceded.

Cheon mulliganed to start and suspended a Corpse. He had a Trespasser il-Vec on turn three, which Antonino promptly killed with Flowstone Embrace. Cheon played Necrotic Sliver, then Ant played Edge of Autumn for a second Forest and played a fifth land.

Cheon drew first blood with Necrotic Sliver and added Poultice Sliver to his board. Ant played a sixth land and a Skirk Shaman. Cheon's Corpse came off suspend, and he attacked with Poultice and Corpse, putting Ant to 13. After combat, Cheon recruited a Quilled Sliver into the Sliver army. Ant got in with Shaman, then bounced Corpse to Cheon's hand with Stingscourger and Emptied the Warrens for four Goblins. 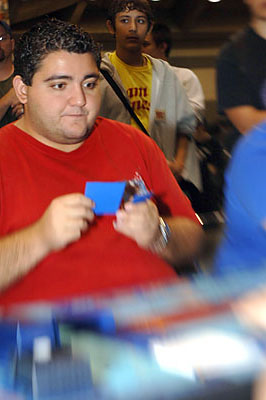 Cheon drew, thought for a minute, and passed the turn. Ant paid echo and mirrored Cheon's play of "do nothing." Neon played Death Rattle on the Skirk Shaman at the end of the turn and again passed his own turn with no play. Unfortunately for Cheon, Antonino revealed a Sprout Swarm with buyback at the end of Cheon's turn. Ant untapped and played Prodigal Pyromancer, which was promptly hit with Temporal Isolation. Cheon played land #6 and tapped out for Corpulent Corpse. Ant Sprout Swarmed twice at the end of the turn, bringing his board up to seven 1/1 tokens, Stingscourger, and the Isolated Pyromancer.

Ant dropped an Imperiosaur onto the cluttered board and ended his turn. Neon hit Ant to 10 with Corpse, and Ant brought his token total up to ten at the end of Cheon's turn. Ant did nothing of note on his turn, but Cheon had a Stonecloaker, bouncing his Quilled Sliver. On his turn, Cheon got in with Corpse and Cloaker. Ant put an Aether Web on his Stingscourger; Cheon, naturally, responded by sacrificing Poultice Sliver to kill the target. Cheon replayed Quilled Sliver with two mana up. Ant Sprouted several more times, putting him up to 14 tokens.

Antonino De Rosa advances to 8-2 and is in great shape to make Top 8 for an amazing third year in a row. Paul Cheon falls to 7-3 and will probably need to win his next three rounds to have a shot at Top 8.