Round 10: Yohei Yamamoto vs. Osamu Fujita 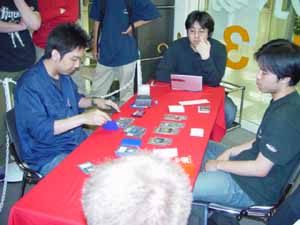 Osamu Fujita is a veteran of the Grand Prix circuit with many strong finishes under his belt. In Gary Wise’s article on Japan’s top players, Fujita was defined by his “insatiable Magic appetite”. He loves to play, no matter the time, place or format. Apparently he really likes winning too, as he came into this round in second place. Above him in first is Yohei Yamamoto, who grinded into Nationals with Psychatog, and fought his way to the top of the standings. Yamamoto has no top finishes to his name, but last year’s Japanese National Champion Kazuhiko Mitsuya also came into the tournament as a relatively unknown player, and ended up winning the whole thing. So, there is precedent for Yamamoto to win the whole thing, and with his success this weekend so far, no one should be surprised if history repeats itself.

Yamamoto missed his fourth land drop for a few turns, and Fujita played the first spell of the game in Diabolic Tutor, which was Counterspelled. Yamamoto found his fourth land and tapped out for Concentrate, leaving him vulnerable to disruption. Sure enough, Fujita played Duress and saw a hand of Force Spike, two Smother, two Circular Logic, Cunning Wish and Concentrate. After some thought, he sent Concentrate to the graveyard- a second Duress took Cunning Wish. Yamamoto took his turn, untapped and said go. Now, Fujita would need to get his spells through a wall of countermagic. However, he started getting to work with Undead Gladiator, which gave him an uncounterable way to improve his hand. Yamamoto pulled further ahead with a second Concentrate, and multiple Deep Analysis made things even more lopsided. Whatever Fujita did, Yamamoto would have the answer to since he was so far ahead on cards. Compulsion did the rest, as Yamamoto eventually found Upheaval to finish it.

Fujita mulliganed his opening hand. He played a first turn Cabal Therapy on Force Spike, which missed. On turn two Nantuko Shade resolved, and was sacrificed immediately to flash back Cabal Therapy, stripping away the Engineered Plague in Yamamoto’s hand. A second Therapy took Compulsion, and things looked good until Yamamoto played Persecute. This got a cringe out of Fujita, as he discarded his whole hand (Withered Wretch, Graveborn Muse and Diabolic Tutor). As the next few turns passed, Yamamoto began to take control of the game with Deep Analysis and Compulsion, while Fujita slammed the table with each draw. It became obvious that Fujita was not going to win, and his attitude switched from pure frustration to quiet acceptance with a touch of disappointment.