Round 10: Yuichi Ito vs. Shuuhei Nakamura 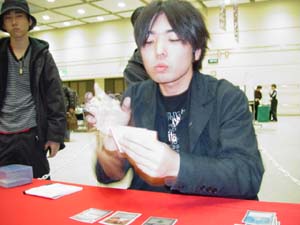 Shuuhei Nakamura is no stranger to Grand Prix greatness. Whether alone or with his cronies in S.S.D., he's made a habit of winning and he isn't likely to break it soon. Today he's playing what many believe to be Extended's best deck: Psychatog. He's managed to avoid falling to mono-red so far, but he'll need a little luck to escape it entirely. This round he faces an easier matchup: The Rock. Its pilot, Yuichi Ito, is very much an unknown quantity.

Ito Duressed away the second Leak and waited. Nakamura drew and played Lonely Sandbar. This was the moment of truth. Ito drew, played Pernicious Deed, and was done. He had no fourth land. From there, everything changed. Nakamura was free to play his Psychatog, enabling a pitch of Deep Analysis. Ito held off Deeding for a turn, but still he couldn't draw an extra land. Nakamura's Analysis provided all the lands he needed.

Finally Ito blew the Deed during Nakamura's attack. Nakamura was ready to save with Repulse, and he played out Nightscape Familiar. Ito Tutored for a fourth land and played another Deed, but by now Nakamura was running away with it. Fact or Fiction stocked his hand and graveyard, and though Ito resolved Gigapede, he had nothing to stop Nakamura's Upheaval. He conceded as soon as he saw the spell.

Again, Ito's early game was Duress, this time on the second turn. He stripped Counterspell and left Nakamura with just a pair of Cunning Wishes and Circular Logic. He hoped for a masterstroke when he came down with Phyrexian Negator, but Nakamura laughed and showed off the Mana Leak he'd just drawn. Ito was understandably disappointed. 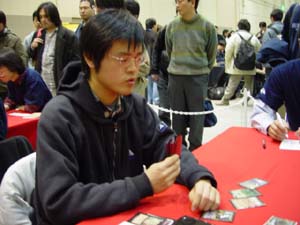 That meant that Nakamura was free to Wish for Fact or Fiction instead of Smother. Ito was again stuck on three land. Another Mana Leak from Nakamura kept him from Tutoring up a fourth. Ito Duressed again, forcing out the Fact or Fiction. Two Counterspells went to the graveyard while he stocked up on lands and Nightscape Familiar. The Duress took his second Fact or Fiction.

Nakamura got his Familiar into play, ready to dig for more action. Mana Leak stopped a Smother. Duress took his Logic, but he still had Analysis and Cunning Wish. An Edict from Ito finally got rid of the Familiar. Nakamura Analyzed twice, tapping out and giving Ito the go-ahead. All he could manage was Yavimaya Elder.

With Nakamura drawing so many cards, Ito was fast running out of action. He had another Smother for Nakamura's Psychatog, but Nakamura was fine with that. He removed his Fact or Fictions from the game, and then Wished for one of them after Ito played his last card, another Elder. Nakamura displayed no fear. His Fact or Fiction gave him another Familiar and some lands.

Ito activated both his Treetop Villages and attacked with all his creatures. Nakamura dismissed the effort with Smother and Terror on the Treetops. He continued to search with Deep Analysis and Cephalid Coliseum, but turned up blanks. Another Fact or Fiction sent two of his remaining Psychatogs to the graveyard in favor of more card drawing. Of course, the fourth turned up on his next draw step. Nakamura just shrugged. Ito put up little enough resistance that Nakamura didn't even need to dig for the Upheaval. He just removed Ito's blockers and swung for the win.