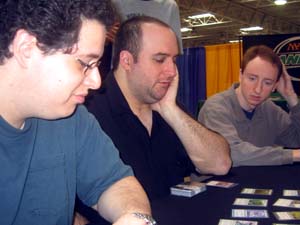 Zabutan Nemonaut required an celestial event in order to make Top 4 but they would need to beat Shenanigans in order to have that shot. On the other hand, Osyp's team could likely draw in with a victory this round. Both teams were chock full of CMU/TOGIT members but the Shenanigans skewed more toward the Jersey based TOGIT while the Nemonauts had deeper CMU roots in Turian and Wise.

Eugene Harvey was the man that banded the two groups together. The New Jersey native began playing in the Jersey based The Only Game in Town but refined his game went he went away to Carnegie Mellon University and met Turian and his cronies. Harvey was facing off against the co-owner of TOGIT, Patrick Sullivan.

"Have fun!" Patrick cheerfully announced before the match. "That is something Mike Flores said to me the first time I played him…I love it. You don't want your opponent to be lucky but if they have fun its cool."

Patrick mulliganed and kept his second set of six. Both players laid out their Sunday best but had no creatures to dress them on. Patrick had Mask of Memory and Whispersilk Cloak while Eugene selected Viridian Longbow and Talon of Pain. Patrick played an Emissary of Hope and put the Mask on it but Eugene passed the turn without a play. Patrick moved the Cloak over on the next turn--Eugene was Green-White and had no response. He attacked for two, gained two, and dug two cards deep into his deck.

Harvey played ten out of One Dozen Eyes while Patrick spilled grape soda all over the feature match area. He attacked for two more cards and found a Deconstruct for the Talon of Pain and parlayed the mana into a Clockwork Vorrac. Harvey had a Loxodon Mystic but he would have to deal with the Cloak before the elephant could negate the Mask. Patrick was digging though his deck and Luminous Angel hit play promptly on turn seven. Eugene moved the Longbow to one of his tokens and sent the turn back in an increasingly poor position.

Patrick took Eugene to twelve on the next attack and his life total went up to twenty-six. After combat he moved the Mask and Cloak to the Angel--Eugene frowned but had no responses. He did shoot the Emissary EOT after Patrick played added a Fangren Hunter to his side of the board.

Eugene tapped the Vorrac on the next attack step and Patrick grew it in response to a 7/7. Harvey fell to eight and Patrick played another Fangren Hunter. EOT Harvey shot an Angel token and flashed out a Tangle Spider.

Harvey untapped and surveyed the board for some time before drawing a hearty laugh from Sullivan with a Titanium Golem, "Okay…he is in!" Another attack from the Angel put Harvey at four and yielded and Arrest for the tapper--even if Harvey could cope with the Cloaked Angel he would still have to contend with the 8/8 trampling Vorrac.

Harvey used Razor Barrier to disenchant the Arrest and announced his attack step. He sent everyone into combat and used Roar of the Kha before blocks. Before anyone could do the math, Sullivan showed him a Tangle Spider and they went to Game 2.

"I lost," announced Mike Turian. Gary was down a game to Osyp and the circumstances required for Nemonaut to make the Top 4 were becoming more overwhelming by the moment.

Harvey reached for his sideboard and Sullivan laughed at his friend, "You're sideboarding, Harvey? This is Team Rochester. If you have to sideboard something has gone terribly wrong."

A shrug from Harvey, "It never hurts to check."

Sullivan got a mocking laugh from the crowd when he reached for his sideboard with a grin. "It never hurts to check…" He did set aside one potential card in case things went to a third game but did not reveal it to this reporter.

Harvey wanted to see a creature hit play before turn six this game and had an early drop in Arcbound Stinger. Patrick played Slith Predator and Harvey cast Empyrial Armor with one white showing. Patrick sent the Slith in and Harvey put the Stinger in the way. Patrick asked, "Awe Strike?"

Harvey saved his guy and Patrick pointed a Deconstruct at the Armor announcing, "Burn for three."

Harvey sheepishly played a Surestrike Trident while Patrick had Fangren Hunter and Mask of Memory. The Mask could only get in once on the Hunter before a Loxodon Mystic come online for Harvey. He also played a Longbow and equipped his Stinger.

Patrick's Taj-Nar Swordsmith searched out a Whispersilk Cloak. Harvey attacked with his Stinger and Tridented Mystic. He used Roar of the Kha to take Sullivan to eight and then unequipped the Trident to take him to four. Sullivan attacked with the Fangren Hunter and dug for cards. He discarded Betrayal of the Flesh without a Swamp in sight. He Rustspore Rammed the Trident and moved the Cloak over to protect it.

Harvey pinged him EOT with the Longbow and then used Razor Barrier to give his elephant protection from artifacts and attacked for the last three points of damage.

Gary was on the ropes in Game 2 against Osyp and it was possible that the third game between Harvey and Sullivan would be irrelevant.

Sullivan reached for his previously unrevealed potential sideboard card, "We're trying something." He showed off the two Viridian Acolytes that were his only means of casting Betrayal of the Flesh. He waggled his eyes and revealed the Incite War his bringing in with a waggle of his eyebrows. "If this works…" 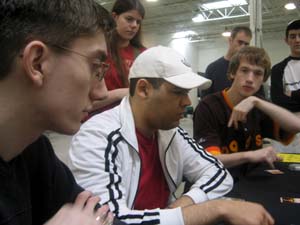 Sullivan's Whispersilk Cloaked Slith Predator found itself lagging behind in the race against Harvey's ten eyes. Sullivan was sitting on all Forests and Harvey laughed at him, "I hope you are holding Luminous Angel"

Sullivan just shook is head and shielded his cards from view, "You would not believe my hand if I recited it to you." Roar of the Kha proved to be too much for him again but the game had become meaningless when Osyp took Gary down in two straight.