Round 10: Zvi Mowshowitz vs. Alex Shvartsman 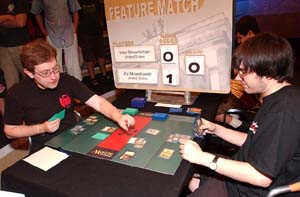 Both Zvi and Alex are among the Top 25 money winners in the game. Alex is on the low end of the list hovering around 25th place but Zvi is currently fourth and was hoping to close some ground this weekend. It's not happening for either of them. The two Illuminati teammates were wondering what they were doing in the feature match area with 4-5 records.

"You are looking at a pair of Exalted Angels," laughed Alex, comparing their records to the power and toughness of the powerful card.

"Okay he is a Tephraderm."

Zvi was not in the midst of his best tournament weekend. After a Hill Giantesque 3-3 finish on day one he had gone 1-2 in his first pod and was now facing his teammate. They both felt that Alex had the better deck and the prospect of another loss was only further darkening his mood. "I am feeling more like an Ernham Djinn—like time has passed me by."

Alex's deck is blue-white with Daru Stingers and Aven Warhawk—not to mention two Pacifisms, which are bad for Zvi's two Carrion Feeders. His deck is green-black with the Feeders, a pair of Patrons, and plenty of other cheap men topping off with Twisted Abomination and Centaur Glade.

"I think I have the best deck at the table," crowed Alex—the only white drafter at the table. "Zvi had a tougher time because he had to fight for one of his colors—intentionally so."

"What could I do? I couldn't split blue four ways. I knew I had good coverage on black—Black is going to be good in Scourge no matter what my other color is. Green was open and I went for it. I had no choice."

Zvi was on the play with a decision to make. He had a swamp and two Carrion Feeders along with some green two drops and a couple of morphs. He decided to keep the one-lander but Alex shipped back the six land and Crowd Favorites hand—not a winner for the amplify deck.

Zvi played the Feeder and followed up with a Swamp but not the Forest the needed for Stonewood Invoker. Alex had a turn two Glory Seeker. Zvi was undaunted and played a morph and swung both of his Feeders in. When Alex blocked, Zvi took the aggressive route and sac'd both of his creatures to make the one in battle a 3/3 and kill the soldier. Alex had no turn three play and passed the turn back to Zvi who was jubilant when he found his Forest, "The people rejoice!" He got in for another three and played a morph.

When Alex began to tap four land on his next turn Zvi was expecting the worst, "Stinger? How big?" When Alex only played a Dive Bomber he dismissed it, "That guy?"

Alex was defiant, "Yeah, that guy."

Zvi had a removal spell, "Well I'm gonna Swat that guy and swing in for five."

Alex took the wind out of his sails with a well aimed Pacifism that landed on his Feeder, "You know I have two of these...I thought you were a little aggressive."

Unfortunately for Alex, he had nothing to hold the ground and when Zvi played a Putrid Raptor face-up and unmorphed a Patron of the Wild a couple of turns later he was dead.

Zvi had a turn two Turncoat and followed with a Stonewood Invoker. Alex had a turn four play and Zvi asked how big. Alex swore it was huge but it was only a Dive Bomber. Alex attacked him down to 14 and played a Vengeful Dead. 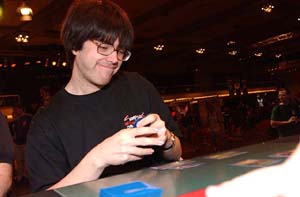 Alex played a face-down guy and tried to decide where to play a Pacifism. He opted for the Invoker because he did not want the Vengeful Dead to stick around for long. Zvi untapped and Swatted the soldier, "That's his fate—get used to it." and swung in and dropped Alex to eleven. A Carrion Feeder joined the team.

Alex played a Swooping Talon and Zvi played a morph. When Alex provoked the Vengeful Dead, Zvi put all three of his block-eligible creatures in the ay but Alex had the Aven Liberator. The end result was a +1/+1 counter on the Feeder and a loss of one life for Alex.

Zvi banged in with everyone and Alex blocked a morph—good thing too, since it turned out to be Cabal Executioner. Alex took six from the Feeder and the Turncoat. Alex killed the Turncoat with his provoker and played a Gempalm Avenger. Zvi ate the Avenger with his 5/5 Feeder and passed the turn.

There is nothing worse than a mana flooded opponent dropping a Crowd Favorites. You could hear the air escaped Zvi's lungs when it hit play. He examined his options and decided to Clutch his Feeder and swing in. Alex was fine with it, "I'm still going to chump block with Liberator one way or the other regardless of size."

The Crowd Faves dealt four and Alex did not even wait for Zvi's attack to tap his 5/5 Feeder. Zvi played a morph. When Alex provoked the 2/2, Zvi blocked and discarded a Feeder to face-up a Raptor. He untapped and played a Needleshot Gourna.

Alex was approaching a point where he could tap up to three creatures a turn. He played land number ten and made a Noble Templar with enough mana to tap a guy. Zvi played another Clutch—this time on his Raptor—and announced his attack. Alex could only tap one and his Talon took one for the team.

The Templar got in for three on the next turn and Zvi fell to five. He did the math and saw no way out and shook his head while scooping up his cards. 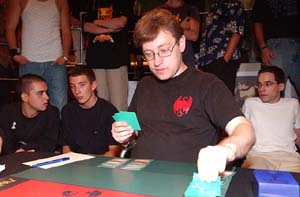 Zvi came out fast with another Turncoat but Alex was not prepared for all the damage he could get in and Pacified it on his next turn. Zvi played a morph and Alex had no turn three play. Stonewood Invoker was one-upped by Essence Sliver—still no Stingers for Alex.

Zvi sent in the morph and Alex took the bait and put his Sliver in the way. Patron of the Wild killed the Sliver and Alex gained three. He played an Aven Farseer and a morph, giving Zvi a choice of Swat targets. He decided that based on the number of morph tricks in his deck he would Swat the Farseer while he still could.

Alex played a Gempalm Avenger. Another morph from Zvi jumped in the way of Alex's mystery man. Zvi had the Branchsnap and Alex trumped it with an Aven Liberator. Zvi played his eighth land and swung in for seven with a Stonewood Invoker. They both passed the next few turns until Alex played Crowd Favorites. Zvi sent his Invoker back in but Alex had a Piety Charm and he could only take out the Gempalm Avenger.

Alex proceeded to draw seven cards in a Rush of Knowledge while Zvi had none and even though the game continued for a few turns it seemed like a foregone conclusion that Alex would win from that point. It looked like Zvi was still in it at a few times but Alex had all the cards he needed to win and he went on to do so; leaving a glum Zvi to ponder existence as a Loafing Giant.