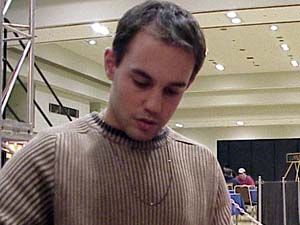 match features the French Tooth and Nail deck against Fujita's Big Red. For those who say this format is entirely lopsided towards Affinity, the success of these two decks shows that there are other options available. The Tooth and Nail deck has been the big surprise of the tournament thus far, smashing victims to pieces with Platinum Angel and Darksteel Colossus. Big Red is packed with tons of burn, and the efficient Arc-Slogger. If Ruel gets a Colossus into play, it's going to be very hard for Fujita to deal with.

Ruel's Blinkmoth Nexus died to Barbed Lightning, and he had a pair of Solemn Simulacrums. Fujita played an Arc-Slogger and shot down both Simulacrums, then attacked for four damage. Reap and Sow gave Ruel a second Stalking Stones, and he played a Talisman followed by Viridian Shaman, which targeted Darksteel Citadel (he wanted a chump blocker for the Slogger). It died to a Slogger shot, and the attack brought Ruel down to ten. Unfortunately for Fujita, most of his burn had been removed from the game at this point, and there were plenty of lands left in his library. A second Slogger followed, and Ruel stopped the assault with Oblivion Stone. On the following turn he summoned Darksteel Colossus directly from his hand, and that was more than enough to take the win. 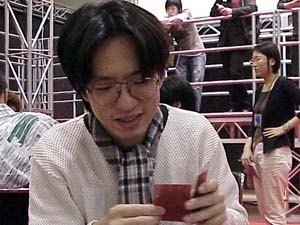 Fujita played a second turn Talisman, which was destroyed right away by Oxidize. Sylvan Scrying got Ruel his second Cloudpost, and Fujita summoned a Simulacrum. Reap and Sow with entwine set him back a bit, and put the third Cloudpost into play. On the next turn Scrying got Blinkmoth Nexus instead of the fourth Post. With plenty of mana available, Ruel played and activated Mindslaver. On end step, Fujita targeted Ruel with Pulse of the Forge, and sacrificed his Simulacrum to Shrapnel Blast. Fujita's hand contained two Furnace Dragons, Pulse of the Forge and a Simulacrum, so Ruel pointed the Pulse at Fujita and did nothing else. He untapped and played Platinum Angel, attacked with a Nexus, and put Oblivion Stone into play. Fujita played the Simulacrum, and Ruel attacked in the air for five. Fujita almost had enough mana to play Furnace Dragon, and he'd need it to get rid of Platinum Angel. Molten Rain killed the Nexus and the next attack brought Ruel to four, but the Angel was still keeping him alive. For a little added insurance, Ruel played Leonin Abunas off a Talisman to protect the Angel. Ruel put fate counters on Abunas and the Angel, and then set off the Stone to kill the Simulacrum to make the Dragon in Fujita's hand more expensive. He didn't have the time or mana to play it, and conceded.