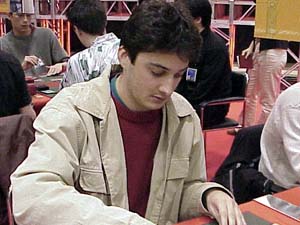 competitors have respectable records, sitting at 7-3, and both are playing a respectable deck, TwelvePost. I haven't yet seen how the mirror match plays out, but I imagine it revolves around Duplicants imprinting indestructible monsters, Oblivion Stones blowing up the world, and Mindslavers making players throw the game away against their will.

Bernardo won the die roll and thought hard before deciding to play first. Sadly, he had to throw back his hand for a new six. Or rather, a new five, as the six card hand was immediately rejected. He led off with Blinkmoth Nexus and then a turn two Talisman of Unity.

Nassif, on the other hand, resolved Sylvan Scrying for a Cloudpost. Cabral played a second Blinkmoth Nexus and took a point from his Talisman to bring Leonin Abunas into play. Nassif just fetched a second Cloudpost and took four from an attack. He then played out a Solemn Simulacrum, putting a crucial second source of green mana into play and bringing himself to seven available mana. Cabral, crippled by his mulligans, could only play a second Talisman and send the Blinkmoths for two.

Nassif put a third Cloudpost into play and entwined a Reap and Sow on Cabral's Nexus. In response, Cabral activated it with a mana from his fresh Talisman. Nassif shrugged. Cabral pointed at his Leonin Abunas, and realization dawned on Nassif that it wouldn't kill the land. He then went to search his deck, and Cabral shook his head, saying "Fizzled." Since only one half of Reap and Sow is targeted, and that target was now illegal, the whole spell was countered. Nassif could only frown and play a Cloudpost from his hand.

With his three Cloudposts, Nassif now had a ridiculous sixteen mana available. He started off by entwining a Reap and Sow on Cabral's Cloudpost, fetching out a Blinkmoth Nexus. He then played Oblivion Stone and activated it immediately, destroying Cabral's two Talismans and the Abunas. Cabral's rejoinder was an attack for one and a Solemn Simulacrum, adding a Plains to the board. The life totals stood at eighteen to eleven.

Nassif activated Stalking Stones and smashed in. Cabral chump blocked and drew a card. Nassif then added a Talisman and a Simulacrum of his own. Cabral could only Sylvan Scrying for a Cloudpost and then say go, leaving both Blinkmoths back on defense. Nassif Reap and Sow'd the new Cloudpost again, fetching out a third Stalking Stones. All three were activated before his next turn, at which point they attacked alongside the Simulacrum.

Cabral blocked Simulacrum with his own Stalking Stones and Oxidized one of Nassif's, but fell to eight. After the attack, Mindslaver came down and was immediately activated. When Cabral saw Oxidize come off the top of his deck, he scooped up his cards in disgust.

Cabral played out Tel-Jilad Chosens from his sideboard on turns two and three, but Nassif dwarfed them both with Pulse of the Tangle for a free 3/3. Cabral looked frustrated and could only answer with Solemn Simulacrum. Nassif just made a second 3/3.

Cabral played his sixth land and was done. No Cloudposts had yet entered play on either side. Both beast tokens entered the red zone and one traded with Simulacrum and a Chosen. After combat Nassif cast Pulse of the Tangle for the third time, although this time it finally hit the graveyard. Cabral summoned a Solemn Simulacrum and played a Cloudpost, giving him eight lands. Nassif, on the other hand, was still stuck on four. He Reap and Sow'd, putting Cloudpost into play.

This seemed a little dangerous, as it gave Cabral an extra mana from his Cloudpost, bringing him to nine, which is often the magic number for this deck. He did indeed have the Tooth and Nail (as well as an extra Forest, making Nassif's play the correct one), and he fetched Darksteel Colossus along with Leonin Abunas as Duplicant protection.

Nassif played a Stalking Stones and cast a Tooth and Nail that seemed awful in comparison, as he only managed to pay for the searching half. He tutored up Darksteel Colossus and Duplicant and placed them in his hand, then took nine on the chin after chumping with a beast token. A second Tooth and Nail allowed him to accomplish what Cabral had pulled off with just one, and he chose to put Darksteel Colossus and Platinum Angel into play from his hand.

Two 11/11 indestructible creatures were facing off against each other in a Pro Tour feature match. This truly is a strange world.

In any case, Cabral had a second Tooth and Nail of his own. He showed Duplicant and Viridian Shaman to Nassif, who picked up his cards.

Cabral's turn two Talisman was destroyed by Nassif's turn three Viridian Shaman. Both players then summoned beast tokens with Pulse of the Tangle, although only Cabral was able to keep his. Cabral played a Cloudpost as his fourth land, which enabled Nassif's entwined Reap and Sow on turn five. He destroyed a Cloudpost and fetched a second for himself.

Cabral could only Sylvan Scrying to try and get himself back into the game. Nassif matched him but chose to get Stalking Stones instead. He then played Oblivion Stone and sent the turn. Cabrel had no play, and a fate counter was added to the beast token.

Nassif entwined yet another Reap and Sow, killing a Cloudpost and fetching a second Stalking Stones. Cabral played Solemn Simulacrum, leaving up a Forest and threatening Oxidize.

On end step Nassif added a fate counter to his Viridian Shaman, which may have been greedy but Cabral couldn't punish him. Still, Cabral was able to untap and play his own Oblivion Stone with four mana up, threatening to add a fate counter to something. Nassif decided to use his in response, and Cabral finished up with Pulse of the Tangle, suddenly looking like he was back in the game. Nassif activated his Stalking Stones on end step. The land status of these 3/3s was important, as it means that they can survive a Stone.

On his turn, Nassif activated his second Stalking Stones and smashed in with everyone. The beast token traded with one of the lands and then Nassif killed the Oblivion Stone with a timely Viridian Shaman. Cabral simply used his Pulse of the Tangle to make two 3/3s, still keeping it in his hand as he was facing down four attackers. He also had an untapped Blinkmoth and Forest.

Duplicant came into play and imprinted a beast token. Nassif swung with the team and Cabral traded his remaning beast for the remaining Stones, falling to three and choosing to keep his Blinkmoth.

On his turn, Cabral summoned Platinum Angel. Nassif smiled and knocked on the top of his deck, but didn't find anything. The team swung and took Cabral to less than zero. At this point some spectators pointed out that something was wrong with the Duplicant situation, and after some investigation it was realized that only non-tokens are legal targets for the imprint. However, it was too late to back up the game state, so the Duplicant was allowed to stay in play at its normal 2/4 status.

Cabral then untapped and entwined a Tooth and Nail, placing Darksteel Colossus and a second Platinum Angel into play. The first one attacked for four and the game looked to be in the bag. 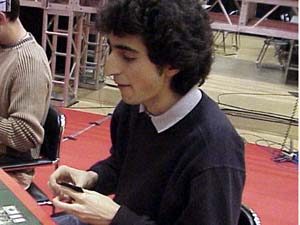 Nassif slid a card from the top of his deck on top of the card in his hand and picked them up slowly, hiding the new one. As he slid the old card downward, he perked up as he saw a Mindslaver staring back at him. If nothing else, it would buy him some time. He played it and immediately placed it in the graveyard.
Cabral couldn't believe it.

He stared at the Oblivion Stone in his hand for a full minute before throwing his cards down and conceding the match.