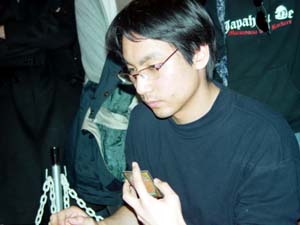 Asahara is one of Japan's top players at the moment. He won Grand Prix Kyoto, had back-to-back Top 16's at Extended Pro Tours, and won the traditional end of the year tournament in Japan. He's also extremely influential as a deckbuilder, and heads up a team that has been named the "Union of Asahara" by the younger players on it. His opponent this round, Koichiro Maki, is one of Japan's true veterans. Despite being the editor in chief of Sideboard Japan, he still has the time and motivation to be active in competitive Magic, and is able to put up strong tournament finishes.

Nothing happened until turn three, when Asahara played Neurok Prodigy. Maki made a Slith Ascendant, Asahara attacked for two with the Prodigy, and played Drill-Skimmer. The Slith got through it to become a 2/2, and Maki said go sitting back on four untapped lands. Asahara summoned a Frogmite for one mana thanks to two artifact lands, and then played a second for free. He sent his Prodigy and Skimmer into the Red Zone, and Maki did indeed have a trick, casting Roar of the Kha with entwine. Thanks to Echoing Truth, Asahara's team survived without a scratch and Maki took four damage. The massive tempo swing continued, as Asahara played Myr Enforcer for two mana, and ended his turn. All Maki could provide for defense was the Slith and an Alpha Myr, which wasn't nearly enough to put up a fight. 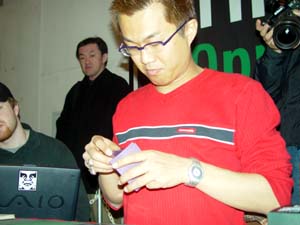 Maki played Alpha Myr, and Asahara had Gold Myr. Maki summoned Skyhunter Cub, and Asahara missed his third land drop, but was in good shape regardless. In one turn he played a Talisman and a Spellbomb, then a Frogmite and Tooth for free, leading up to a Quicksilver Behemoth to top it all off. All Maki had was a second Alpha Myr. The Behemoth dealt four damage and came back out, along with a Myr Enforcer. Maki was stuck at three land, and the second time the Behemoth attacked, he put his whole team in front of it. The 4/5 died, along with Maki's Myr and Cub. Asahara had threats left, playing Drill-Skimmer. Maki played a Razor Golem, and leaned forward on the table with an expression and body language of accepting inevitable defeat. Asahara played Neurok Familiar and Somber Hoverguard, and Maki could only stare at the Platinum Angel in his hand, and the five lands he had in play the turn before losing.