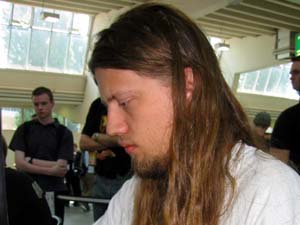 big names in the European Circuit. Yann sneaked into the second day in 63rd place. Even if they are a bit out of the running (at 21 points) we can't resist a peek at their decks.

Jelger showed his colors with a turn one Aether Vial, while Hamon played Forest and Mountain. The next turn saw another Vial, Chromatic Sphere and double Frogmite.

Hamon shook his head and took a hit. At four mana he unleashed Granulate. Wiegersma slumped in his chair. He played a Vial-powered Disciple of the Vault and buried all his nonland-artifact permanents.

Still, Hamon fell to nine and the Dutch played Arcbound Ravager. Things weren't looking up for the French. At five mana he dumped Arc-Slogger but that gave Wiegersma one final opening. He played Cranial Plating.

Jelger: "I think if I played it right I could have killed you three turns earlier."
Yann: "Really?"
Jelger: "Yes, the turn before you played Granulate."

Again Jelger had a turn one Vial but this time it didn't help him at all. An Oxidize and Tel-Jilad Justice later he had no permanents. A couple of Blinkmoth Nexus allowed him to breath again, powering out Frogmite.

But the French was not about to give up control of the table. He played Molder Slug. The Dutch thought for a while and decided on Arcbound Ravager. Viridian Shaman took care of that.

On his upkeep he was back to two lands, and could do little more than shake his head. Silently Yann Hamon set about finishing the game. A Terror took out the Molder Slug but a turn later Jelger Wiegersma shrugged and again reached for his sideboard.

This time Jelger tried a turn one Arcbound Worker. Oxidize took it away. Then another Oxidize took his Great Furnace away. Thankfully for the Dutch he had Aether Vial and Chromatic Sphere out, because otherwise he would again have nothing but lands in play.

A THIRD Oxidize took the Vial away before it could dump anything bigger than Disciple of the Vault into play. While Yann had no shortage of removal (next using a Fireball to kill the Disciple) he couldn't find his third land.

Slowly Jelger extended his game. Worker, Frogmite. Another Fireball took out the Worker. The Dutch played Thoughtcast before the French finally found his third land. The FOURTH Oxidize ate up Jelger's Vault of Whispers.

On and on the Frogmite attacked alone. Yann was at eleven. Jelger risked Arcbound Ravager and Yann Hamon hit his fourth land. 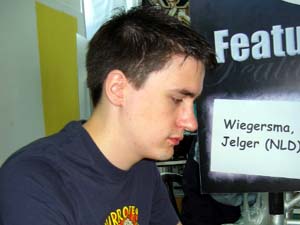 When the dust cleared Jelger had one 4/4 Nexus as his only weapon. Not too shabby. Hamon fell to seven. He untapped and drew his card. Jelger tried the Nexus attack again... Yann had no answer.

He fell to three. His next card didn't save him.