Round 11: Akira Asahara vs. Masashiro Kuroda 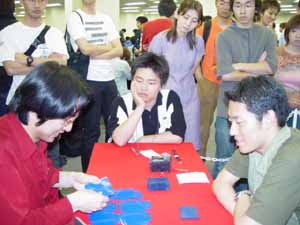 Masashiro Kuroda was the only undefeated player after yesterday’s rounds, but today hasn’t been so kind. Going into Round 11, Kuroda is 1-3 on the day, and needs this win to stay in the hunt for Top 8. Standing in his way is Akira Asahara, who is considered by many to be Japan’s top deckbuilder. He came in 12th place at Pro Tour Houston with a unique Aluren build, and proved that he’s not just a one format player by winning Grand Prix Kyoto.

Asahara opened with Grim Lavamancer, and played a second along with Llanowar Elves on turn two. Kuroda’s Wild Mongrel stopped the 1/1 assault, so Asahara cast Call of the Herd and ended his turn. Kuroda played a second Mongrel, and Asahara flashed back the Call to make another elephant. Unfortunately, Kuroda was stuck at two lands, but his Mongrels were keeping Asahara from attacking. Asahara played a morph creature and Basking Rootwalla, but still didn’t want to attack. Aether Burst killed an elephant token, and Asahara attacked with a Rootwalla, elephant and morph creature on his turn. A Mongrel blocked the morph (which flipped over to reveal Blistering Firecat) and the other Mongrel blocked the Rootwalla, pumping to 4/4 as Call of the Herd and Roar of the Wurm were discarded. Asahara opted to send Firecat trample damage over, so once damage went on the stack, the Mongrel was pumped enough to survive. Kuroda took his turn, and still couldn’t find a third land. Eventually he found Birds of Paradise, but it didn’t matter. Violent Eruption, Volcanic Hammer and a Lavamancer activation burned Kuroda out.

Kuroda’s opening hand contained two Phantom Centaurs, Roar of the Wurm, Circular Logic, and three lands. That’s a decent hand against red/green, but if Asahara got a quick draw, Kuroda might not be able to stabilize in time. After some thought, Kuroda decided to keep his hand, and Asahara was the one who took a mulligan. Kuroda’s high curve draw was helped immensely when he drew and played Llanowar Elves on turn two. Asahara had Volcanic Hammer to kill it, however, so the Phantom Centaurs would need to wait one more turn before coming out. Asahara’s turn three Wild Mongrel was countered with Circular Logic, and Kuroda got to work summoning Centaurs. Asahara had a good answer, as he played a pair of Goblin Sharpshooters. Firebolt made one of the Centaurs smaller, and Kuroda cast Deep Analysis on his turn. The Centaurs attacked, and the active Sharpshooter pinged one, so Asahara took eight damage total. Wild Mongrel added a little more leverage on Kuroda’s side, but the two Sharpshooters were a bloodbath waiting to happen. The 3/1 Centaur was killed right away, and Volcanic Hammer killed the Mongrel. This set off the Sharpshooters, and they took out the other Centaur.

Kuroda played Anurid Brushhopper, which was a very good card given the situation. Asahara sent Volcanic Eruption at it, so Kuroda discarded Roar of the Wurm and Wild Mongrel to have it stay alive. With exactly six lands in play, Kuroda flashed back the Roar, summoned Wild Mongrel, and ended his turn. Asahara flashed back Firebolt targeting the Mongrel, and Kuroda discarded a land to keep it alive. This left him with no cards in hand, so a Sharpshooter finished the job. By shooting his own Birds to get an extra untap for his Sharpshooters, Asahara got exactly four damage on the Brushhopper to kill it. Still, Kuroda had a board dominating 6/6 creature. A Sharpshooter chump blocked it once, and the second time Turbulent Dreams bounced the other Sharpshooter to clear the way for a lethal attack.

Kuroda mulliganed down to six cards. Asahara opened with Llanowar Elves, and had a turn two Mongrel, while Kuroda played a Mongrel of his own. They both butted heads, as Asahara’s Mongrel was blocked by Kuroda’s. Asahara discarded Basking Rootwalla and put it right into play to pump his Mongrel, while Kuroda discarded a Mongrel and an island. Asahara discarded Phantom Centaur and damage went on the stack; Asahara discarded Grim Lavamancer and Kuroda pitched Aether Burst, so both Mongrels lived. Asahara summoned a Sharpshooter and ended his turn, and Kuroda played a second Mongrel. Asahara’s Rootwalla and Mongrel got through for three damage, and he played a face-down Blistering Firecat. Kuroda played a Brushhopper, and Asahara attacked with his morph, the Rootwalla and the Mongrel. The Brushhopper blocked the Mongrel, and Kuroda’s two Mongrels blocked Asahara’s Rootwalla. The Firecat flipped over and the Rootwalla was pumped. As all the creatures on the board headed to the graveyeard, the Sharpshooter kept shooting Kuroda, bringing him down to four life points. A turn later, with no resources and staring down Barbarian Ring, Goblin Sharpshooter and a freshly cast Grim Lavamancer, Kuroda conceded.