Round 11: Alan Comer vs. Jeff Fung 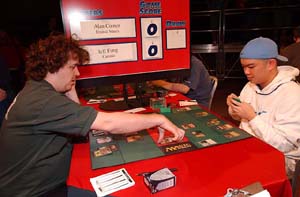 These two old school players met for the last round of the first draft on the second day. Jeff sported a dashing W/G splash red deck. Alan brought a G/R deck to the match, featuring a plethora of Ember Beasts. Fung achieved a 7-3 record by this point, having gone 2-1 with this particular deck, while Comer had fallen to 6-4 with his 1-2 performance.

Alan won the coin flip and decided to play first.

Alan blazed to a quick start with a Dwarven Grunt, followed with a Ravaged Highlands. Jeff put a stop to Alan's monumental offense with a Beloved Chaplain. Jeff also put a stop to Alan's amazing attack by cutting Comer to no land. He accelerated his own land count with a third turn Diligent Farmhand, and proceeded to drop three consecutive four casting cost creatures: Nantuko Disciple, and two Cloudchaser Eagles.

On the 6th turn, Alan finally drew into a forest, which allowed him to play a Spellbane Centaur. His creatures seemed ill suited in the match (one hosing blue, and the other hosing the red which had not yet appeared out of Fung's deck), and indeed he could only watch helplessly as the flyers began to smash away at his life total.

Over the next few turns, Alan drew into multiple lands, which allowed him to drop a Disciple of his own, along with a Skyshooter. He took a gambit to block a flyer with his newly summoned creature, in order to force Fung to pump it. He then cast Refresh on his defensive creature, and attempted to Flame Burst his opponent's Disciple. Fung flashed one of his Shelters to save his flyer.

Alan untapped and proceeded to hit the Disciple with a larger 2nd Flame Burst, sending the creature to the graveyard. He then played a Springing Tiger, and proceeded to give it Threshold on his next turn by killing one Cloudchaser with his Skyshooter, and another with a Thermal Blast. He began his comeback, by swinging with his Tiger to reduce the life totals to 14-6 in the favor of the Canadian Fung. 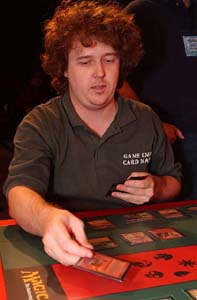 The comeback was short lived; Jeff drew a Demoralize, which powered off of a Timberland Ruins allowed him to reach threshold and make his creatures unblockable. He then Vivified one of his remaining untapped Forests, and swung into the red zone for the win.

Between games, Alan bemoaned his fate. "Stupid stall on lands", he cried out, in the accent that only men named Alan Comer have. Jeff Fung replied perfunctorily, "You should play more than 10 lands. You always play 10 lands. Extended, 10 lands. Limited, 10 lands. No Land Grant to save you here!"

Alan decided to play first, but Jeff had the first creature hit the board, a Patrol Hound on the 2nd turn. Alan kept it at bay with a repeat Spellbane Centaur the following turn, as Jeff decided to build up his forces with a Hallowed Healer. Comer would have none of this, as he enchanted his green beast with a Seton's Desire. Into the red zone went he.

On Fung's turn, a Cloudchaser Eagle 187ed the Desire, and the Hounds were unleashed upon Alan. Comer pressed back into the offense with a hasted Dwarven Strike Force (discarding a Forest randomly). Jeff counterattacked with his Cloudchaser Eagle clone. Alan counter-counterattacked straight into the Healer and Hound. He assigned all the damage to the Hallowed one, hoping to kill it, but it was Sheltered. Jeff decided not to let his creature die either, and cast a Refresh from his hand to regenerate his large dwarf, which was joined by an Ember Beast. 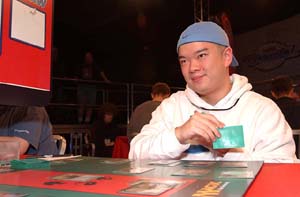 The Canadian decided to go for the throat, enchanting his Aven with a Seton's Desire of his own (or as he referred to it, "Can you deal with Air Elemental?"). Alan Thermal Blasted the Healer once he had mana available, and swung again with his Strike Force plus his beastly friend, which was blocked by a freshly summoned Chaplain. The flyer attacked to bring Comer down to 8, and Alan attacked to bring Fung down to 9 losing his DSF to a repeat Shelter, and then dropping a 2nd and 3rd Ember Beast to end his turn.

Jeff pondered the board for a moment. If he attacked for two more turns, Alan would be dead. His only defenders left were the Hound and the Chaplain, facing down three very angry Ember Beasts, and a Spellbane Centaur. If Alan drew any creature removal or a Demoralize, he would be able to attack and win the game. Jeff chose to attack with his creature, leaving Alan only a one turn clock to win.

Alan commented that he wanted to 'draw his sideboard card' to win the game. He knocked on his deck, and drew......Pardic Firecat. The haste creature could only add 2 points of damage (instead of the needed three), and the game ended with Jeff at a whopping one life point.