Round 11: Alexandre Peset vs. Bastien Perez

Both of these players are most likely unfamiliar to the average reader, but with two rounds to go they just need to win one more round to make the top eight. Bastien is playing blue-green and Alexandre has a very strange mono-black control deck with lots of creatures.. 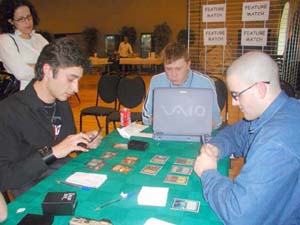 Bastien got a good draw with a second turn Wild Mongrel and a third turn Arrogant Wurm. Alexandre also had creatures on both turns two and three; Nantuko Shade and Rotlung Reanimator. He didn't block and went down to eleven on turn four. Perez added a Merfolk Looter.

Perez got rid of the Mongrel with Chainer's Edict and attacked with the Rotlung to make the life totals 16-11 in Perez' favor. With the Shade hanging back to block, Bastien decided not to attack with the Arrogant Wurm as they would only trade. He only had three lands in play, so he couldn't flash back the Roar of the Wurm discarded to Looter either.

Peset attacked with his Nantuko Shade and traded with the Arrogant Wurm, then played a second Shade. Bastien finally found his fourth land, and made the 6/6 Wurm. Alexandre had only two uncastable Corrupts in his hand so did nothing. Perez then drew a very timely Careful Study, putting Wonder in his graveyard, and giving him a Centaur Garden. This allowed him to attack with the Roar, Aquamoeba and Looter for exactly eleven damage.

This time Alexandre's draw was rather better. He played a second turn Withered Wretch and Rotlung Reanimator, and had two Chainer's Edicts for both of Bastien's two mana madness outlets.

This left Perez with only uncastable Arrogant Wurms and Roars with only had three lands in play. He conceded when Alexandre made a turn six Graveborn Muse as he was only on eight and nothing in his deck could save him.

Both players went down to six cards, but Bastien's still wasn't very good. He busted out a first turn Basking Rootwalla and pumped it once before it ran into Chainer's Edict. That was the only spell he managed in the game, as he had a handful of blue cards with no Islands. Alexandre made the game very quick by dropping two Nantuko Shades, and Bastien conceded on his fifth turn.

That ensures Alexandre a top eight slot, but Bastien may still make it in if he wins the final round.