Round 11: Andrew Grain vs Anatoli Lightfoot 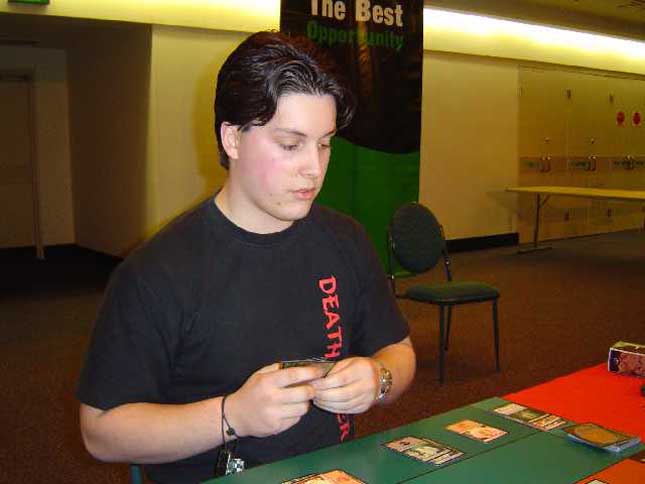 Lightfoot chose to play first and was the first to summon with a Cathodion on turn three. Grain was more than happy to make it his end of turn Shatter target, dealing Lightfoot 3 damage in the process. Grain then untapped and brought out a Nim Replica, which was matched by a Lightfoot Frogmite. The Frogmite declined to block the replica and Grain brought down a Nim Shrieker.

The frog summoned up all its courage and attacked back, with a Myr Enforcer summoned to provide some defence. Hematite Golem joined play on Grains side and he sent in the Shrieker before passing the turn across. The Enforcer came charging into the red zone bringing the life totals to 14-10 in Grain's favour. Wanderguard Sentry comes into play revealing a hand of Terror, double Moriok Scavenger and Pewter Golem. Grain then Pyrite Spellbombs it to kill the little Frogmite, and then Terrorises the Sentry, pushing all of his men into the red zone, dropping Lightfoot to 4 life.

Lightfoot decides that he should stay on the defensive and passes the turn with all three dudes coming in for the kill. Enforcer blocks the Golem and when it's pumped twice the Replica is Regressed, with the Enforcer gaining Predator's Strike to keep it alive. 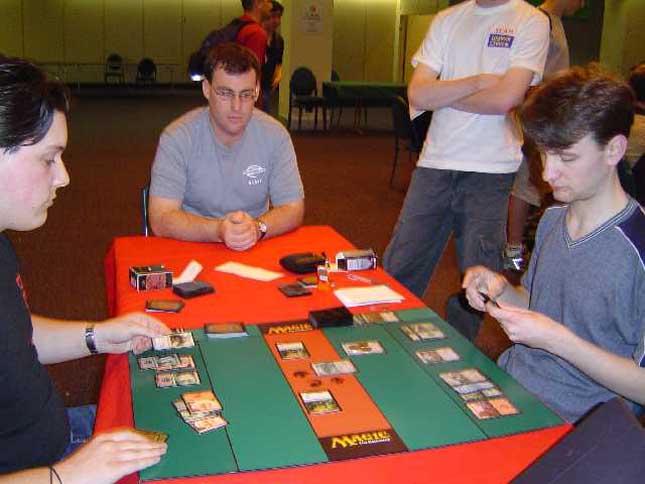 After all the defensive work the Enforcer goes on the attack, with a Fangren Hunter joining it.. Before combat Grain summons the Replica and a Leaden Myr, using the Shrieker to knock Lightfoot down to 1 life point. The Hunter and the Enforcer charge into the redzone and are met by a double block on the Hunter by the Replica and the little Leaden Myr. Goblin Replica comes into play for Lightfoot but he is unable to do anything when Grain uses Scavenger to dig back his Myr and summons it, giving the Shrieker the one power it needs to deal the final point of damage.

Lightfoot once again elects to play first and is dropped down to 19 life after taking a hit from a turn two Omega Myr. Grain backs it up with a turn three Krark-Clan Grunt and its more than happy to come into the red zone. A Frogmite is hardcast by Lightfoot on turn four and a Scavenger comes into play for Grain. With no artifacts in the graveyard it's just another monster looking to eat away at Lightfoots life points.

Lightfoot brings down Sun Droplet and when the Grunt and Scavenger come knocking on his dome the frog jumps in front of the Grunt. The Grunt devours the Myr but Predator's Strike results in the frog putting an end to the Grunt. A Replica is summoned and play passes back across to Lightfoot. The frog comes charging in and a freshly summoned Fangren Hunter is Terrored. Lightfoot eats another counter from the Droplet and comments that he's going to make himself sick eating them, diving into his wallet to bring out some coins. Another Scavenger from Grain does its job and digs back the tiny Omega Myr. Stalking Stones are dropped onto the field of play along with a Talisman of Impulse and the turn passes again. 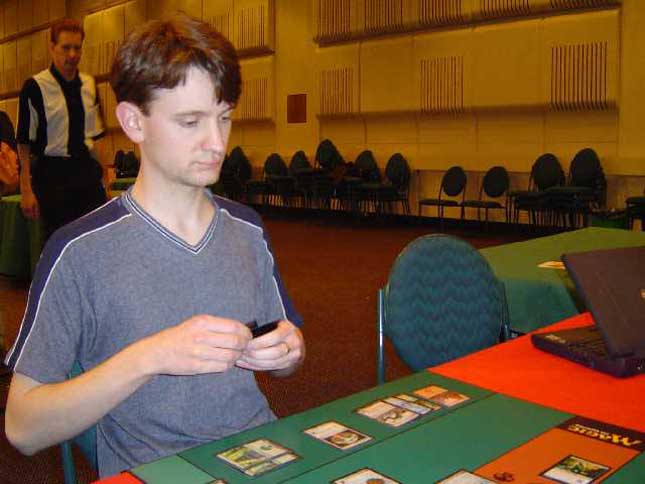 The two Scavengers and the Replicant go into battle and the Frog jumps in front of the Replicator. With damage on the stack it gets Regressed back into Lightfoot's hand. Stalking Stones gets activated and the Frogmite comes back into play for a single mana. Grain summons a Leonin Scimitar and straps it straight onto the Scavanger, pushing it into the red zone. After combat the Scimitar gets shifted back across to the untapped Scavenger. Wurmskin Forger comes in and gives the Froggie 2 counters and the Stones a single one and they both come in to the red zone. Grain wears the eight damage and sends back his two scavengers putting the life totals 7 to 10 in his favor.

Hematite Golem enters play for Grain and the two players sit back for a moment, contemplating the board. After a few moments pass Lightfoot sends the turn back without doing anything. The Scimitar slides across to the Golem making it 2/5, the perfect size to cause blobking problems for Lightfoot. Stones and Forger attempt to double block but the Forger is Terrored, leaving the stones to take on the pumped Golem alone.

A turn later the Frog is forced to chump block the Golem and when Wanderguard Sentry comes into play it reveals a Consume Spirit in Grains hand ending the game and the match on the next turn.