Round 11: Andrew Mitchell vs. David Price 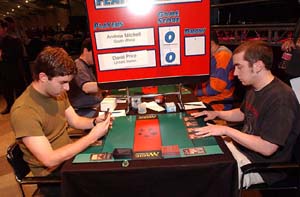 Mitchell is the first South African player to be in a Pro Tour feature match. With several Pro Tours under his belt, he is also the top player from his country. Mitchell is playing a modified version of my mono-black deck and is currently at 7-3. He needs to go 3-0-1 in order to place in the top 8. Dave Price, the King of Beatdown needs to make top 32 in this Pro Tour in order to remain on the gravy train.

Both brought mono-black decks to the table. Price's version is better suited to the mirror match due to the greater number of Mind Sludges, but Mitchell has a superior sideboard in the matchup, as it features Mesmeric Fiend in addition to Braids and Rancid Earth.

Mitchell went first – a very important advantage in his matchup – but had to mulligan to make up for it. His new hand was fine and neither player cast a spell till turn four, when Mitchell – who was already holding a Mind Sludge – cast Diabolic Tutor. He had a number of options – not least of which was getting a Swamp to ensure a greater Mind Sludge a turn from now. He had Cabal Coffers in hand, but Sludge would not get rid of all of his opponent's cards. In the end, he chose to get Rancid Earth, hoping to set his opponent back by a turn and Mind Sludge for more later on. Price also cast a Diabolic Tutor on his fourth turn, going for a Mind Sludge.

Mitchell failed to draw another Swamp over the next two turns and was forced to Sludge for four only. "Better to Sludge and be Sludged back, than never Sludge at all," he commented. Shakespeare turned in his grave. Mitchell then summoned a Nantuko Shade. On his turn, Price took out the rest of Mitchell's hand with a Sludge. Mitchell drew a Diabolic Tutor but chose to spend all his mana in order to let the Shade attack for ten, while it could. Naturaally, Price killed it on the following turn.

With Price down to ten life points, Mitchell spent his next turn to Tutor for Caustic Tar and enchant at untapped land. With no Rancid Earths maindeck, Price was under a four turn clock he had virtually no way of beating him. Price chose to spend his turn to cast Haunting Echoes. It probably would not help him win, but it would give him valuable information for the rest of the match. 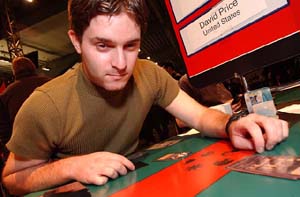 Price did not get the necessary Fiend, Rancid Earth draw – but neither did Mitchell. Price lost his Shade to Innocent Blood and then lost his Braids to an Edict. However, Mitchell lost two Shades – one to Edict, and one to the Braids sacrificial effect. Second Braids came out on Price's side of the table but Mitchell had a decent answer, getting back up to four mana and summoning a Mesmeric Fiend to hide away his opponent's Shade. Unfazed, Price summoned a third Braids in a row.

Price used Skeletal Scrying to draw three more cards in order to stay ahead of his opponent with Braids. He did not find any lands, but he did draw a Rancid Earth which would further hinder Mitchell on the following turn. Price summoned a Fiend of his own, hiding away Mitchell's currently useless Diabolic Tutor. Mitchell let his own Fiend go during upkeep to keep a pair of lands in play, top-decked another Mesmeric Fiend, but conceded upon seeing a pair of Nantuko Shades in Price's hand – Price would easily be able to upkeep Braids long enough to keep Mitchell crippled. 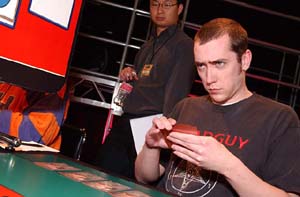 Mitchell took a mulligan but his six-card hand was quite reasonable. He summoned a Mesmeric Fiend on turn 2, hiding Chainer's Edict. Price summoned a Nantuko Shade. It was Mitchell's turn to cast Braids. Price let go of his Shade, played a fourth Swamp and cast Innocent Blood. Mitchell let the Fiend go, releasing Chainer's Edict, which Price immediately cast to deal with the Cabal Minion.

Mitchell failed to draw a fifth land in order to cast Mind Sludge. He summoned Nantuko Shade and passed the turn. Price Sludged, taking out Mitchell's hand. An Edict in his graveyard would also let him kill Nantuko Shade next turn and award him control of the game. After that happened, Mitchell summoned a second Shade.

Price summoned Braids and Nantuko Shade. He chose not to block, going down to seven life points and when Mitchell cast Edict – the last card in his hand – he let go of his own Shade. He tutored for an Edict, leaving Mitchell with nothing but four lands in play, one of which had to be sacrificed to Braids. Mitchell needed to draw an Edict or an Innocent Blood very soon, and even if he did, he would have to also deal with an influx of cards Price got when he cast Skeletal Scrying for three. Price summoned Mesmeric Fiend to protect Braids from an Edict, and Mitchell conceded.