Round 11: Antonio Corbino vs. Patrick Mello 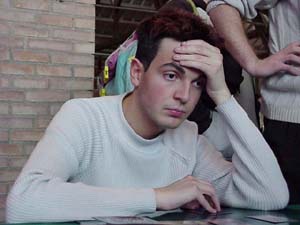 Mello won the die roll and, despite being the control player in this matchup, he was the first one to play a creature, summoning a Cephalid Looter on turn 3. Corbino killed it with Firebolt, which stalled him from playing a creature of his own for a turn. On the following turn the Italian player cast Leaf Dancer and attempted to make up the speed by casting Reckless Charge, but Mello was ready with Liquify.

Mello was holding loads of four and five casting cost creatures, but got stuck on three mana watching helplessly as Corbino summoned another Leaf Dancer . On the following turn, as he attacked with a pair of 2/2 creatures, he cast Rites of Initiation discarding his entire hand and choosing to cast Fiery Temper rather than an Arrogant Wurm via its madness cost. Down to three life points, Mello needed to draw a land on the very next turn, or lose the first game.

He did top-deck a land, summoning Teroh's Faithful to gain four life. The game went downhill fast for the overeager Corbino as Mello played a fifth land and summoned Aven Windreader, then Nomad Decoy enchanted with Strength of Isolation to save it from a Firebolt, if Corbino would draw a fifth land next turn.

Corbino launched another unsuccessful attack that resulted in nothing except him losing one of the Leaf Dancers. Mello summoned another Windreader and began to attack himself, bringing Corbino down to fifteen life points. When down to nine life, Corbino spent a turn recasting a Firebolt out of the graveyard at Mello. Down to three life points, the German player would be able to win the game in the following two turns unless Corbino drew another direct damage spell.

Mello did not give him that last turn – he activated the tapper at the end of his opponent's turn and again on his turn, then enchanted his only ground creature with Floating Shield and attack for nine, winning the game. A misplay in the early turns cost Corbino a game he could not have possibly lost if played correctly.

Corbino cast a turn 2 Mad Dog, but Mello drew Angelic Wall to buy himself time. Corbino failed to play a third land, but summoned a second Mad Dog, and Mello matched with a second wall. At this point, Corbino finally drew the third land and cast Reckless Charge on one of the dogs. Mello let it through, blocking the other one and going down to fifteen life points. Mello failed to play his fourth land again but did not have to take any damage that turn as he cast Liquify to counter the Reckless Charge cast out of the graveyard.

With both players stuck on three lands, it was about who would get out of the mana screw first. Mello summoned a Mystic Visionary and Corbino cast Longhorn Firecat, but Mello paid five life to be rid of it. Mello cast Devoted Caretaker and Corbino got out a Werebear, finally gaining access to four mana. Mello played a fourth land of his own, summoning Teroh's Faithful.

While the two Walls had been taking care of the Mad Dogs, Mello's Mystic Visionary was slowly chipping away at Corbino's life total. With access to four mana, Corbino finally cast Chainflinger, but Mello enchanted it with Stupefying Touch, and cast another enchantment on the same turn – a Floating Shield with protection from red on Devoted Caretaker. He could now doubleblock a Mad Dog each turn with Caretaker and Teroh's Faithful to take them out one at a time.

Corbino summoned an Arrogant Wurm and sent it in along with the stupefied Chainflinger. Mello traded away chump-blocking with a Wall for taking out the 'Flinger, with a fringe benefit of pointing out to his opponent (who seemed as stupefied as some of his creatures) that Mad Dog which did not attack was now on its way to the graveyard. Aven Fisher was joined by an Aven Flock, further increasing Mello's control of the game. A Mystic Zealot came out next, while Corbino refused turn after turn to doublecast his Reckless Charge on the trambling Arrogant Wurm. A Scorching Missile and a Firebolt brought Mello down to eight life points.

Down to three life and a turn away from death, Corbino was finally forced to go for it. He cast Reckless Charge on the Wurm and attacked with all of his creatures. Mello blocked, going down to six life points. A Fiery Temper in Corbino's hand was not enough, prompting the Italian player to concede.