Round 11: Attack Time vs. Phoenix Foundation 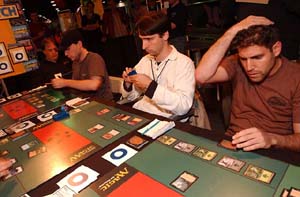 Phoenix Foundation is the picture of professionalism. Kai Budde, the poster boy of the entire pro circuit, is a fair and friendly opponent. The same thing can be said of his two compatriots, Marco Blume and Dirk Baberowski.

And then there's Tom Guevin. Ever since being scarred for life at the hands of a ruthless Shawn "Hammer" Regnier in the finals of the first limited Pro Tour ever, Guevin has been extracting revenge on Magic players across the globe for five years with his own trademark brand of trash talk and distracting antics.

Tom can still play the cards, apparently, as he, his brother Pete, and YMG pal Danny Mandel have put themselves in position to make the top 4 of this tournament. All they have to do is beat Kai, Dirk, and Marco and their vastly superior decks.

Mandel sat down across from Baberowski and was warned by Pete about the German's prowess in limited. Then Tom butted in: "Don't respect him. If you respect him you're gonna lose."

Mandel led off the game with... gulp... Carrion Rats to the surprise of everyone in the crowd. Baberowski had an equally sketchy Cabal Trainee to trade with the rats, and it was looking like this match was going to be determined by who drew the fewest awful cards.

Baberowski killed Mandel's Dusk Imp with a Lava Dart and then played a lonely Ember Beast. Mandel played a Treacherous Vampire and Baberowski answered with a Soul Scourge. Shade's Form made the vampire into a real monster, and Mandel also played a Phantom Tiger.

Baberowski then changed the pace of the game by putting Arcane Teachings on the Ember Beast. The Tiger was now a non factor, and because Mandel had only two swamps, he had to be careful about making his Vampire susceptible to a block and a ping. Baberowski then started drawing creatures of his own: Putrid Imp, Barbarian Bully, and Barbarian Outcast, and Mandel's draws were nothing but land. Baberowski decided to start attacking, losing guys to get damage through. Morgue Theft help alleviate the losses. Mandel, backpedaling, drew a Faceless Butcher, but it was too little too late.

On the other end, Pete Guevin kept a two-forest hand that contained a Werebear, a Harvester Druid, and a Sylvan Safekeeper. The Safekeeper died to Crackling Club, but the mana acceleration all lived, and he eventually drew an island and able to play most of his spells.

Eventually the game bogged down due to a high number of utility creatures on both sides. Blume had out a Nomad Decoy, a Shieldmage Advocate, and some other vanilla guys, and Pete had all his mana creatures (now including a Krosan Restorer) and Ambassador Laquatus.

At one point Marco attacked with a Patrol Hound, and Pete blocked with his Werebear and milled himself for six to get threshold. Very nice.

Pete had all the time in the world to set up a devastating Upheaval turn, and eventually did so after Far Wanderings for his one swamp. Upheaval went off, Psychatog came down, and Marco conceded.

Game 2 in the Pete/Blume match was quick and dirty. Marco played a Phantom Nomad and an Ember Beast with Arcane Teachings, and Pete didn't really play anything. The game ended in about 5 turns.

Kai, in the middle, was doing his best not to be sucked into Tommy's whirlpool of nutty behavior. Tommy traded a Benevolent Bodyguard for a Forcemage Advocate, then Kai played a Skywing Aven.

Tommy had a Hallowed Healer, claiming, "Kai plays a threat, but Tom answers! He answers the threat!" Kai then dropped a Wild Mongrel. Guevin had a Cagemail, but decided not to use it, casting Mystic Familiar instead.

Kai added a Puppeteer and a Cephalid Inkshrouder. At the end of Tom's turn, Kai debated what to tap with the Puppeteer. "Judge, can you watch this match for slow play?" asked Tom. Kai looked at him and shook his head. "You can try it, I suppose," said the German. 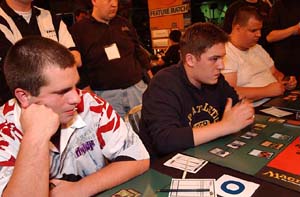 Guevin eventually drew Fiery Temper to kill the Puppeteer which allowed him to use his Healer again. But Kai kept up the pressure with an Aether Burst, then a Breakthrough for 4 with an empty hand. Tom Cagemailed the Mongrel after it hit him. The Kai played a Battlefield Scrounger, and Tom played a Phantom Flock.

Kai attacked with the Scrounger into the Flock and in response to Kai activating it, Tom hit it with a Sonic Seizure. Kai tried to activate it again, then realized he couldn't. "Oh. That was smart," said Kai.

"Aha!" shouted Tommy, "A chink in the armor! A small chink, but a chink nonetheless," he added, referring to Kai's unfamiliarity with his own cards.

The chink turned out not to be enough, as Kai played Acorn Harvest and two more creatures, and all Tom drew was land.

Mandel started off Game 2 with a decent draw, and managed to trade an Elephant Ambush token for a Dirty Wererat. He then played a Soul Scourge, Baberowski played his own, and the two traded. The Mandel played a second Scourge.

Baberowski put out his Ember Beast, and then played Arcane Teachings on it and put out a Cabal Torturer. Now every one of Mandel's creatures was in peril.

"That was a good turn," said Mandel, sighing.

Baberowski systematically eliminated all of Mandel's guys, but Mandel drew another eleventh-hour Faceless Butcher, wiping out the Teachings. But Baberowski had another Teachings in reserve, and Phoenix Foundation was up one match.

So now Tommy had to win. "Come on, guys!" he yelled to the crowd in an attempt to generate some home-field advantage, "Is this Boston or Germany?"

"BOSTON! BOSTON!" came a yell from the balcony, which turned out to be from the +b Mark LePine, here to check out what he is forbidden from participating in. 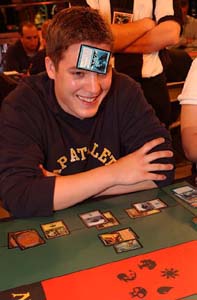 By this point, Kai was just toying with his opponentThe cheering didn't do much good. Kai came out quickly with a Basking Rootwalla and a nifty Elephant Guide for it to wear. It kept attacking and attacking, and Guevin was eventually forced to start throwing stuff in front of it. Guevin had a Second Thoughts in his hand, but couldn't get close to five mana.

Budde countered one of Tom's mildly threatening spells, and once he got Tom to one life, he stuck the other Logic he had in his hand to his forehead, showing Tom there was no way out. It was funny yet poetic – a playful reminder that no matter how much of a show Tom puts on, Kai is still the only show in town.

It was a good match to watch, but the outcome was never in doubt.